Peak Oil as a concept is finished: "Now a huge amount of money and smart people are invested in replacing much energy production dependent on oil: This scares the oil producing countries and they start reducing the price of the oil to keep people consuming their product for longer."

The libertarian website, the Foundation for Economic Education, has been celebrating the dramatic drop in oil prices:

American consumers begin the new year with a beautiful gift: low gas prices. These days, you pay twice or three times as much for fancy bottled water from the convenience store as you pay for gasoline, which has to be sucked out of the earth, refined, and transported from all over the world. That’s impressive, a tribute to the marvels of the market.
Despite it all — and despite every effort by the world’s most powerful people — all the pressure is downward. It’s a shock, to be sure, but a glorious one.

All Hail the Tumbling Price of Gas : The Freeman : Foundation for Economic Education

However, this drop seems to have very little to do with the 'free market' and much more to do with international power politics:
Saudi Arabia in oil-price war with Iran, Russia
The Saudis are playing a clever game with oil supplies. Here's how to understand it » Spectator Blogs
US/Saudi Oil Play Is Economic Warfare
Did The Saudis And The US Collude In Dropping Oil Prices?
BBC News - Falling oil prices: Who are the winners and losers?


Welcome to the age of diminishing returns

RESOURCE CRISIS: Unleashing the oil weapon against Russia: how to destroy a great empire

Oh what a tangled web we weave, When first we practise to deceive!"
Walter Scott, Marmion, Canto vi, Stanza 17

Oil price slum is equivalent to huge stimulus (around 150 billions) to the USA economy but it does have some significant side affects,
Oil is not a regular commodity. It is a strategic resource. So I think it is naïve to analyze it in supply-demand terms. It is about geopolitics and always was. Remember Iraq war with one million of Iraqis dead. Remember Libyan color revolution and Hillary reaction to the horrible death of poor colonel. And Syria war unleashed to achieve what ? It all about oil.
The key question here is cue bono in the current oil prices crash. As SA is a client state we can assume that SA actions got the USA blessing. And it was Saudi uncompromising position which played the role of catalyst. But it was of course the Wall Street which played the key role of amplifier in such a dramatic drop. Which is simply impossible without all those games in the futures market with unlimited dollars made available for the purpose. Conditions are now not equal to 2008. And population of Earth still grow.
But there is an interesting and probably not completely foreseen blowback for this mixture of overproduction crisis and intelligence operation with the goal to squeeze Russia (and as a side effect hurt Iran) -- double (or triple if we add Venezuela ) blow if you wish...

So, where are we with the notion of 'peak oil'?
Peak Oil News

The Transition Network has some answers - plus some canny comments which follow:

The Transition Agony Aunt on how to talk about peak oil 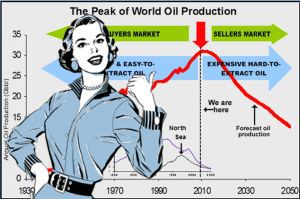 "Dear Agony Aunt.  Given that we are now seeing oil at below $50 a barrel, how is my Transition group meant to talk about 'peak oil'? Peak oil has always been one of the foundations of Transition, but should we drop it now, or how else do we explain it?  Does so much cheap oil mean peak oil as an argument is now over? In my group we can't seem to agree, so Agony Aunt, what do you think?"

We had similar concerns in our group (Transition Reading), but we now explain the situation, in public, as follows. That, in fact, the low oil price is, in fact, a symptom of peak oil. Conventional oil production peaked around 2005-2008, and year on year it is declining by about 3.5 million barrels a day. So, to maintain the global oil supply, we need to bring on-stream the equivalent of a new Saudi Arabia every 3 years.

Most of the new oil is of the unconventional kind, meaning that it is produced offshore in deepwater, from tar sands and by fracking shale. Since these are expensive technologies, no one would have bothered with them, had the price of oil not risen to $100 a barrel and more, prior to the recent crash. Indeed, the high price urged new investment, resulting in a surge in production, while simultaneously, a weakened global economy means that demand has fallen.
The supply of oil has been enlarged by renewed output from Iraq and Libya, and by OPEC’s refusal to cut production, because they want to keep their market share. As a result of overproduction against demand, the price has plummeted from a high of $115 in June 2014, to under $50 now. Since this is less than it costs to produce much of the “new oil”, many scheduled production projects will not now go ahead. The consequence will be less oil being produced a year or more down the line. Accordingly, the oil glut will peter out, and the price will rise again.

While the return of a sufficiently high price may encourage new investment, it is unlikely that we can grow production of new oil to equal five Saudi Arabias within the next 15 years, especially from sources that are more expensive and more difficult to produce from than the oil they must serve to replace. Therefore, we can anticipate a contraction of the global oil supply within this timescale.

Today's Transition Agony Aunt was Chris Rhodes, Chair of Transition Town Reading. What do you think? How would you advise our reader?  Please comment below.
Published on February 2, 2015, by Rob Hopkins

6 February 2015 - 9:34am — James Skinner
http://www.neweconomics.org/publications/entry/the-economics-of-oil-depe...
This link will show you a 2013 publication by the New Economics Foundation predicting volatility in the oil price over the next few years. This volatility happens because a high oil price seems to be correlated with recession, which is not too surprising, if you think about it - a high oil price makes everything more expensive. If the high oil price causes a recession, then the economy slows down, demand falls and with it the price of oil. The low oil price however acts as a stimulus to economic recovery. As the economy recovers, economic activity increases, the demand for oil increases and the price starts to rise again. When it reaches a certain level it hits the glass ceiling and the whole process is repeated. As the production cost of oil increases, as it will do as we approach the end of easy oil and exploit an ever larger proportion of "tight oil", the price will rise higher and the effects become more intense.
We can expect the price of oil to start rising again when the current low cost stimulates a recovery in the world economy. However nobody knows when that will be. It depends on a great many other factors apart from oil. Increasing supplies of renewable energy will help to mitigate the volatility of the oil price.

Peak Oil as a concept is finished.

Peak Oil speaks of continuously growing demand and limited supply for oil as a resource.  But limited supply is not really happening and will not happen.

Economies really don’t work like that. When a resource becomes scarce enough it just creates so much more incentive to produce an alternative. Lots of investments and smart thinking goes into the alternatives because the rewards are so great. And pretty soon the alternative takes over and the original resource becomes mostly irrelevant.  (there is more to this: it is not always wealth that motivates people; sometimes the need to help others motivates too. Example: shortage of food, Malthusian predictions and the green revolution in rice and other cultivation)

We know right now ( Feb 2015) we have some of the cheapest prices of oil in a very long time. According the Peak Oil hypothesis, that really should not be happening.  But it is happening and it will continue to happen. Because a lot of investments have been going into alternative energy, since oil was getting too expensive. Now a huge amount of money and smart people are invested in replacing much energy production dependent on oil: right in our backyard we have Tesla and Solar City).  This scares the oil producing countries and they start reducing the price of the oil to keep people consuming their product for longer. Consequently some amount of consumption will switch back to oil, which then increases the price of oil, which then makes renewable energy more attractive, which attracts more investments to renewable energy, which then scares the oil producing countries again.. You understand the cycle.   You can see the evidence in the stock market.

You will notice that when the oil prices rise, solar stock prices rise too, which seems counter-intuitive. But that is because solar becomes an attractive investment and is pulling in more money almost immediately.

The price of oil will keep bouncing up and down for a long time, but Oil as a resource just cannot really compete with free energy from Solar and Wind in the long term. Actually there will be a glut of oil towards the end. (of course businesses will still try to corner the free power in the future; again that is the way the economy works).  A tipping point will be reached when no new investments will go into oil any more, which will turn that entire business into a backwater.

Peak Oil as a concept is finished. This does not mean the job of making the world a better place is not necessary. The risk of climate change is already accelerating and needs a lot of attention.

10 February 2015 - 11:53am — Mike Grenville
Some good points in this Bloomberg article
http://www.bloomberg.com/news/articles/2015-01-30/seven-reasons-cheap-oil-can-t-stop-renewables-now

The Transition Agony Aunt on how to talk about peak oil | Transition Network
.
.
.
Posted by Jeremy Woodward at 10:50