A Point of View: In praise of wind turbines 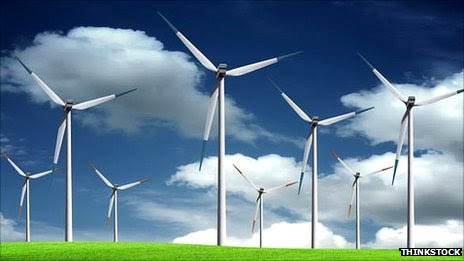 The countryside is often a man-made landscape, not a natural idyll, and wind turbines are just part of that tradition, writes Will Self.
When chanced upon unexpectedly the tips of their vast blades appear to pierce the horizon, as if these were the parts of a strange machine arranged seriatim and devised to sew the land to the sky.
Or else, looked at against the setting sun with long cloudy striate streaming behind their propellers, they can invert your entire perspective so that for a fleeting moment you imagine the Earth itself to be the envelope of an enormous airship, being powered through the sky.
Then again, when I've seen them from the window of a car moving at speed and tried to judge their size in relation to some other feature, be it hilltop or church spire, the parallax view will make of them an elegant herd of white-limbed alien creatures bounding over the terrain.
Continue reading the main story 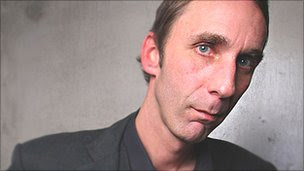 Curious they may be, the wind turbines, and to those of us who remember the landscape before their erection they may always seem a little outlandish. But no-one could reasonably claim they are objectively ugly, any more than they could say the vista of coal-fired power stations that clusters around the Humber estuary is ugly.
Indeed, viewed from across the flat striping of harvested wheat fields, the cooling towers of the Drax, the Eggborough and the Ferrybridge power stations resemble the fat-bellied trunks of baobab trees, their pale concrete bark dappled with the dark shadows cast by the steam clouds belching from their own mouths.
Even the nuclear power station Sizewell B, on the Suffolk coast - which I lived close to for a couple of years - has a strange if minatory loveliness, what with its dully-gleaming white dome, that like the compound eye of Moloch sits atop its iridescent blue plinth.
No, the power stations are not ugly and nor are the great pylons that stride away from them across Britain, their steely forms linked by crackling cables.
The pylons have an irrefutable majesty, and with their heads in the clouds and their feet in the grass, it's impossible not to anthropomorphise them. These giant humanoid figures are clearly the handiwork of smaller humanoid figures, yet this does not make them strangers to our countryside. On the contrary, this is what tells you that they belong here.
Land patterns

It was that arch-conservative GK Chesterton, inveighing against the rural purists of his own era, who said "the artificial is, if anything older than the natural", and that "in the middle of the wildest fields the most rustic child is, 10 to one, playing at steam engines".
Continue reading the main story

The vista the wind turbine revolves within whether it be the fens of East Anglia or the bens of the Scots Highlands, is a man-made one”

He understood intuitively what the work of Oliver Rackham, that great historian of the British countryside, subsequently established factually - that the pattern of land use we see the length and breadth of these isles is as much a human artefact as Stephenson's Rocket.
Rackham estimated that by the time of the Roman invasion the primordial British woodland had been cleared almost to the extent we see today. What further depredation there has been occurred in the post-war period, when hedges were grubbed up and pesticides lain down in furtherance of the monocultures so beloved of agribusiness.
The vista the wind turbine revolves within, whether it be the fens of East Anglia or the bens of the Scots Highlands, is a man-made one. However, that doesn't in and of itself mean that it is unnatural, for we are by no means the only animal on this green Earth to adapt its environment. You might as well describe beavers' dams or termites' mounds as "unnatural".
Indeed, the very idea of wilderness is itself a perverse human invention. A massive category error imposed by the British colonists in North America on a landscape of dispersed woodland and glade that they assumed to be "natural", but which was in fact the result of centuries of concerted Native American management.
Discoveries down under
It was the same in Australia, where the British arrivistes declared the land to be "terra nullius" on the basis that no human hand had mixed its labour with it - and so ripe for their exploitation.
Coming from their own immemorial associations of field, coppiced woodland, dew pond and commons, the British were unable to see the contours of the careful footprint that the Aboriginals' firing of the bush to encourage crops had left, any more than they could appreciate the cultural richness and diversity of this 40,000-year-old oral culture, replete with magic and mysticism. And besides, the British weren't altogether minded to see the Aboriginals as human at all. 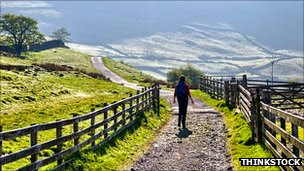 Much of the countryside has been moulded by man
But before you shake your head at the hopelessly bigoted attitudes of the remote past, it's worth considering that we have here today, in Surrey and Shropshire and Somerset, colonists of our own who are every bit as blinkered. Yes, blinkered because they cannot understand that the preservation of our countryside demands not a rose-tinted vision of it, but a steely determination to utilise it effectively.
It would seem to me that most of those who energetically campaign against the planting of wind farms in their bosky vales do so not out of a profound appreciation of the dew-jewelled web of life, but merely as spectators who wish the show that they've paid admission for to go as advertised. After all, hardly anyone really lives in the country any more and a mere fraction of the population work on the land.
For the rest, they look upon it from their terraces and their decking, they stroll a few hundred yards across it, and then they get in their off-road vehicles to drive on the road to the nearest town or city, where they sit in an office staring at a computer screen.
I once walked from my house in central London to Newhaven on the Sussex coast. It took me three days and apart from when I was traversing two areas that had been government-mandated as "areas of outstanding natural beauty" - the Ashdown Forest and the South Downs - I saw a mere handful of people in the countryside.
Dream or reality?

For hour upon hour I tramped in splendid isolation - and this in one of the most densely populated regions on Earth. It made me wonder what it is, precisely, that people feel moved to protect in our countryside. Is it its reality, the patchwork of chemically-drenched fields and pay-per-kill pheasant-stocked woodlands interspersed with crowded National Parks? Or is it a bucolic reverie the elements of which have come to them not through direct experience, but the media? 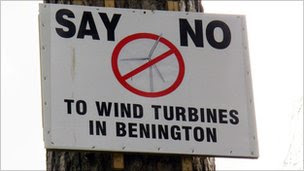 Many rural communities are opposed to wind farms
Now the government is intent on changing the planning guidelines so that effectively the presumption will be in favour of the developer. The need, they say, is for more housing and yet street upon street of terraces lie vacant and festering on the outskirts of some of our cities.
Surely, the truth of the matter is that the desire is for more green-field housing because only such habitations have the added-value that ex-urbanites seek and developers can charge for. The aim, it is said, is not only to provide housing but to stimulate growth. Growth, the zeitgeist buzzword that will, with an insistent chainsaw whine chop down and supplant that former favourite, sustainability.
Well, I daresay they will build their new dormitory communities and they will get their growth. The irony being that while the first colonists will doubtless be happy enough to enjoy their view, soon enough they will begin to complain about this or that intrusion into the wilderness. Before too long they will have grown into a community, united in opposition to the very changes that their own new estate was predicated upon.
Perhaps when the entire landmass has been so subdivided that there remains not a single portion that cannot be identified as someone or other's backyard, then, and only then, will the property owners be able to acknowledge after all that there's something really rather beautiful about a wind turbine.
Unfortunately, by then it will be too late because there won't be white blades whirring at the end of the garden, but black clouds belching from the chimneys necessary to power all that rural idiocy.
Your comments (374)