There will be a big day next month when several organisations across the country will be asking for a relook at the National Planning Policy Framework:
Futures Forum: CoVoP Day of Action in Sidmouth: Sunday 12th April 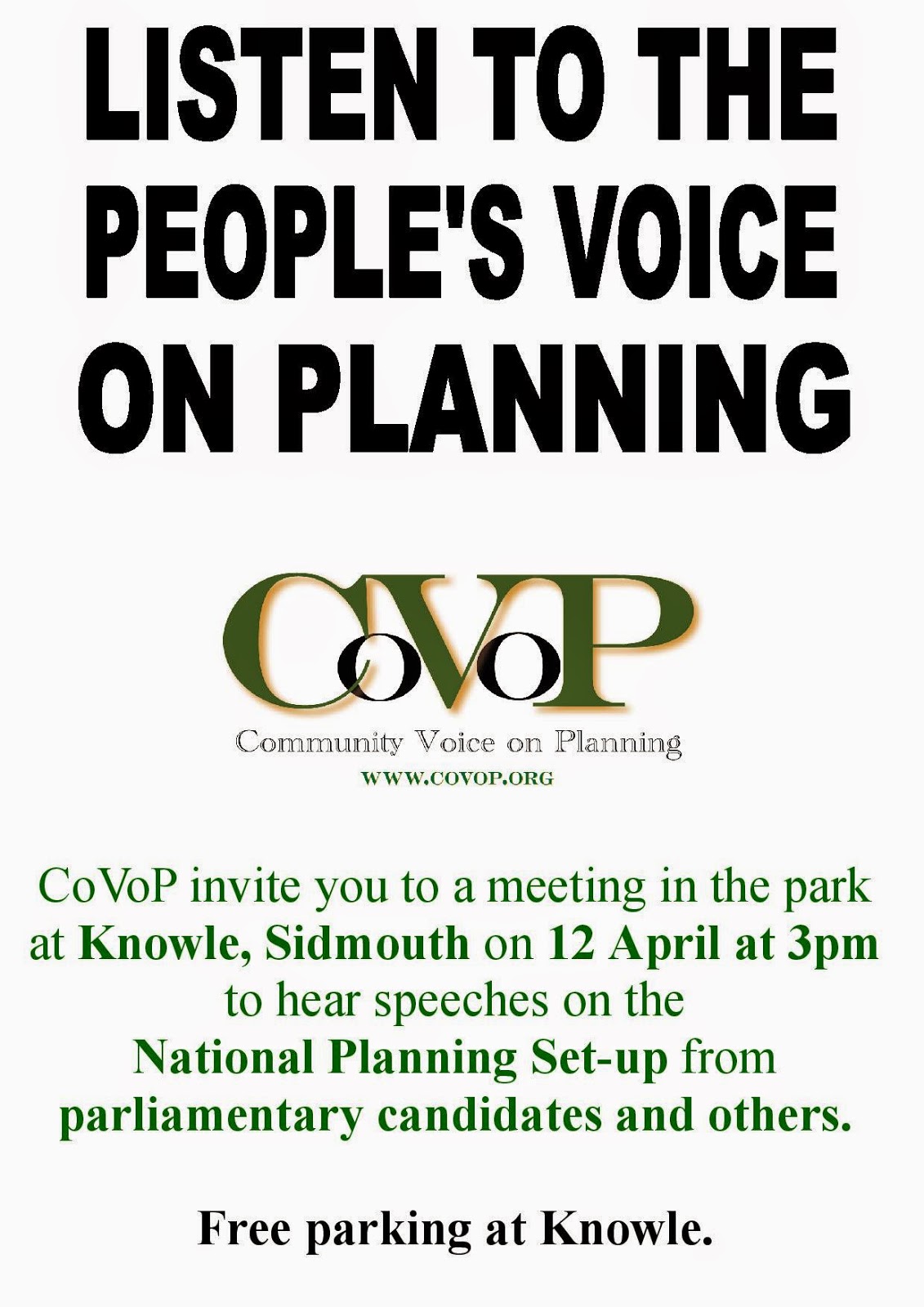 Here is the programme:

LISTEN TO THE PEOPLE'S VOICE ON PLANNING

Community Voice on Planning (see covop.org), a national network
of groups concerned with planning, has called for a DAY of ACTION on Sunday 12 April 2015

programme organised by Covop trustees with help from
Vision Group for Sidmouth:

> Time: 2.45 pm  Assemble at upper car parks and walk up to lawn terraces.
(Local groups may wish to gather elsewhere (e.g. on esplanade, at Dissenters' Room)  and walk/drive to car parks at Knowle)

> Speeches at 3 pm on the National Planning System  from parliamentary candidates and others:

plus:
a litany of contentious developments across the district from last few years

By way of background information, this letter appeared last week on the East Devon Watch blog:

COMMUNITY VOICE ON PLANNING ADDS ITS PLEA FOR PLANNING REFORM

The planning system is in urgent need of reform

SIR – How many communities across the country have fought hard and continue to fight against inappropriate development only to be swept aside by a planning system that is now so heavily weighted in favour of developers and development? The Government’s complacent response to the Communities and Local Government Committee’s (CLG) recent report on the operation of the National Planning Policy Framework (NPPF) seems to reject the suggestion that there are problems.

One particular concern of ours is the over-harsh application of the presumption in favour of development, when according to the Government many councils do not yet have an up-to-date local plan in place and are deemed not to have a five-year land supply. The Government believes that this will force all councils to accelerate their local plans and to a certain extent this is true, but at the same time they badly misunderstand local party politics. Councils do not suffer from rampant opportunistic exploitation by developers; it is local people and communities who suffer, but little is currently being done to protect them or the environment, pending the adoption of a new local plan.

The CLG supported our concerns, saying that “the NPPF is not preventing unsustainable development in some places” and that “inappropriate housing is being imposed upon some communities as a result of speculative planning applications”.

A key recommendation was that “the same weight is given to the environmental and social (dimensions) as to the economic dimension”. Whilst not agreeing with every aspect of the CLG committee report, we can at least see that it did understand the need to reform the operation of the NPPF. The Department for Communities and Local Government completely disregarded the point and clearly thinks that everything is going well.

In the run-up to the general election we are asking all political parties to publish their manifesto position on planning and, in particular, to state their position on the CLG recommendations. We also invite them to say whether, and how, they will protect people and communities from inappropriate development.

Above all we urge voters to vote only for party candidates who support proposals to rebalance the planning system.