There has been a lot of politicking around the lack of a Local Plan in East Devon.

‘Unlike some, I have never taken the rather irresponsible position of being anti-development. The fact is that for decades there has been a chronic shortage of homes, not least due to a growing and aging population. It is absolutely vital that we build more affordable houses, especially for young people in East Devon trying to get on the housing ladder.

‘However, we must ensure that a balance is struck. We live and work in a wonderful part of the world and it is absolutely crucial that East Devon retains its beautiful landscape and unique character.

‘A completed Local Plan is essential as it would be drawn up in consultation with local people so that they could determine where development should and should not go. However, many of my constituents feel that EDDC’s lack of a Local Plan is allowing developers free rein which is leading to overdevelopment in areas such as Woodbury Salterton.

‘Today I call on EDDC to make the completion of its Local Plan an absolute priority and, in the meantime, ensure that the green light is not automatically given to developers. Inappropriate planning applications must always be rejected’.

From the Herald last month:

MP: Only Local Plan can save Clyst Valley

The only way to stop Clyst St Mary doubling in size is to get a local plan, according to East Devon MP Hugo Swire.

Mr Swire was speaking at a public meeting at Clyst St Mary village hall to discuss planning applications in the village.

He said: “I do not want there to be an urban sprawl, but there is huge pressure to build houses in the United Kingdom.

“We do need a local plan – the idea was, for the first time, to devolve responsibilities for where the planning is going to the local community.”

East Devon district councillor Paul Diviani has said that the authority’s local plan is unlikely until after the May general election.

East Devon District Council presented its draft Local Plan to a government inspector in February 2014, but was told there were ‘serious failings’ with the evidence it had used to calculate the number of new homes needed in the region.

Here is the attachment: 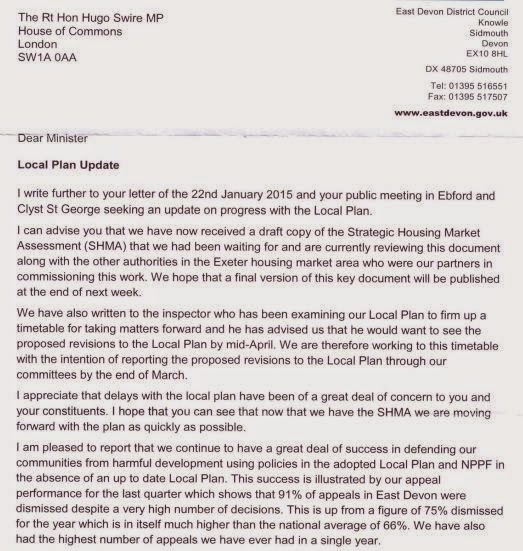 At Thursday evening’s meeting at Clyst St Mary, East Devon’s MP, Hugo Swire, dodged my question about pro-development national planning rules - and instead put the blame for speculative development in the district squarely at the door of East Devon District Council.

Around 100 people turned out to hear Mr Swire’s views on their village being swamped with housing developments, which would grow the village by over 100 per cent, if approved, or allowed on appeal.

Mr Swire was being asked many questions about the government’s position on a range of issues associated with development.

The repeated mantra from Mr Swire, was that East Devon District Council was solely responsible for the planning mess East Devon is in, and that every community should draw up a neighbourhood plan. A lengthy, time-consuming and expensive process.

I asked Mr Swire what his plans were for amending it, but cut me off before I had finished speaking, chastised me for being late and returned to his mantra of the local plan being the problem and urging Clyst St Mary to put together a neighbourhood plan.

I challenged him again on this, but he continued to evade the issue that is so toxic to the Conservatives - and to his election campaign.

Before the NPPF was published in 2012, there was never a need for communities to work themselves to the bone on neighbourhood plans - because even when local plans were not up-to-date, there was enough protection for the countryside in national policy for communities to be relatively safe. Not as safe as they would be if there was an up-to-date local plan of course, but nothing like the best ever get rich quick scheme for developers - that is the national planning policy framework.

Mr Swire must be pushed on this and cannot be allowed to get away with not addressing this issue that is so central to East Devon’s future.

From the letters page of the latest View from Sidmouth: 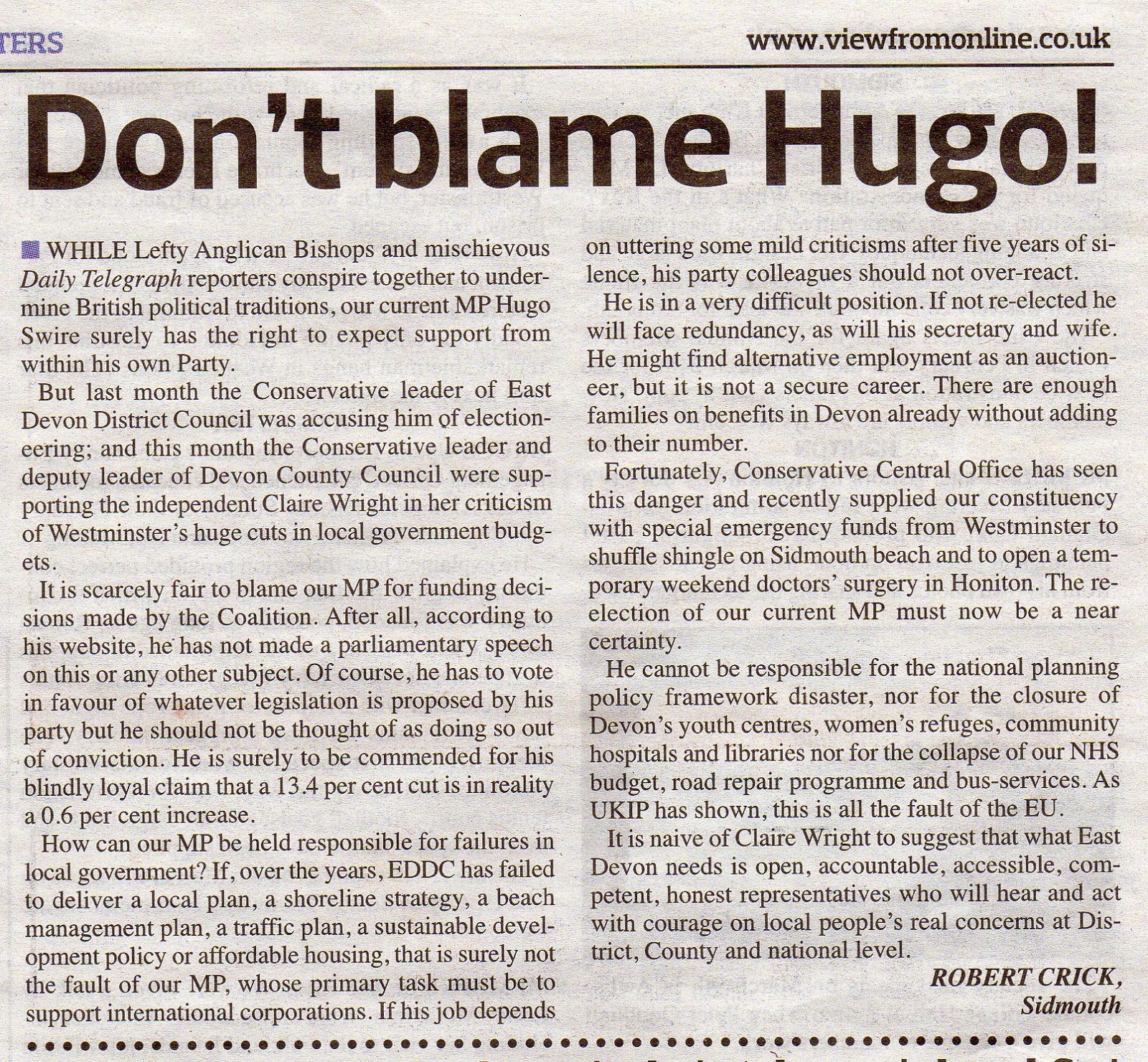 From the leader of the East Devon Alliance, Cllr Ben Ingham:

I write to you following your article “Further delays to district Local Plan” of February 17th.

Contrary to what council bosses say at East Devon District Council, further delays to the East Devon Local Plan are not inevitable, nor are they acceptable. The long awaited Strategic Housing Market Assessment (SHMA) report, a key ingredient to completing the final version of the Local Plan, must be made public as soon as it is available.

This must happen at the earliest opportunity so that we can complete the Local Plan as soon as possible. The public have every right to know what is in the SHMA report and how it will effect East Devon. After all, they paid for it.

If the Conservative leadership of EDDC try to withhold the SHMA report until after the May elections, we can only conclude they have something to hide from the electorate; something they do not want us to hear. We already know the Tories have behaved in an incompetent manner for over three years, we also know they are prepared to put East Devon’s rural landscape at risk. Now we know just how contrived they are prepared to be in order to save their own skins.

The SHMA report must be published this month. Council leader Paul Diviani said: “Because of the forthcoming local and national elections, this would not appear to be a viable route to follow”. That just is not true and he knows it.

What more evidence do we need to see that the East Devon Conservatives have become a spent force, clutching at straws in order to survive? Deploying desperate measures to avoid an ignoble demise. Like a crazed gambler, they bet on yet another self-indulgent policy to win them through, only to be humiliated by their lack of vision, lack of understanding and a lack of coherent leadership. I suggest they need a well-earned rest; time to reflect on why they have become so out of touch with East Devon’s vision.

In the meantime, East Devon needs a sea change for the better. We have to put East Devon first at our district council, not party politics. We must make East Devon District Council a democratic arena where the hopes and aspirations of us all are championed, not just an elite few who quite frankly, hold the rest of us, even their own party members and councillors, in contempt.

The change can happen; East Devon can make it happen. As things look now, there should be in excess of 40 independent candidates standing across East Devon, giving people the chance to vote for a real change.

So if people really care about East Devon’s future, I challenge each of your readers to prove it. Support the independent candidates across East Devon. Put East Devon first and vote for change. Together we can do so much better than this and East Devon deserves it.

Pulman's View From...: Local Plan delays are ‘not inevitable or acceptable’ | East Devon Alliance
.
.
.
Posted by Jeremy Woodward at 03:30