Fortfield Hotel ... to ... Sanditon apartments >>>>>>>>>> How much exactly will Sidmouth benefit from S106 cash from developers?

The original hotel was quite something: 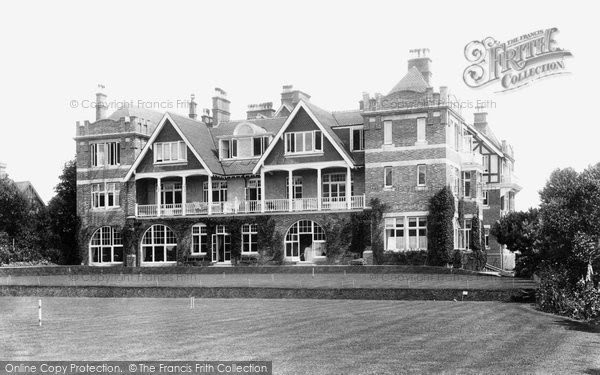 It was then made derelict:
Futures Forum: Fortfield Hotel ... to ... Sanditon apartments

The hotel was then hit by a fire in December 2010:
BBC News - Crews tackle derelict Fortfield Hotel fire in Sidmouth

... and by another in January 2011, which led to its demolition:
BBC News - Fortfield Hotel in Sidmouth faces demolition after fire

Almost immediately, a campaign began by Sidmouth Councillors looked to secure the cash for the town:
Futures Forum: Fortfield Hotel ... to ... Sanditon apartments ... How much exactly will Sidmouth benefit?

SIDMOUTH representatives have vowed to fight until the final minute for £1.5million up for grabs after a developer was given the go-ahead to replace an historic hotel with homes.
Town ward district councillors fear their own authority will splash a huge community cash settlement - from the transformation of the former Fortfield Hotel site - across East Devon. One fears Sidmouth might not even benefit from half of the money.
ZeroC will begin building 31 apartments in March. Eighty-eight per cent of the developer’s cash is to compensate for the absence of tourism and ‘affordable’ housing elements in its scheme.
East Devon District Council (EDDC) Cabinet members are set to determine how the money will be spent in January.
Sidmouth councillors Sheila Kerridge, Frances Newth and Peter Sullivan are concerned other areas will get a slice of the funding. “It’s doubtful we’ll get the full amount,” said Councillor Kerridge. “I’m concerned we won’t get the lion’s share. It could be less than 50per cent. We’re going to lobby until the last minute trying to get a good proportion for Sidmouth. It’s due to us.”
Cllr Newth said: “We want to see as much of the money as possible benefit of our community – and that’s what we’ll fight for. Sidmouth needs to be compensated.”
Cllr Sullivan added: “There are different people within East Devon looking at that money. It’s a substantial amount.”
Planning permission was issued to ZeroC after the firm agreed to hand over £1.325million towards affordable housing and tourism, and £114,000 for open space provision – all district council issues.
A £58,000 contribution towards education provision and £3,000 for local transport initiatives – county council matters – will also be made.
An EDDC spokesman said: “At this time we’re not in a position to speculate on how members may want to spend the money.” He added funds would come forward in three equal instalments as the development progresses, and it “might be a while” until all of the money has been paid.
The council said in May that the cash would be spent “to benefit the whole district”.
FORTFIELD: Sidmouth’s fight for £1.5million - News - Sidmouth Herald

The concerns have resurfaced again at the Town Council:

Sanditon flats in Sidmouth. Photo by Terry Ife ref shs 8655-48-13TI
A £1.5million promise to Sidmouth looks likely to be broken so affordable housing can be built elsewhere in East Devon – unless representatives fight for it.
The seven-figure ‘Section 106’ settlement was meant to compensate the town’s tourism industry after apartments were built on the site of the fire-damaged Fortfield Hotel.
The final payment to East Devon District Council (EDDC) is due when the last of the Sanditon flats are occupied – but after talking with one of its officers, businessman Richard Eley has cast doubt on whether authority bosses will keep their promise.
“If it was a straight choice between spending on affordable housing outside of Sidmouth or tourism and economy in Sidmouth, then they would spend it outside of Sidmouth,” he told the town council’s tourism and economy meeting on Monday. “She [the EDDC officer] was quite clear that was the instruction she’d had from the chief executive.” He also said that the tourism and economy allocation was likely to be £300,000.
Councillor Ian Barlow said: “Weren’t we promised that the money was coming to Sidmouth, and it was ring-fenced because we were losing the hotel? This is what our district councillors are supposed to do. It’s our money, now go on and get it.”
District councillor Chris Wale took umbrage with his colleague’s comments, saying: “We work damn hard behind the scenes and you say get on with it. There’s a process, sir. We know what the processes are, but it doesn’t mean to say we get our own way.”
The money is being paid on the 10th, 20th and 27th occupations of the flats – the last of which is likely soon.
Town councillors formed a taskforce last year to discuss how to allocate the cash, hoping that their proactivity would help secure it for Sidmouth.
Residents were invited to have their say, but the final decision will be made by district chiefs.
Cllr Ann Liverton said: “We need to emphasise the importance of economic tourism. £300,000 – it’s not a lot. It’s as if the economy doesn’t matter. We do need affordable housing, but we won’t if we haven’t got an economy here.”
An EDDC spokesman said no decision would be made until all of the Section 106 payments had been made by the developer. “Once the final payment has been received, work will begin on investigating the options available,” he added. Affordable housing and tourism are certainly two of the main contenders for a share of the funding and it will be for elected members to decide how much is spent where.”
Fears we will lose £1.5m cash bonus - News - Sidmouth Herald