Of hobbits and humour: Blueprint for Revolution

Spot the Hobbits at the foot of the pine in the Knowle gardens...

"It is not institutional elites who bring about change but rather it is hobbits, who rely on their creativity to build a movement and have a lasting impact."


Hobbits will inherit the earth | peacefare.net

On today's Start the Week, the topic of 'anti-establishment' politics was looked at in full:

From Fringe to Frontline?

On Start the Week Tom Sutcliffe explores the fracturing political landscape and the rise of anti-establishment parties.
The politics lecturer Robert Ford explains the increasing support for the SNP, UKIP, and the Greens and what that means for the forthcoming General Election.
Catherine De Vries is a Professor of European politics and compares what's happening across the Channel.
Srdja Popovic was one of the leaders of Otpor - the movement that played a pivotal role in bringing down Slobodan Milosevic - and he advises how using humour, rice pudding and lego men can change the world.
The Royal Opera House is staging Brecht and Weill's Rise and Fall of the City of Mahagonny, a satire on money, morality and pleasure-seeking, and its director John Fulljames seeks out the contemporary resonances in this story of consumerism and loss of humanity.

BBC Radio 4 - Start the Week, From Fringe to Frontline?

But: can an activist using humour change the world? 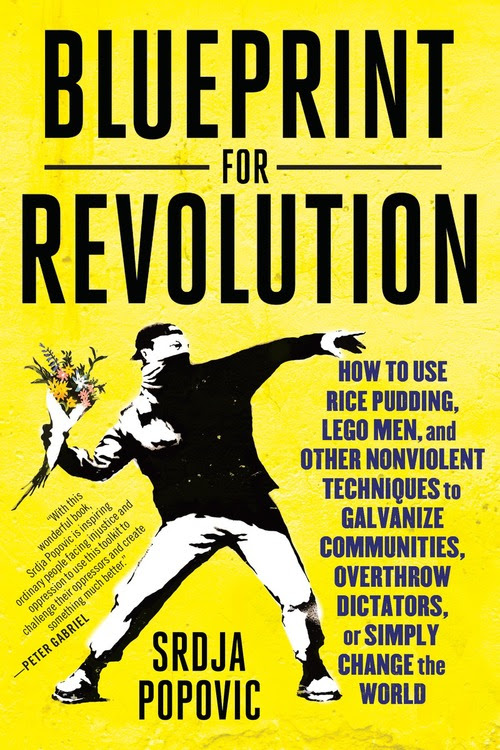 A handbook for anyone who wants to effectively (and peacefully) improve your neighborhood, make a difference in your community, or change the world

Blueprint for Revolution will teach you how to
• make oppression backfire by playing your opponents’ strongest card against them
• identify the “almighty pillars of power” in order to shift the balance of control
• dream big, but start small: learn how to pick battles you can win
• listen to what people actually care about in order to incorporate their needs into your revolutionary vision
• master the art of compromise to bring together even the most disparate groups
• recognize your allies and view your enemies as potential partners
• use humor to make yourself heard, defuse potentially violent situations, and “laugh your way to victory”

Advance praise for Blueprint for Revolution

“With this wonderful book, Srdja Popovic is inspiring ordinary people facing injustice and oppression to use this tool kit to challenge their oppressors and create something much better. When I was growing up, we dreamed that young people could bring down those who misused their power and create a more just and democratic society. For Srdja Popovic, living in Belgrade in 1998, this same dream was potentially a much more dangerous idea. But with an extraordinarily courageous group of students that formed Otpor!, Srdja used imagination, invention, cunning, and lots of humor to create a movement that not only succeeded in toppling the brutal dictator Slobodan Milošević but has become a blueprint for nonviolent revolution around the world. Srdja rules!”—Peter Gabriel

“Blueprint for Revolution is not only a spirited guide to changing the world but a breakthrough in the annals of advice for those who seek justice and democracy. It asks (and not heavy-handedly): As long as you want to change the world, why not do it joyfully? It’s not just funny. It’s seriously funny. No joke.”—Todd Gitlin, author of The Sixties and Occupy Nation

Hobbits Will Inherit The Earth
February 19, 2015

"There are few individuals with a history of working in such close proximity to conflict who exhibit quite the optimism and exuberance as Popovic. In an event held at the Johns Hopkins School of Advanced International Studies on the morning of February 10, the author of the recently published Blueprint for Revolution: How to Use Rice Pudding, Lego Men, and Other Nonviolent Techniques to Galvanize Communities, Overthrow Dictators, or Simply Change the World discussed his vision for effective social mobilization to execute non-violent revolution."

Read the full review of Srdja's lecture at the Johns Hopkins School of Advanced International Studies here: Hobbits will inherit the earth | peacefare.net


Hobbits Will Inherit the Earth — Blueprint for Revolution

Srdja Popovic was one of the founders and key organizers of the Serbian nonviolent resistance group Otpor! Otpor!’s campaign to unseat Serbian president Slobodan Milosovic found success in October 2000 when hundreds of thousands of protestors converged upon and took over the Serbian Parliament, effectively ending Milosevic’s rule. After the revolution, Popovic served a term as a member of the Serbian National Assembly 2000-2003.