"The political system is so dysfunctional people have to find their own way of dealing with things."

Is a dysfunctional political system such a disaster?

Or do 'self-built communities' and 'informal settlements' outside the system promise a more sustainable future?

Torre David, a 45-story office tower in Caracas designed by the distinguished Venezuelan architect Enrique Gómez, was almost complete when it was abandoned following the death of its developer, David Brillembourg, in 1993 and the collapse of the Venezuelan economy in 1994. Today, it is the improvised home of a community of more than 750 families, living in an extra-legal and tenuous occupation that some have called a vertical slum.

Urban-Think Tank, spent a year studying the physical and social organization of this ruin-turned-home. Where some only see a failed development project, U-TT has conceived it as a laboratory for the study of the informal. In their "Torre David / Grand Horizonte" exhibit and in their forthcoming book, Torre David: Informal Vertical Communities, the architects lay out their vision for practical, sustainable interventions in Torre David and similar informal settlements around the world. They argue that the future of urban development lies in collaboration among architects, private enterprise, and the global population of slum-dwellers. This film is a call to arms to architects and everyone--to see in the informal settlements of the world a potential for innovation and experimentation, with the goal of putting design in the service of a more equitable and sustainable future.

This is from an award-winning photographer's reportage earlier this week:

Iwan Baan’s best shot: squatters at the Tower of David in Venezuela

‘About 3,000 people squat in the tower. As well as this gym, there are shops, hairdressers – and even taxis’ 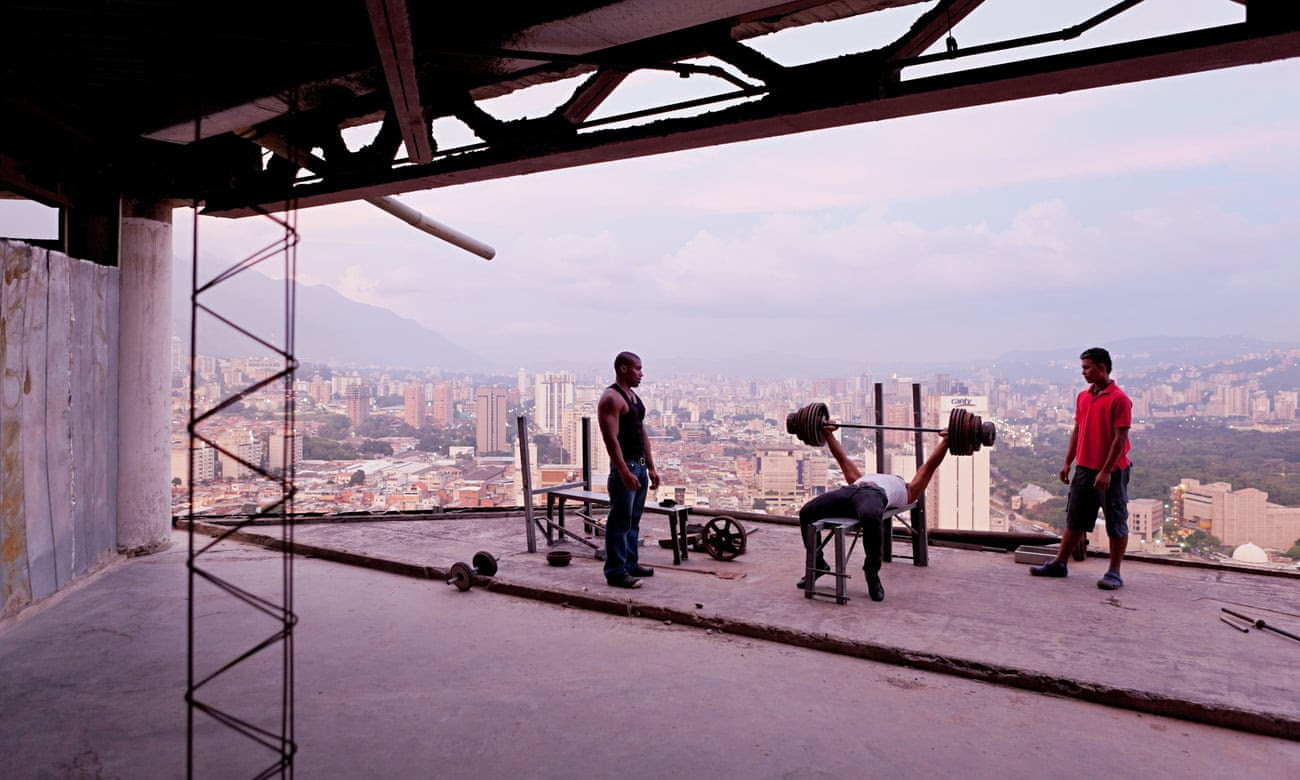 
@jenny_stevens
The 52-storey Tower of David in Caracas was built in 1990, but the developer went bankrupt and it was never finished. It stood in limbo as a concrete shell until about 10 years ago, when people started to move in and build their own homes on its floors. This is the gym on the balcony of the 28th storey. The fitness aficionado who ran it, Gabriel, is standing on the left. He put the whole thing together from scrap materials he found on the site. The weights are cogwheels from elevators that were never installed.
About 3,000 people – roughly 750 families – live in the tower. There is such an immense need for housing in Caracas that any vacant place gets squatted. The political system is so dysfunctional people have to find their own way of dealing with things. Almost 70% of the city’s population live in self-built structures in slums and barrios.
At first, the tower was just a construction site: no elevators, running water or electricity. But over the years, more and more families have moved in, and nowadays it’s more like a village – a self-sustained community in the sky. It has its own economy – every floor has a shop, there are hairdressers, and this gym. Connected to the tower is a car park, also unfinished. Because there are no elevators, people set up taxi services in the car park, which ferry people and goods up and down the ramps between floors. The ingenuity is incredible. These people have absolutely nothing, but they find ways to get by. 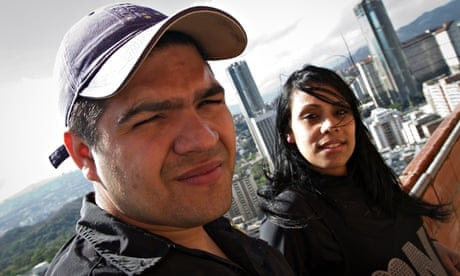 Read more
I went to the tower a number of times over two and a half years. It was difficult to get in – the residents have their own security system and strictly control access. The tower operates entirely outside of the law. Eventually, I got to know some of its inhabitants and they showed me around. They are so proud of what they’ve achieved – they built everything in there by hand.
This photograph is both strange and intriguing. You have the guys working out at sunset with this beautiful backdrop, and then you see all the parts of the structure, the bits of steel sticking out. There’s no handrail, so you feel like you’re floating above the city. These guys are totally at ease in a very unfamiliar situation for us. You might ask: “Is it safe?” From a western viewpoint, with all our health and safety laws, it’s not. But the residents make it work.
Architecture is my big subject. My commissioned work is usually for architects who invite me to shoot their newest buildings. But my fascination is with these self-built communities. In everything I do, though, I’m looking to make it personal. My pictures need to be more than just glossy architectural images. I try to tell a building’s story: what makes it specific for a period, location and climate – from high-end architects like Zaha Hadid to people at the other extreme.
The Tower of David was in the news last year. There were reports that the government was evicting residents and offering them social housing way outside the city. But I was in Caracas four weeks ago. I didn’t manage to get back inside the tower, but from the outside it still looked completely occupied. There had been a lot of protests. I suspect the residents will be there for a long time.
Iwan Baan’s best shot: squatters at the Tower of David in Venezuela | Art and design | The Guardian
.
.
.
Posted by Jeremy Woodward at 14:07