28th January 2003: "EDDC is proposing a coast protection scheme aimed at reducing the rate of cliff erosion at Pennington Point. The scheme would protect the properties located at the top of Salcombe Hill and the Alma Bridge."

Alma Bridge - A solution to the future of the bridge remains undecided...

Alma Bridge, first erected in 1855 to span the mouth of the River Sid is undergoing a major repair to make it safe after recent floods. The bridge was damaged by a fierce and high river after torrential rainfall forced water through the towns flood defenses. Unfortunately the bridge is the last stand where the water escapes into the sea.

The Bridge has changed appearances over the years and you can see this in the photos below. The first bridge was constructed in 1855 at a cost of £26 10s and was doe so using the timbers of the stricken vessel, Laurel. In 1900 R.W. Sampson was commissioned to design a new bridge that can be seen today and as of the storms of 2012 we hope that the bridge can be repaired and reinstated to it's former glory.

Money for the bridge has been promised for some time:
Roads could be abandoned amid huge flood repair bills | Exeter Express and Echo

This Devon County Council document is from 2003:

The recommendation of the County Environment Director, as updated at the Committee meeting of 12 March 2003 remains that East Devon District Council be advised that the County Council: as Local Highway Authority:

> considers in terms of Alma Bridge that the maintenance of the footbridge across the River Sid in proximity of its mouth should remain a priority, not only because of its use by the South West Coast Path but also the important pedestrian link it provides between residential property east of the river and the Sidmouth Town Centre. However, the protection of Alma Bridge should not be regarded as overriding the unacceptable environmental impacts of proposed coastal protection works.

EDDC is proposing a coast protection scheme aimed at reducing the rate of cliff erosion at Pennington Point, the current rate of which is 1.2 to 1.7 metres per year. The scheme would protect the properties located at the top of Salcombe Hill and the Alma Bridge - the footbridge spanning the mouth of the River Sid.

Four options have been examined by the District Council's consultant engineers to address this problem:

The selection criteria for the scheme was based on the ability to protect the coastline and economic viability. EDDC has confirmed that the preferred option is Option IV due to its ability to protect Salcombe Hill, Alma Bridge and the properties along Cliff Road. It also fulfils the economic and technical criteria. The option to ‘do nothing’ was also investigated but discounted by the District Council because of the potential loss of Alma Bridge, River Sid wall, the Ham Sewage Pumping Station and the properties along Cliff Road over a 30-40 year period.

In other words, the parties - including the County Council, the District Council and English Nature/Natural England - have been well aware of the issues for some time now.

There has been considerable debate in the media over the last week on Alma Bridge:
Futures Forum: Streetlife debates the election issues for Sidmouth

This letter appeared in last week's Herald, from a member of the Beach Management steering group:

Stuart Hughes's letter about the Alma Bridge replacement prompted me to reflect on some facts about his record whilst a County, District and Town Councillor. I have lived in Sidmouth for fifteen years and for much of that time have heard promises from Stuart Hughes about an overall transport plan for Sidmouth, which would set out a strategy for tackling traffic issues, park and ride and also in-town parking provision. This study has yet to materialise despite volunteers offering to help, but when an election looms it is generally promised again.

Similarly, the deteriorating Alma Bridge and the massive erosion at Pennington Point have been problems for many years.

It took Stuart Hughes and other Sidmouth District Councillors two to three years to even start the project to develop a beach management plan and it is now running more than a year late. This project is just to put a plan in place so that the EDDC can then apply for money to carry out the beach management. At this rate of progress, the centre of Sidmouth will be somewhere near the Radway Cinema and the sea will be lapping at Winchesters and Ganesha's before any beach management is started!

On Stuart Hughes’s webpage of reports at http://www.devonconservative.org.uk/hughesreport.htm there is an entry from 2 March 2013 (over two years ago) about the fact that his bridge engineers have come up with a design for a replacement bridge. He states that the bridge is dependent on EDDC putting in place rock protection for Pennington Point. The cost of the bridge replacement is quoted as £250,000. This promise was made over two years ago and it is still being trotted out by Stuart now that District Council elections are due. At a recent meeting of the Beach Management Steering Group (of which I am a member) his bridge designer presented the two year old plans to us but finished his presentation with the statement that all the money set aside for the Alma Bridge had now all been spent elsewhere in Devon.

I personally view Stuart’s promises of action with a good deal of scepticism. I think it is time that we had a new District Councillor with a fresh view of the problem and fresh energy and commitment to her local community and their needs.

In which case, the following front page story from this week's Herald comes as a surprise: 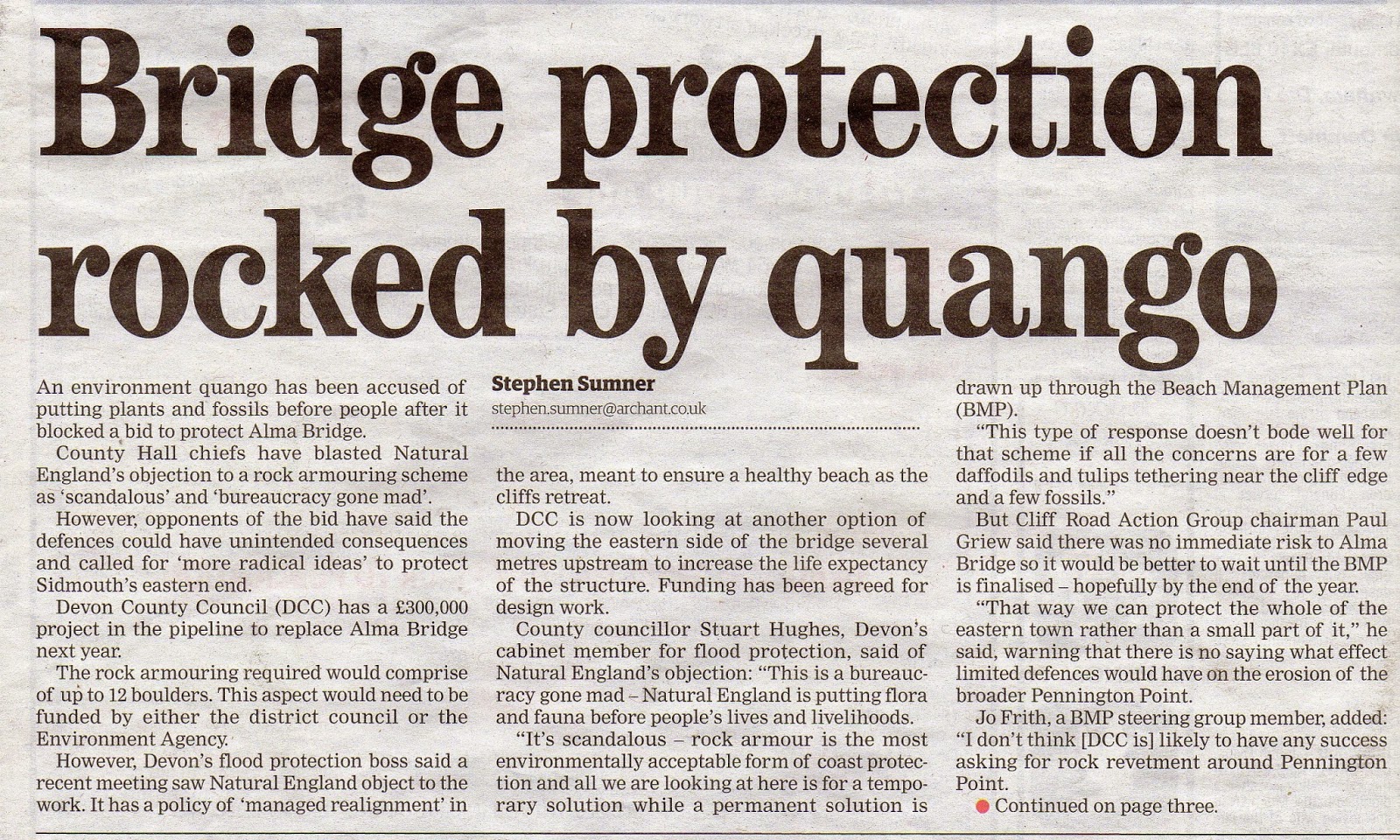 The final section of the story highlights an innovative solution for both Alma Bridge and the cliffs:
Futures Forum: The future of tidal power >>> Pennington Reef >>> a proposal for protection from coastal flooding for Sidmouth
.
.
.
Posted by Jeremy Woodward at 02:35