Climate change: can you officially 'ban' the term?

It is clear that energy and climate change policy are very hot topics in the United States:
Futures Forum: "Abundant, cheap electricity has been the greatest source of human liberation in the 20th century."
Futures Forum: Climate change: and the coal mining industry

It's so hot, that it seems that certain words have become taboo:

Florida scientists know climate change is a major threat. But it's unclear whether they can do anything about it 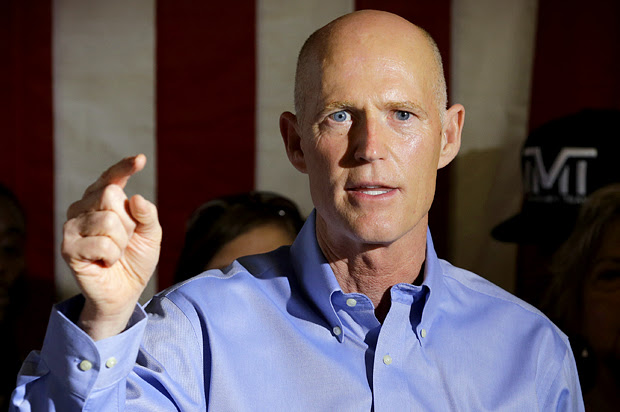 Rick Scott has never made a secret of his distaste for talk of climate change. But the full extent of his willful denial was revealed earlier this week, when former employees of the Florida Department of Environmental Protection accused the governor of banning the terms “climate change” and “global warming.” While the waves of Twitter ridicule have come and mostly gone — how does Scott have the audacity to think he can wish a planet-size problem away? — the wide-ranging, terrifying implications of his alleged policy are still continuing to emerge.

Since the Florida Center for Investigative Reporting first published its exposé of the state’s unwritten policy, even more whistle-blowers have come forward, alleging that the ban extends beyond the DEP to the Departments of Health and Transportation. Some saythey were told flat-out never to use the words in official communications; others that they were forced to delete them from their scientific research articles.

The extreme, Orwellian nature of the ban certainly struck a nerve. It’s rare, after all, to see climate denial take such a literal form. The news also reveals just how thoroughly Florida’s leader has rejected science — and how far the state is falling behind in preparing for the threats already lapping at its shores.

Scott, for his part, denied that a ban exists — an assertion belied by a reported “steep decline” in the terms’ use in DEP documents since he took office. But in the course of defending himself, the governor made clear that even if his officials aren’t forbidden from speaking the words themselves, his administration is nonetheless hell-bent on avoiding the issue. As in the past, Scott repeatedly dodged questions about whether he accepts the scientific consensus on man-made climate change, refusing to say whether he sees it as a threat and, most pertinently, whether the DEP is in any way preparing for it.

This was given the Jon Stewart treatment:

Daily Show host Jon Stewart piled on to the wave of ridicule on Wednesday against the alleged ban on Florida officials using the phrases “global warming” or “climate change.”

Stewart showed footage of the meeting last week that saw state director of emergency management Bryan Koon strain to avoid using the terms after being egged on by state Sen. Jeff Clemens (D), sending Clemens’ colleagues into fits of laughter.

“Wait, wait, don’t laugh,” Stewart said after seeing one senator nearly fall out of his seat. “I think that one guy needs the Heimlich. He’s our first climate change casualty.”

Gov. Rick Scott (R) has denied ordering officials to avoid the phrase, but former state officials have come forward saying they had been forced to use euphemisms like “nuisance flooding” to describe the rising sea level around the state.

While Florida is “too wet,” Stewart observed, California was experiencing the opposite problem: a rapidly-declining water supply.

Not only have residents been asked to cut down on watering their plants, he said, but “celebrities wishing to raise ALS awareness will be forced to take the ‘Sand Bucket Challenge.’”

But when Stewart pointed out that state officials had not taken any action to cut down on agriculture or meat-related water use — which constitute the vast majority of the state’s water consumption — he was shouted down by an angry almond and hamburger.

“I got guys on the inside — your insides,” the burger said. “I’m talking about your colon. One word from me and you don’t sh*t for a f*ckin’ week.”

“Oh, I will impact you like a f*cking cement beef balloon,” the burger replied.

“I actually ordered that once at Arby’s,” Stewart conceded.

Watch Stewart’s commentary, as posted online on Wednesday, below.

Here's some of the science:
Southeast | National Climate Assessment

Here's a report on the effect on marine life from the International Business Times:
Climate Change To Affect Florida Coral Reefs Sooner Than Thought; Bleaching Outbreaks Could Be Widespread By 2030

... which means that the business community is concerned:

Florida is likely to be among the states hit hardest by the impacts of climate change, with sea level rise likely to destroy billions of dollars' worth of coastal property. Under a "business as usual" scenario—in which business and political leaders maintain the status quo of carbon emissions—extreme heat resulting from climate change is also likely to drive up electricity costs and take a heavy toll on workers and vulnerable communities.

These risks were recently detailed in a report commissioned by the Risky Business Project, a non-partisan, independent initiative that highlights the risks faced by the U.S. economy due to unmitigated climate change.

And here's a view from The Nation:
Conservatives Have a Plan for Climate Change: Pretend It Doesn't Exist | The Nation
.
.
.
Posted by Jeremy Woodward at 15:58