The aesthetics of development: pylons and windfarms

A piece exactly a year ago compared the 'ugliness' of a conventional power station with that of a large-scale wind farm:
Futures Forum: The aesthetics of development: power plants and windfarms
Futures Forum: "In praise of wind turbines": man-made landscapes

The problem being, that if you want electric power, it needs to be produced somehow
- and somewhere:
Futures Forum: Slavoj Žižek: on there being "no metaphysical 'beyond' to put our waste" ..... on "the crisis of late capitalism" ..... and on "the comforting mythology of the recycling industry."

The new electricity pylon is upon us:

The first of the UK’s new T-shaped electricity pylons has been unveiled at a test centre in Nottinghamshire.
“We developed the new style of pylon so that we could have a 21st century design to offer as we plan new transmission routes,” said David Wright, director of electricity transmission asset management at National Grid. “The T-pylon is not a replacement for the steel lattice pylon but it’s a new option and in some landscapes its shorter height and sleeker appearance can offer real advantages”.
At 35m high, each T-pylon is up to one third lower than the conventional steel lattice design.
National Grid unveils first 'T-pylon' built in UK | News | The Engineer

This is from the Daily Mail:

Our new, slim power pylons... complete with earrings!: First new design in 90 years is smaller and will help transfer green energy
> National Grid has revealed the UK's first new pylon for nearly 90 years
> Called the T-pylon it is a third shorter than the old lattice pylons
> But it is able to carry just as much power - 400,000 volts
> It is designed to be less obtrusive and will be used for clean energy
By JONATHAN O'CALLAGHAN 9 April 2015
It has been almost 90 years since the electricity pylon as we know it was introduced into the UK. Thousands of the 165ft towers line the land, spoiling scenes of beauty with a cat’s cradle of high-voltage cables.
But their days are numbered after a more elegant design was seen in action for the first time yesterday – complete with a pair of distinctive ‘earrings’.
First new pylon design in 90 years is smaller and will help transfer green energy | Daily Mail Online

Earlier this year, the Mail warned against the march of the older type of pylon:

An ugly army of 400,000-volt pylons is set to march across some of Britain’s most beautiful landscapes. They are necessary to plug energy from wind turbines, new nuclear power stations and even the Continent into the National Grid.


The desecration of Britain: This stunning Lake District view is set to be lost for ever - blighted by monstrous new 'super-pylons' soon to scar 300 miles of countryside... all to hook us up to green energy and a new wave of wind farms | Daily Mail Online

Interestingly, the link is made between wind power and pylons
Wind farm pylons: steel giants of the glens - Telegraph

- as if the one leads to the other, but this is not necessarily the case:

Wind Power and Pylons: Adding Facts to an Emotional Debate
May 1, 2014
Is it possible to develop wind power without pylons?
Yes. Wind power is not directly connected to overhead pylons. Denmark has the world’s largest percentage of wind power and the plan in Denmark is to underground its electricity grid using cables.
Denmark is planning to underground 75% of its electricity grid in the future, see page 16 of thisreport and look under the headings “track” in table 5.1.1., while the other aim in Denmark is to have 50% wind power for electricity production by 2020. To put this in context, the aim in Ireland is to have 40% wind power in 2020. This means that under existing plans, Denmark will have more wind power with underground cables in 2020, than Ireland will have with overhead pylons.

When comparing pylon and turbine, it does depend on how large the turbine is: 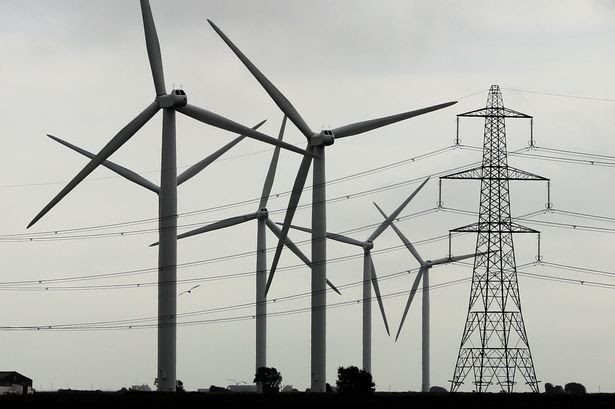 Wife of legendary horse trainer Aidan O'Brien: "We have to stop the pylons and wind turbines before it's too late." - Irish Mirror Online

Perhaps these structures need not be quite so massive: 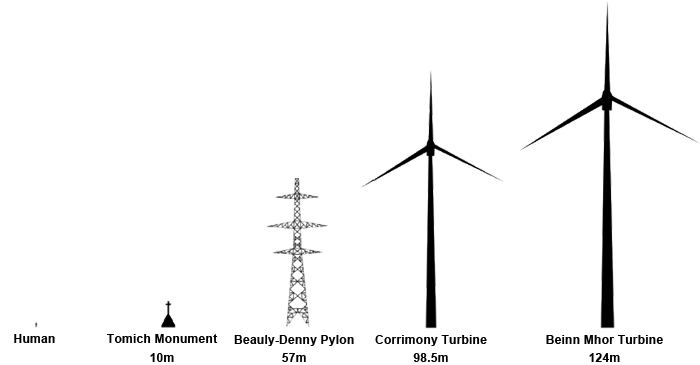 A solution might be to produce electricity on a smaller-scale - which would mean fewer pylons and less massive-scale development of power production:
Futures Forum: Small-scale, locally-controlled power generation
Futures Forum: "In most other countries, renewable energy projects are owned by local communities: and so there's a huge groundswell of support for them."
.
.
.
Posted by Jeremy Woodward at 02:00