The history of the fishing community in Sidmouth has been  famously celebrated:


Stephen Reynolds (1881-1919) was an English writer probably best-known, around Devon at least, for his association with Sidmouth. His 1908A Poor Man's House (Project Gutenberg #26126) is a strongly political (the ODNB describes it as "Orwellian") and sympathetic picture of working life among poor Sidmouth fisherfolk, based on Reynold's life from 1907 onward living and working with the Woolley family in Sidmouth (fictionalized in the book as the Widgers of Seacombe). This background has given him somewhat a reputation as a anti-establishment dilettante who 'went native'; in fact this background brought him to significant official status:


He thus familiarized himself with fishing and the fisherman's point of view so far as to become a recognised authority on the subject and a medium of communication between fishermen and the government. He was a member of the committee of inquiry into Devon and Cornwall fisheries (1912), and of the departmental committee on inshore fisheries (1913), and in that year he was appointed adviser on inshore fisheries to the Development Commission. In 1914 he became also resident inspector of fisheries for the S.W. area.
- Wikipedia, Stephen Reynolds (writer), retrieved 10 Nov 2014

An important event in Sidmouth that celebrates the past, present and future of inshore fishing in Northern Europe.
Inshore fishing traditions gather in Sidmouth
Sidmouth Sea Fest – 1 & 2 May | Devonshire Magazine

This week's Herald highlighted the launch of a book on Sidmouth's last remaining fishing family: 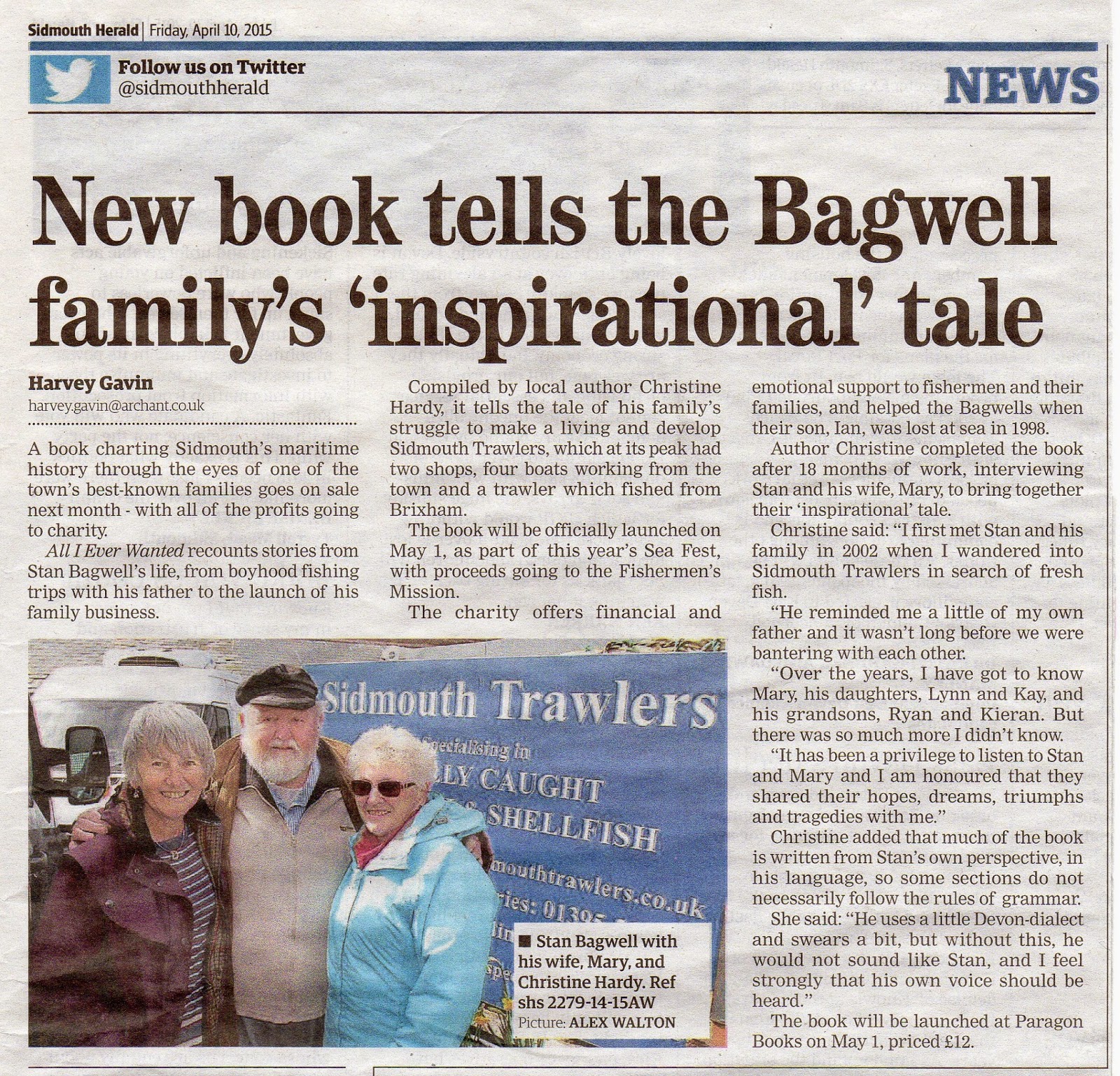 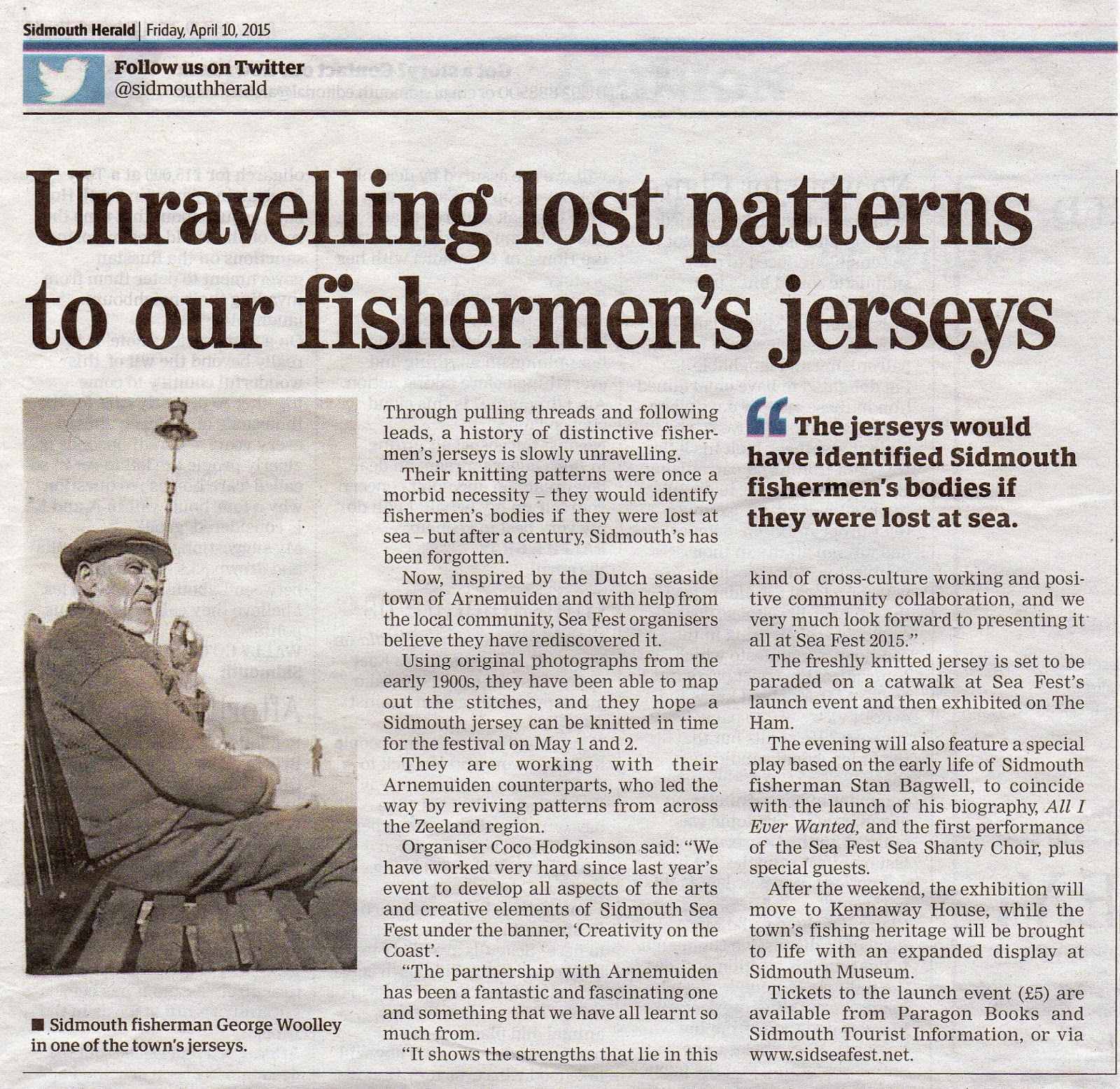 The on-line Herald edition carries more in a fascinating piece on fisherman's sweaters:

Search for sweaters that can help rediscover fishing history

Zeeland fishermen from around 1900
Fishermen in bygone days sported sweaters to identify them if their bodies were washed ashore – a morbid necessity organisers want to pay homage to when Sidmouth Sea Fest returns on May 1 and 2.

Zeeland fishermen from around 1910
Coastal communities in Britain and across northern Europe adopted unique knitting patterns, but many have been lost to the ages.
The Dutch town of Arnemuiden has resurrected the patterns from villages across the Zeeland region and Matt Booth, the brains behind Sidmouth’s festival, is keen to follow suit.
He is appealing for photos to work out the town’s unique stitches.
Matt said: “This is a fascinating project that connects fishing communities across northern Europe, explores the heritage, and compares similarities in practice, hardship, challenges and more that all fishing communities had to face.
“The story lies in the patterns. It lies in the sweaters.”
The Arnemuiden team is convinced Sidmouth will have a pattern of its own, and after two years working in Zeeland, is confident it can reverse-engineer it.
The knitters will need photos from the early 1900s and Matt hopes people will dig into their attics and archives to help.
“It would be brilliant to find the pattern, recreate it, and knit Sidmouth fishermen’s sweaters in time for Sea Fest,” he added.
The results, together with an exhibition of the Arnemuiden sweaters, will be on display at the festival from 7pm on May 1.
It will be followed by a catwalk parade of the sweaters, along with a performance from a specially-formed shanty choir.
The exhibition will remain on the Ham the following day before it moves to a fixed location in Sidmouth for a fortnight.
Matt is also reaching out for 14-to 18-year-olds keen to gain experience as apprentices, volunteers who can help out, and singers for the sea shanty choir to perform at the festival.
The event will celebrate all things in and on the sea with stalls, community activities, live music, demonstrations and fun for all the family.
Anyone with photos or who is interested in getting involved, can email matt@templestreet.net or call 01395 576850.
Search for sweaters that can help rediscover fishing history - News - Sidmouth Herald