Air pollution: "A major and awkward factor behind dirty British air is Britain itself - home grown pollution from our factories and power stations and traffic."

Tourists and locals flocked to spend Easter Monday on the seafront at Sidmouth, Devon Central/Alamy
Will my hay fever flare up because of the good weather? - Telegraph

But today, Sidmouth, like much of the south of the country, has been covered in the swirling mists of air pollution...
Air Pollution: Sidmouth, Devon - The Weather Network

... with dried-out Saharan soil to blame too:
Futures Forum: "Sometimes the parched topsoil of the Sahara settles on London and the whole of England": How the results of intensive farming in Africa are felt thousands of miles away

It's been happening again these last two weeks:
News - Toxic smog smothers the city of lights, cuts Paris traffic in half - The Weather Network

Here's some analysis of the latest bout of pollution:
What is causing the UK's high levels of air pollution? | Environment | The Guardian

And there has been more commentary today
- for example, from the cycling campaign group Sustrans:
Air pollution: we need action, and we need active travel - AirQualityNews

The BBC's Science Editor has also looked at the problem: 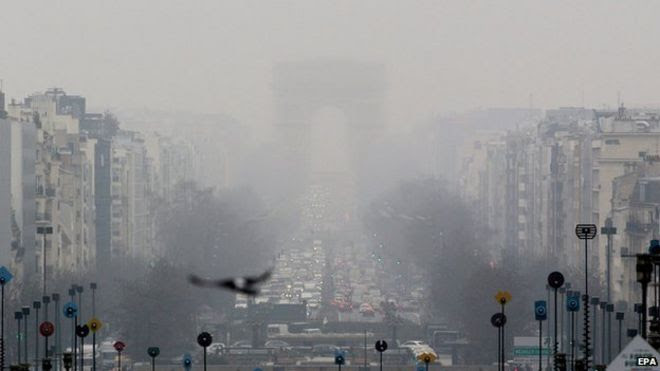 The UK gets some pollution produced in France, and they get some of ours

Warnings about dirty air come so often that only the most severe seem to catch anyone's attention.

The last major episode to grab the headlines came a year ago when many areas of Britain were blanketed in a noxious brew that turned the skies grey-brown for several days.

At the time, all eyes were focused on the most exotic -sounding ingredient - dust that had been blown up from the Sahara. Tiny grains from the desert had indeed made the long airborne trek from the desert but most of the problem was caused by a nasty mix of pollutants created here and abroad.

Britain frequently finds itself on the receiving-end of pollution wafted in from the Continent - and more of that is forecast tomorrow with a current of air circling from central Europe across southern France and over the English Channel.

A computer model from the American weather agency NOAA calculates where the air that will be over London tomorrow has come from. A so-called "back-trajectory" plots the position of a single parcel of air every six hours so you can see its path over the past four days. The chart also shows that the pollution cloud will generally remain below 500m in altitude which means it is concentrated in a relatively small air space and therefore packs more of a punch.

As often happens, this shows that much of the contamination comes from the industrial sites and major cities of northwest Europe.

But farmers in those regions may also be to blame. April often sees them spreading fertiliser on their fields which releases plumes of ammonia that are lofted into the atmosphere and carried on the air currents.

How much of this stuff actually reaches Britain all depends on the precise pattern of the winds - a slight shift in one direction can despatch it all over the ocean, a tweak the other way could see it billowing our way.

But continental pollution is only one part of the story. A major and awkward factor behind dirty British air is Britain itself - home grown pollution from our factories and power stations and traffic. 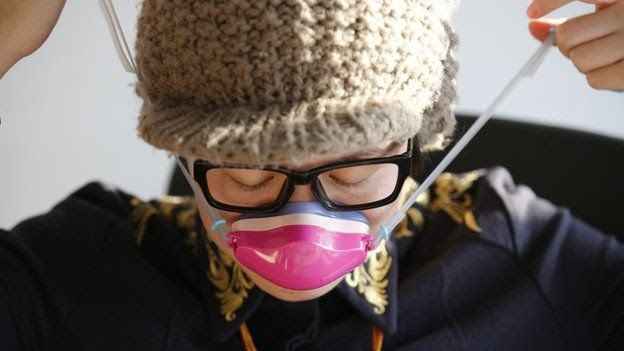 Scientists have an array of instruments to tease out the different sources of pollution - a version of CSI forensics that can pick out where the muck has come from. The tiniest particles are known as PM2.5 - because they're smaller than 2.5 microns across. If these are more than a few days old, they are known as "aged particulates" and were produced across the Channel before being sent our way. If they are identified as sulphates they will have been emitted from industries; nitrates on this scale come from the exhaust fumes of traffic.

Taking a breath of these "aged particulates" means you may well be inhaling a blast of pollution generated when someone accelerated away from traffic lights in northern France. Dirty air knows no boundaries. But the same techniques can nail which pollution has been produced here. "Fresh" or "primary" particulates - only several hours old - serve as a smoking-gun to identify sources in Britain.

And research indicates an ugly truth: that we export more air pollution than we receive. An infamous "London plume" of contaminated air frequently stretches eastwards to northern France. This clearly showed up in instruments deployed by a pollution research plane that I joined during the London Olympics in 2012.

According to Dr Ben Barratt of King's College London, the problem is worst in urban areas and is both chronic and serious. "We can't solve the problem merely by reacting to every episode - we need to change our behaviour every day because it's the long-term exposure that matters for your health."

All this comes as the British government faces another stage in a long legal battle for breaching European Union standards on nitrogen dioxide, one form of air pollution. An environmental campaign group, Client Earth, has brought a series of challenges. Next Thursday, the Supreme Court will hold a hearing on whether the government should be ordered to produce a more radical pollution reduction plan than already outlined. Under current proposals, Britain will meet EU standards by 2030, with the conurbations of London, the West Midlands and North West England forecast to be the last to fall into line.

None of this is remotely on the scale of what Chinese city-dwellers have to put up with. A couple of years ago I saw for myself how grim the situation can be in China and what the authorities are now trying to do.

But nothing attracts attention like your own skies turning a slightly funny colour, and yet again hearing the health warnings to the aged, the asthmatic and the infirm to keep out of harm's way.

The UK is being taken to court over its pollution levels:
European Commission - PRESS RELEASES - Press release - Environment: Commission takes the United Kingdom to Court over power plant emissions