Climate change: Planning for flooding >>> >>> >>> >>> "The UK needs to be more prepared for the impact of wetter winters and more severe weather events."

Following the UN conference on climate change, there were plenty of questions as to exactly how the promises would be implemented:
What does the Paris Agreement mean for planning? | Planning Resource

However, we are not doing enough:

Professor Dame Julia Slingo, chief scientist at the Met Office, said the UK needs to be more prepared for the impact of wetter winters and more severe weather events. "It is likely that in the UK we'll see a broader range of high-impact weather," she said. "We need to be prepared and make wise decisions regarding investment in adaptation. For this we need to make use of the best available science."

The UK is 'largely unprepared' for the effects of climate change, according to the Carbon Trust.

It says only a quarter of public sector organisations in a survey had plans in place to cope with climate change including flooding and higher temperatures.
A further 15% of public sector organisations have undertaken a risk assessment but not made any plans to mitigate identified risks, it claimed.
The survey was carried out among professionals attending the trust's public sector conference in London.
It said seven in ten had put action plans in place to reduce carbon emmissions and use of resources while nine in ten claimed to be taking at least some positive action.
Tim Pryce, head of public sector at the Carbon Trust said: 'This research suggests that public sector organisations are making some progress on mitigating climate change – although not at the rate that scientists tell us is necessary to avoid the worst impacts.
'However, they remain largely unprepared for taking action to reduce the risks of impacts such as flooding on public services, transport and healthcare.'

Here is the full report from the Carbon Trust:
UK Public Sector "largely unprepared" for climate change risks including flooding

Meanwhile, there have been several programmes on the radio looking at how we should be planning for flooding, as climate change gathers pace: 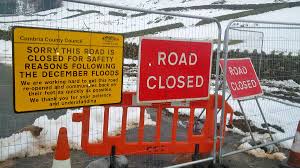 Extreme weather this winter has cut off large areas of Britain from the outside world. Does our Victorian infrastructure need an urgent update?

With parts of Cumbria cut-off since early December, bridges down in Yorkshire, hundreds of ferry cancellations and the West Coast train line out of action until March it's increasingly clear that Britain can't cope with the strong winds and floods that are becoming the new norm.

Should we embark on a new transport revolution, pouring concrete and laying steel to future-proof our roads and railways or should we accept a disconnected Britain?


After the Floods - A Tale of Two Cities 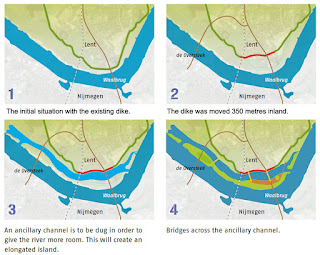 The Dutch city of Nijmegen has much in common with the English city of York. Similar in size, both are much visited by tourists because of their histories and architecture. But both also have rivers running through them and are susceptible to flooding. So how do their defences compare? And, as York and other communities continue to mop up the damage caused by the latest catastrophic flooding, did basic mistakes and a failure of planning make a bad situation very much worse?

BBC Radio 4 - File on 4, After the Floods - A Tale of Two Cities
Nijmegen - STAR-FLOOD
Room for the Waal project reduces flood risk in the Nijmegen area | News item | Government.nl
.
.
.
Posted by Jeremy Woodward at 08:00