Although this 'amicable critique' of the Transition Town movement is now three years old, its different perspective from the European Green Journal is nevertheless still illuminating:

24/01/2013
The Transition Initiative movement is growing rapidly in recent years. It is an innovating and positive contribution to the debate on sustainability, but what are its potential pitfalls? Simon De Muynck discusses. 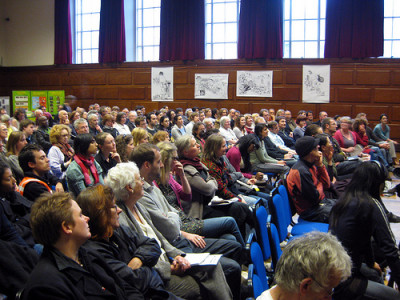 The world is currently facing two major issues, as identified by the scientific community: ‘peak oil’ and climate change.
The former will impact the economic and institutional balance of countries that have based their economies on oil-derived products. The latter will undoubtedly impact the standard of living of the world population as a whole.
In 2006, Rob Hopkins understood this duality and foresaw the stakes involved, and thus started the Transition Initiatives (TI).  The basis of the idea was to initiate a grassroots movement aimed at decreasing society’s ecological footprint (over a range of sectors: energy, agriculture, transport…etc.), as well as to optimise the adaptability of the populations most concerned.
By the end of 2012, the network totals 2,803 initiatives, amongst which 421 are official initiatives and 566 are still on the books (Muller) across 34 Countries, mostly in Europe and the United States.
The enthusiasm that arose is due to a number of factors that ensure the movement’s short-term sustainability. These factors cannot mask the medium- to long-term obstacles/difficulties the projects will face.  This article will highlight the advantages of this movement but also bring to the fore its limitations in a constructive manner.

THE ADVANTAGES OF THE TRANSITIONAL TOWNS MOVEMENT

Substance
First and foremost, Rob Hopkins explains the concepts of peak oil and climate change.  He simplifies precisely and scientifically the imminent nature of these two phenomenon and their potential consequences.  The Transition Handbook sets out a theoretical framework that is supposed to adapt to all contexts.  Rob Hopkins applies concepts that had until now remained the preserve of academic spheres and civil society (territorial indicators, re-localisation, prospective planning).
Form
The Transition movement is a particularly positive and constructive movement, which enables the inclusion of a large spectrum of social actors. It differentiates itself from other radical ecological discourses that, although using comparable foundations, are much more provocative and cynical.
Rob Hopkins advocates a bottom up approach: it is up to the citizenry to propose their ideas for the future of their neighbourhood, city, and even country. Such purported ideas should then travel their way up to the appropriate decision-making level.
The Tools
The Transition Movement uses models from the psychology of social change.  Rob Hopkins compares the current state of a typical western citizen to that of an addict.  Hence, the establishment of discussion groups which enable participants to express their fears with regard to the social change that is unfolding.  He applies a series of collective intelligence techniques to render these meetings more efficient and to give all participants the feeling of being heard.
He also encourages writing Transition Takes, which are synopses in which participants outline a more resilient, less carbon based world, with collective values.  A plan of action to diminish energy consumption is the outcome of the twelve-step program as set out in the Transition Handbook.
The movement has rallied around A Transition Network that has been particularly successful.  This Network grants the official label to each initiative, provides the necessary tools, organises events, conferences, Transition Trainings, defines the objectives, sets up the Transition Forum, publishes the project’s books and manages the Transition Radio.  The ultimate objective is to develop a veritable Transition Culture for the long haul.
So how can we assess and review this movement that has chosen as its main themes the most important stakes of our time (peak oil crisis and climate change)? How do we encourage citizens to reflect and, especially, betting on their shared genius, utilise a specific discourse within their own network, and all of this in such a limited time?
1st Limitation: An Elitist Movement
Gill Seyfang (2009a) analysed the composition of the Norwich Transition Movement and found that the participants were on average more educated than the Eastern Region population.  An impressive 83% of the Norwich Transition Movement had obtained a degree or equivalent or even a post-graduate qualification versus 23% of the population of the Eastern Region.

Furthermore, a study carried out on 33 official TI across the globe has revealed the prototypical TI.  They appear to be more common in small cities with populations of less than 10,000, included a concerned citizenry or elected officials and/or with a history linked to environmental questions.  Totnes, the original birthplace of this movement, with a little under 8,000 inhabitants, embodies the picture perfect sample of this profile.  Indeed the city has a large ‘alternative new age’ community that is deeply involved in a number of sustainability projects and is also home to Shumacker College which runs a post-graduate and Msc course in Holistic Science.In fact, members of Norwich Transition display a post-materialist attitude: working part time, more highly educated than the average, favouring personal growth and activism- in particular environmental- at the expense of professional career advancement and consumption.
2nd Limitation: Deficient Financing
With respect to budgeting, the Transition Initiatives are fragile.  Looking at the 33 initiatives, 58% had requested support in the form of funding, logistical or material support from a local authority, with 40% successfully receiving funding.
The level of funding provided by local authorities is remarkably low (between €250-6, 000 excluding the two most important contributions by the UK and Scottish Governments), thus the level of funding engaged pales in comparison to the stakes at play.
As a compounding element, none of the funding identified in the study is permanent nor structural. It is however clear that a reliable source of funding is a key element in the sustainability and success of such a movement.
3rd Limitation: Underestimating the role of social actors
Rob Hopkins insists on the importance of a ‘bottom up’ approach through local populations, though he is aware that a movement such as this one requires national and international safeguards.  He cites some examples in the Transition Notebook: international protocols on climate change, application of the contraction and convergence principle, a moratorium on bio-carbon production, protection of biodiversity, carbon emissions quotas, and delegation of power to local authorities. (Hopkins 2008)
It is right to question the strategy that change generated at the bottom will spread to communities, business and local, national and international governance. Hopkins responds that “national and international answers are more likely in an environment where there are a number of enthusiastic collectives.”
Future change will have to affect not only practice but also and most importantly politics and its institutions.  Rob Hopkin’s assertion overestimates the capacity for change amoung local citizens, a fortiori, in today’s current political climate.  What is more, Jackson (2005) highlights the importance of governmental support for ecologically friendly behaviour.
The anti-activist attitude (Semal 2010) adopted by the movement and the lack of social actors (Haxeltine et Seyfang, 2009) are causes for concern over the long term, when important political decisions will have to be made: for example, import/export questions, insulation of private homes, public transport, resource and waste management, urban planning…
The level of decision-making and the current dissemination of ideas appear too weak to bring about any notable social change.  Clearly, the bottom-up movement cannot suffice.  Seyfang (2009b) has demonstrated that waste management, energy, transport and regular economic activities are only marginally affected by TI.
4th limitation the Simplified Mechanisms of Behavioral Change
In order to avoid any cognitive dissonance likely to arise between our present oil- dependent lives and the desired social change, Rob Hopkins uses social change psychology from work done on addiction (Transtheoretical change model DiClemente).  He also promotes the creation of expression groups or spaces (FRAMES[2], Motivational Interviewing).  The idea at first appears to be attractive, however research done on consumption and personal motives have found that it is “virtually impossible to derive universal casual models with which to construct behaviour change policies in different domains” (Jackson 2005).
The goods and services used by mankind are ingrained in the cultural structures of our lives.  Through these goods and services mankind is able to satisfy his basic needs and desires, and is able to communicate about his identity and culture.  The habitual character of consumption constitutes a major obstacle to behavioural change, in the same fashion as do (more obviously) social norms and cultural expectations, which they form a part of.
Further, consumption behaviour is strongly influenced by emotional states and can be both altruistic and selfish (Jackson 2005).
Therefore, behavioural change requires a holistic approach that encompasses all the relevant fields (psychological, social, emotional, normative…).  Only applying one model of social change psychology thus appears rather simplistic.  According to Jackson (2005) there is a lack of evidence suggesting that local initiatives can give rise to the necessary collective social change needed to achieve the desired environmental social objectives. “There is simply not enough experience (…) to determine precisely what form such initiatives should take, how they should be supported, what the best relationship between community based social change and Government is (…) or what kinds of resources such initiatives require for success”. (Jackson, 2005)
5th Limitation: Limited Prospects?
Rob Hopkins emphasises the importance of the exercise requiring citizens to outline the future characteristics of a decarbonised, re-localised, convivial and resilient.  The objective is to help visualise an ideal future through new myths, stories and possibilities.
This all inclusive, positive proposition–every citizen is invited to take part in– differentiates itself from other more ecologically militant positions and the more radical “no-growth” movement.
If these exercises do allow the Transition Movement to visualise the future, they do only that and lack any operational element.  The Energy Descent Action Plans are supposed to be more strategic and operational; however amongst the 2,803 TI in the network, very few have actually put their plan to action. Dissemination of the Transition ideals in the political realm is still deficient.
What is the real transformational value of these projects?

Despite this amicable critique, the Transition Movement is an experimental albeit promising initiative given modern day issues.  The Movement will have to overcome these contradictions and weaknesses to ensure longevity.
Suggestions: