Back before the property crash in 2008, Greenpeace upset property developers in Spain by showing the potential impact of climate change: 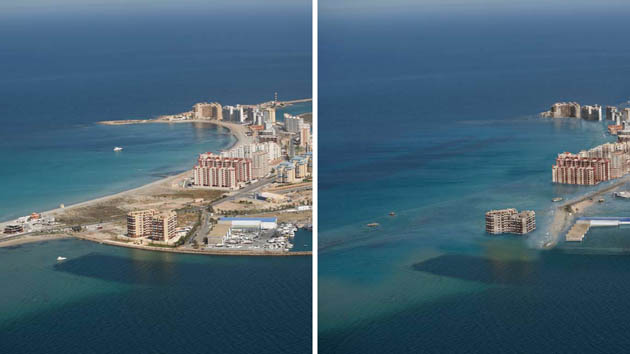 Meanwhile, in this part of the world, there have been serious disagreements over the 'redevelopment' of Exmouth's seafront:
Futures Forum: Regenerating Exmouth seafront: "It is good that people air their opinions" >>> 90% reject District Council's plans

There has been one particularly acrimonious court case:
Gag lifted on £18m Exmouth seafront project after court battle with Fun Park owners | Exeter Express and Echo

However, the weather suggests that this might not be the best place for redevelopment:


Exmouth’s Queens Drive closed due to strong winds and sand 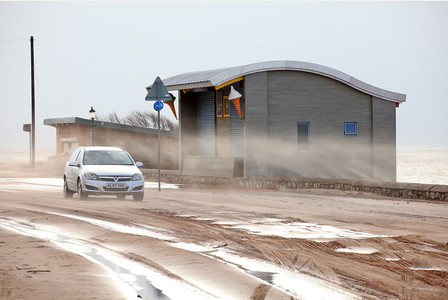 A Tweet by East Devon District Council's Streetscene read: "Sahara comes to Exmouth...Queens Drive is impassable and the road is closed. Pls don't try it!"

Or, if you prefer the video:


Video shows the streets of Exmouth, Devon, on Tuesday night, hit by severe flooding as heavy wind and rain continues to cause disruption. Thousands of homes in the south-west remain without power as the Environment Agency warns those in the area to stay away from the coast. It has issued six severe flood warnings, meaning a danger to life

The authorities have indeed prepared for rising sea levels:

Here is a wider view of the dangers of flooding for the South West due to climate change - with particular emphasis on Exmouth:

Rising sea levels – how will you be affected? Here’s our guide:

Newton Abbot Racecourse could disappear under water, and Westcountry trains would be cut off if apocalyptic new climate forecasts are correct.

Scientists working in Antarctica warn that the loss of ice caused by a warming ocean could raise global sea levels by an astonishing three metres.

They have been carrying out fieldwork in the region to assess the landscape and determine how the West Antarctic ice sheet might respond to increasing global temperatures.

They described the latest findings as "troubling" and said it was possible the ice sheet has "passed the point of no return".

The study – said to be the first of its kind – was carried out by scientists at the University of Edinburgh, Northumbria University and the Scottish Universities Environmental Research Centre.

They were able to gauge how levels of ice covering the land have changed over hundreds of thousands of years by studying peaks protruding through ice in the Ellsworth Mountains on the Atlantic flank of Antarctica.

And they warned that the ice sheet could disappear relatively quickly.

And German researchers have also said sea levels are rising much faster than feared, driven by melting ice caps and expansion due to seawater warming.

The team of researchers at the University of Bonn have used satellite data to show that the expansion was almost twice as large over the past 12 years as previously assumed.

How will you be affected?

A website, flood.firetree.net, has mapped the impact of rising sea levels.

Here were take a look at what features in the Westcountry could disappear under rising waters.

Exmouth Rugby Club, Royal Avenue and the roads around Hartop and Church Roads, would be flooded. Most of the railway line to Exeter would be affected, from Exmouth station as far north as Topsham.

At Exminster, low-lying land around Station Road would be submerged.

Oak Meadow Golf Club, on the western shores of the Exe, would become mostly a water hazard.

Floodwaters would push past the M5 to lap at the doors of Exeter itself.

The main railway line would be inundated from Powderham Castle to the Matford Marsh.

Rising sea levels – how will you be affected? Here’s our guide: | Plymouth Herald
Will your home be flooded by rising sea levels? | Western Morning News
.
.
.
Posted by Jeremy Woodward at 15:05