From Sustainable Development to Degrowth: strategic concepts in a time of downturn

A series of recent articles from the European Green Journal considered this in the context of climate change:
Futures Forum: Climate Change: Focus COP 21

Here is the article which looks specifically at what we mean by 'sustainable development':

It is vital now to distinguish between the terms “sustainable development” and “degrowth”, as while one has lost meaning, another is more relevant than ever. Written before the start of COP21, this piece sets apart the two and highlights the importance of changing our view of what constitutes a healthy, climate-friendly economy.
02/12/2015
Jakub Rok 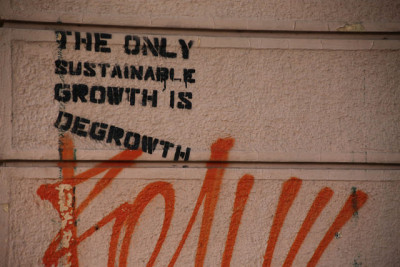 This article was originally published by Zielone Wiadomości as part of a special edition for COP 21.
When, in 1992, the first Earth Summit in Rio de Janeiro (also known as The United Nations Conference on Environment and Development) took place, I was a 5-year-old boy enjoying a carefree life. Only five years earlier the famous Brundtland Report was released, a document which coined the term  sustainable development and introduced it to the public discourse. As I imagine, the 172 delegates who attended the first Rio summit, as well as world public opinion, were full of hope at that time. For the first time in world history, it became clear that we not only should put an end to the exploitation of natural resources, but that we also need to come up with a holistic alternative plan. There must have already been a multitude of disparate visions of the future, but they were all united by some sort of belief in a better tomorrow, in the possibility of taking a big step forward. Many years later, one Polish environmental activist would reveal to me the details of a crazy idea devised by his group. According to their plan, Poland—which was a country on the edge of a tremendous transformation at the time—was to become a ‘living lab’ for sustainable development, a place where activists from the whole world would meet to turn theory into practice. Unfeasible as those plans seemed, the promise of change was real.
So where have we come two decades since then? Again, we find ourselves preparing for another important event—the 2015 Climate Conference in Paris. Just like in 1992, delegates from different parts of the world will gather around a conference room table to address some important environmental issues; their debates will certainly attract some activists and will grab the attention of world opinion. However, the question arises whether we still have this hopeful feeling of standing at the threshold of a better reality. Do we still believe that in the future we will see the emergence of a new inspiring vision of humanity? After all, the Paris conference will be held against the background of a global threat increasingly difficult to contain—climate change. With the extinction of many species and the widespread collapse of entire ecosystems, on the one hand, and with wars, large-scale migrations and an increasingly fiercer competition for natural resources, on the other hand, global warming to date has had disastrous effects both on wildlife and humans. It is no wonder, then, that the upcoming conference in Paris is accompanied by a feeling of frustration. We still have a vivid recollection of some of the similar conferences in the past; their futility and the short-sightedness and hypocrisy of their participants, especially those from Poland, who have been endlessly and hopelessly committed to protecting fossil fuels while at the same time blindly insisting there is no other alternative.

We now live in a world where all those lofty exhortations on the need for sustainable development have lost their force, despite the fact that the term itself has enjoyed wide currency in public discourse. What holds strong instead is an unswerving belief in the liberating role of economic growth, a term which, for the European Union, has become synonymous with sustainable growth. As citizens of the Global North, we are unable to admit that ‘we’ve accumulated enough wealth.’ Even worse, neither are our so-called elites, who are invariably preoccupied with entrapping us in a whirl of excessive consumerism.One promising response to this impasse is degrowth (décroissance in French, postwzrost in Polish), an emerging political and social movement which questions the need for further growth and which challenges the necessity of our complete reliance on it. The primary function of degrowth is thus to shake the foundations of an assumption so obvious and widespread that it has been taken for granted. Hence the name itself (degrowth), which might serve as a potent and thought-provoking slogan to critique and undermine the dogmas of economic neoliberalism, for the sake of creating a gap in the status quo narrative, a gap which could be filled with new content.

Another essential component of degrowth is an interdisciplinary tale about the pains of a world infatuated by the idea of constant growth. It would be nigh impossible to summarize this tale here, so I will try to list some of its underlying premises by considering them under four headings. Firstly, it has not always been this way. The idea that our world is entirely dependent on economic growth was, in fact, just a short episode in world history, one of the developments precipitated by the Industrial Revolution in the 19th century. Moreover, the tendency to endow us with the attributes of homo oeconomicusis a product (or, to a certain degree, a fantasy) of the era of growth, rather than its cause. Secondly, the idea of growth itself is not an effective treatment strategy. The insistence on boosting GDPs entails the systematic commodification of subsequent life domains, which in turn proves harmful to the environment and human relations. In fact, only at early stages of economic growth the GDP has a strong correlation with the trend in living conditions over time, though it still does not guarantee the fair distribution of wealth and has little effect on our overall well-being. Thirdly, we cannot continue to live this way. Unhalted economic growth on a planet which is running out of its natural resources is simply unfeasible. Any reports about countries which have succeeded in separating growth from resource use tend to ignore the fact that much of the production sector has found a new home in Asia. Similarly, increased effectiveness in using resources also will not help as long as all savings gained from innovation implementation become automatically earmarked for increasing consumption. Finally, a different world is indeed possible. Its foundations have already been laid down by many thriving and emerging social movements all over the world. Significantly, however, all these scattered grassroots initiatives need to be bound together by a common story and a shared purpose, which would, in turn, enable the creation of a congenial environment for debates on a vision of the future.
Arguably, it is the theory behind degrowth that could facilitate that integration by providing conceptual frames; that is, an ideological umbrella to consolidate all diverse alternative groups and intentional communities. Different social projects, including grass-roots food initiatives, time-banking and permaculture farms, represent a third key component of degrowth. Indeed, this peculiar alliance of peripheral movements may actually foreshadow the twilight of the centre. Following the outbreak of a sequence of crises which wreaked havoc on the existing system, the question of finding alternative solutions becomes even more urgent. The role of degrowth is to come up with such solutions in advance and to effectively propagate them worldwide. Importantly, these solutions should be aimed at the root causes of the crisis, should be based on the principles of social justice and democracy, and should be supported by the existing social and local movements. We need all of this, unless we want to wake up in 20 years’ time only to realize that our lofty exhortations still remain unheard by political decision makers. Undoubtedly, degrowth rekindles belief in our own agency. It encourages us take more responsibility for the future, instead of entrusting it to those unable to go beyond the carefreeness of today.
From Sustainable Development to Degrowth: Strategic Concepts in a Time of Downturn - Green European Journal