The creative destruction of innovative technologies will be hitting Exeter over the next decade:
Futures Forum: Exeter emerges as the UK city expected to lose the most jobs to automation and the rise of new technologies

There are several proposed ways out of the dilemmas which will be thrown up...

One is the 'sharing economy' - although it depends what you mean by 'sharing':
Futures Forum: The sharing economy >>> “This on-demand, or so-called gig, economy is creating exciting economies and unleashing innovation. But it is also raising hard questions about workplace protections and what a good job will look like in the future.

Another is the 'commons' - and a thing called 'zero marginal cost' which reduces profits to... nothing:
Futures Forum: Jeremy Rifkin and the Collaborative Commons

And another is 'postcapitalism' based on the new 'information economy':
Futures Forum: Transitioning to an economy based on sharing information

The current ideas of Jeremy Rifkin and particularly Paul Mason are given short shrift in a piece from the Baffler which questions this 'info-liberation':

Power to the Pixels 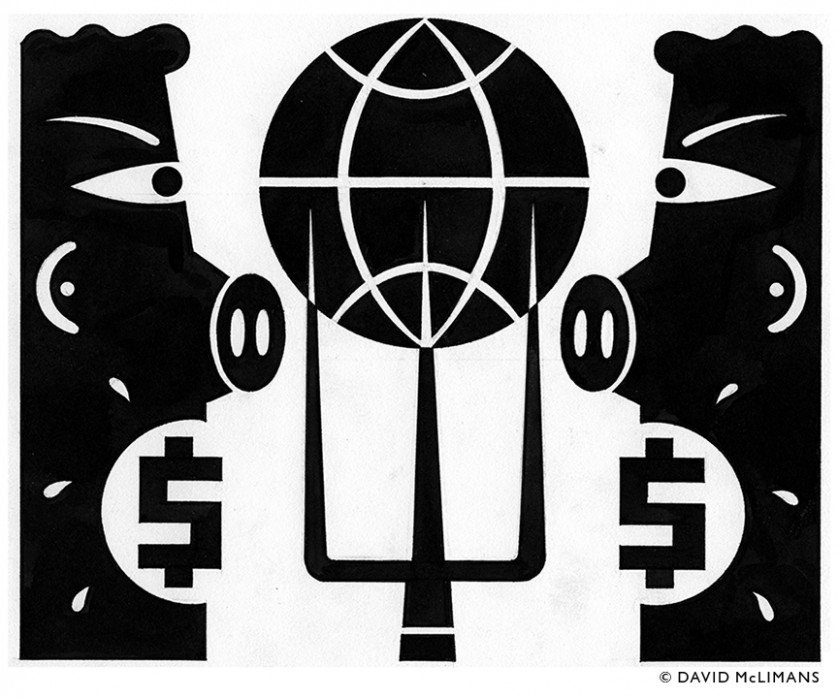 It sure was a short “end of history.” Back in 1992, with the Berlin Wall leveled and Russia abruptly abdicating its self-appointed role as bureaucratic overseer of the historical dialectic, Francis Fukuyama and his neoconservative confreres surveyed the reconfigured world order and saw that it was good. Free markets would rule, and liberal democracy would cover the globe, lifting humanity into an agreeable state of material well-being.
Now, with a quarter century’s worth of hindsight, we know that history wasn’t about to sit still for its embalming. The 2008 economic meltdown delivered but one among many rude countervailing verdicts; we’re also living with resurgent economic, ethnic, and religious nationalisms, looming climate catastrophe, and unpredictable new populist and anti-austerity movements, here and abroad.
Yet here we are, and for left-leaning thinkers with a weakness for grand theory, the present moment is ripe with its own dialectical promise. In Postcapitalism: A Guide to Our Future, Paul Mason, the economics editor for Britain’s Channel 4 News, seeks to stand Fukuyama on his head. In pronouncing the triumph of liberal market capitalism, Fukuyama was following a bastardized version of Hegel’s philosophy of history; Mason, for his part, has countered with a bastardized account of the Marxist historical dialectic. A heterodox British socialist, Mason believes that an egalitarian political economy is the natural outcome of the all-conquering information age. All prior modes of production, distribution, and political conflict will be eclipsed. It’s the socialist version of Ray Kurzweil’s singularity—and alas, it is no more convincing than the fond reverie that the anointed leaders of the Silicon Valley elite will eventually conquer the rude indignities of aging, mental slowdown, and death.
...
Following the lead of fellow wigged-out social prophet Jeremy Rifkin, Mason dubs this the “zero marginal cost effect”—a process in which freely copied and circulated information basically crowds out all other economic inputs, and leaves the digitally empowered new human being unshackled from all prior forms of economic convention and exploitation. Like Fukuyama’s “last man” at the end of history, Mason’s new historical agent has the world open up invitingly before her. But while the last man of the nineties had to suffer the painful dislocations of ideological, social, and political collapse, this new millennial avatar of the zeitgeist only has to spend a lot of time online. Point, click, and sit back for the revolution.
Sure, capitalism’s legacy masters might still create new price cartels, monopoly protocols, and the like to try to reverse the remorseless downward pressure that information exerts on prices—but such desperate measures really just underscore their perverse failure to grasp the radical implications of the revolution that they themselves have unleashed. “Information is not some random technology that just came along and can be left behind like the steam engine,” writes Mason. “It invests all future innovation with the zero-price dynamic: biotech, space travel, brain reconfiguration or nanotechnology, and things we cannot even imagine.”

Like Francis Fukuyama’s “last man” at the end of history, Paul Mason’s new historical agent has the world open up invitingly before her.

Caught in the relentless downward drive of the price mechanism toward zero, capitalism has only a few paths forward, none of them plausible. It could continue to spin off new markets and pricier technologies to service them—but here again, the logic of the zero marginal cost effect would just kick in with redoubled force. It could seek to extract greater margins from property rights, following the strategies of the record industry in the face of the mp3 revolution—but we all know how that turned out. Or, faced with plummeting labor demand (and the teetering regime of what Bafflerite David Graeber has memorably dubbed “bullshit jobs”), it could transform more routine nonmarket interactions into fee-based commercial concerns—but that wouldn’t begin to make up for the revenues and jobs lost to the frictionless flow of information. “You could pay wages for housework, turn all sexual relationships into paid work, mums with toddlers in the park could charge each other a penny each time they took turns to push the swings,” Mason writes. “But it would be an economy in revolt against technological progress.”
And that progress adds up, in the big picture, to one simple axiom: “An economy based on information, with its tendency to zero-cost products and weak property rights, cannot be a capitalist economy.” (The italics are Mason’s.) It’s a nifty formulation for a faux-economic law, particularly since it permits Mason to sidestep the all-too palpable tendency of the information economy to promote big-data monopolies that systematically drive prices up and wages down, whether via the notorious “surge pricing” of Uber and other rentier-style service cartels, or through the push to replace assembly-line workers with robots––which is particularly aggressive, as it happens, at the Foxconn factories in China that do contract work for Silicon Valley leviathans. In reality, the information economy is poised to drive the wage component of production toward zero, even as it enlists the price mechanism into the service of the techno-oligarchy’s plutocratic whim of the moment.
...

We don’t like to linger on the thought that there’s precious little daylight between the enforcers of authoritarian factory discipline in the unfree East and the liberty-defending wizards of American private equity.

Of course, information isn’t an undifferentiated liberationist good. It doesn’t create any economic systems or behaviors—let alone social justice—organically or spontaneously. Like any other sphere of our common life, it’s prey to ideological distortions, hackery, and operational blindspots. To take just one strikingly relevant example, recall the covertly recorded speech that Mitt Romney delivered to GOP donors in Boca Raton, Florida, during the 2012 presidential campaign. Now, here was something that had all the earmarks of a digital media intervention right out of the Paul Mason playbook: A temp catering employee heard Romney holding forth on matters of wealth inequality, and took to his camera to capture the proceedings on video, later posting the damning clip on YouTube and a number of liberal blogs. The GOP nominee spouted his nonsensical line about 47 percent of Americans being on the government dole, mere automatons programmed to support the redistributionist agenda of President Obama and the Democrats. As the story burst into the cable news cycle, an abashed Romney tried to cough out a series of unconvincing apologies for his remarks, and there the narrative stood—as one of the major turning points in what had been, until then, a hard-fought battle between the major party candidates.
But here’s the thing: Scott Prouty, the catering worker who filmed Romney’s talk, wasn’t focused at all on the infamous 47 percent quote. Instead, what caught Prouty’s outraged attention was an anecdote Romney related about a visit to China during his private equity days. Romney took a tour of a Chinese mega-factory, where workers were quartered in cramped dormitories. One of his guides pointed out that the workers’ campus was encircled with guard towers and barbed wire—and the candidate recalled that he professed some shock that conditions there were so bad that workers had to be penned up. No, that wasn’t it at all, his guide insisted: the towers and wire fences were there to keep out people desperate to come in and work there.
It’s the sort of anecdote designed to garner appreciative chuckles among right-wing donors—you see, everyone misunderstands just how awesome it is to work for us!
It also falls instantly apart under critical scrutiny. If aspiring workers were mobbing a workers’ encampment to somehow sneak their way onto a production line, they’d be detected by the plant’s management, and duly evicted. Even if they eluded early detection, then come nightfall, they’d be rather conspicuously bedless. (Once more in the real world, hierarchies trump resourceful networking.
In short, Scott Prouty’s outrage was abundantly justified. Romney “just walked through this horrendous place and thought, ‘Hey, this is pretty good,’” Prouty explained to MSNBC host Ed Schultz. Indeed, the reason Prouty leaked his video to Mother Jones editor David Corn had nothing to do with the 47 percent remark; he did it because Corn had earlier published an expose of how Romney had steered Bain Capital cash into several shady manufacturing concerns in China.
But that could never be a viable media meme in our information age. There was something too dismally old-school-plutocratic about the Republican nominee’s camaraderie with China’s strongman factory managers. American voters and media producers simply aren’t attuned to the notion that, at this late date, an aspiring leader of the U.S. economy is beguiled by a sweated workers’ compound as a vision of our great globalized free-trade future—any more than Paul Mason is detained by the boring and upsetting news that these same Chinese manufacturing moguls exploit their networked workforces by spreading disinformation across the gloriously liberating agoras of the social media landscape. We don’t like to linger on the thought that there’s precious little daylight, in the grand neoliberal scheme of things, between the enforcers of authoritarian factory discipline in the unfree East and the liberty-defending wizards of American private equity. Nor do we want, evidently, to disturb the placid, do-nothing lefty-libertarian saga of how the chirping devices coming off those selfsame assembly lines are covertly engineering capitalism’s predestined downfall.
No, we much prefer the story of how Chinese workers are the vanguard of info-liberation, because they use gadgets and microblogging platforms just like we do. And it doesn’t really matter whether the person spinning that fable is a maverick-visionary on corporate retainer like Kevin Kelly, a maestro of jukebox agitprop like Jeremy Rifkin, or a reformed socialist like Paul Mason. Maybe this is how history ends after all.
Chris Lehmann is senior editor of The Baffler, coeditor of Bookforum, and author of Rich People Things. His latest book, The Money Cult﻿, is forthcoming in May from Melville House.