We will be seeing the professionals hit Devon later this year:
Futures Forum: Tour of Britain returns to Sidmouth: 9th September

However, what about cycling facilities for the non-professional person in the street?


No Cycle Lane? Rome Cyclists Show How to Paint Your Own 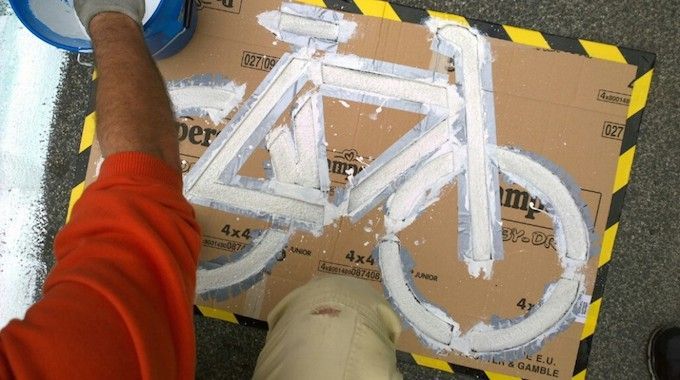 Cyclists in Rome have become so sick and tired of there not being a cycle lane where it is needed that they’ve taken matters into their own hands with some stencils, paint brushes and hard work!

According to Italian newspaper La Republica, it took around a dozencampaigners 45 minutes to create the cycle path in a tunnel connecting Esquilino and San Lorenzo. It cost about €140 in materials. 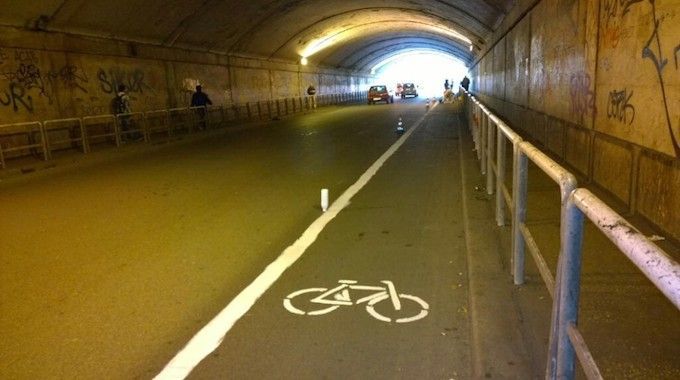 The group of activists published an open letter to Rome’s mayor Ignazio Marino, calling for a permanent cycle path to be placed there.

Have you ever been tempted to get out the paintbrushes in your area? Let us know in the comments below, or via Facebook or Twitter.

No Cycle Lane? Rome Cyclists Show How to Paint Your Own - Total Women's Cycling 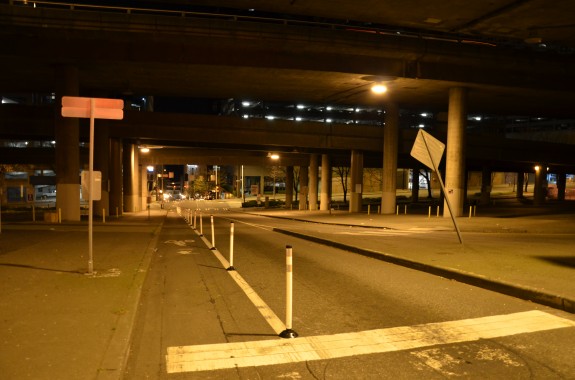 An extremely polite group of anonymous guerrilla road safety activists armed with $350 worth of reflective plastic pylons turned the painted Cherry Street bike lane under I-5 into a protected bike lane Monday morning. 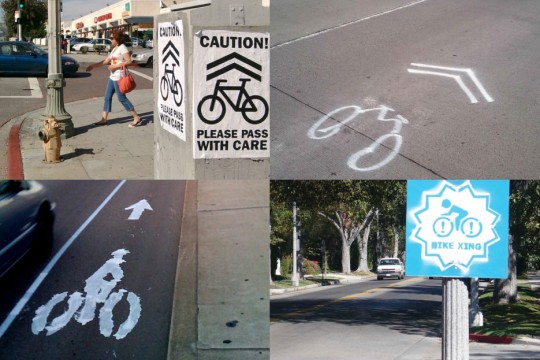 Bicycling has only recently become a serious planning consideration, and the vast majority of American city streets remain intimidating places for cyclists, despite their growing numbers. With city planners moving slowly to adapt, cycling advocates are taking matters into their own hands, painting bike lanes, share-the-lane “sharrows,” and other signage, often under cover of night.
Many guerrilla bike lane painters point to Toronto’s Urban Repair Squad as the pioneers of the practice, but some of the most voracious adherents can be found in Los Angeles, including an anonymous group of activists working under the aegis of the Department of D.I.Y.
Do-it-yourselfers have also installed bike route signs, “pass with care” posters, and even “softened” unfriendly square curbs with blobs of concrete. 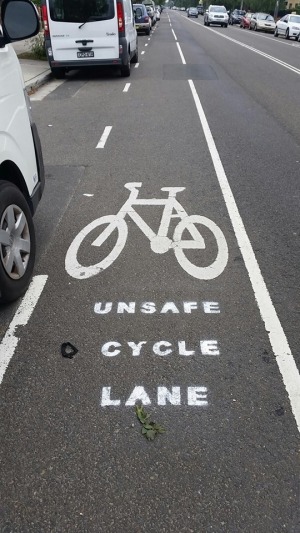 A cyclist in Boston was sick of a dangerous stretch of road that the city refused to fix, so he took on the matter himself. 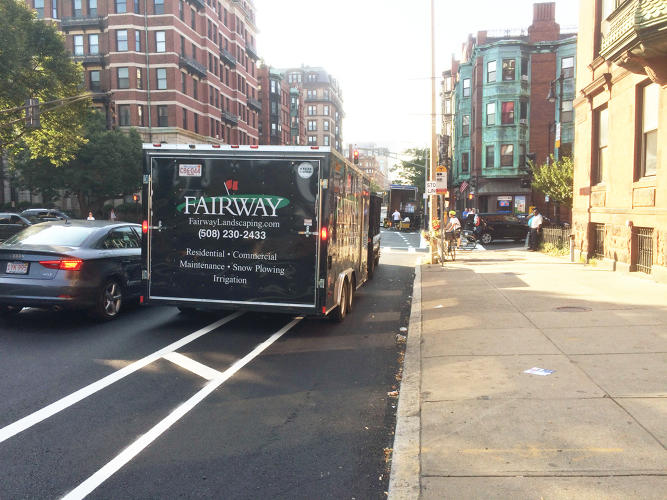 For Boston cyclists, Massachusetts Avenue can be a terrifying place to ride—drivers routinely ignore the stripes marking the bike lane and swerve into the path of bikes. After a truck driver recently killed one young bike commuter, the city promised to add some simple barriers to the lane. But they were slow to act.
So another bike commuter decided to take on the problem himself: On his way to work in Harvard Square, Jonathan Fertig dropped off a line of orange construction cones and potted flowers along the edge of the bike lane.
"I've been growing increasingly frustrated over the past year," says Fertig, who saw progress on bike infrastructure in the city start to slow when a new mayor came into office.
"When a young woman was killed by a truck driver last month while riding the route that I ride every day it hit me in an unexpectedly personal way," he says. "I was searching for a way that I could do something to amplify to fury that many of us in the walking and cycling advocacy community were feeling."
He picked up a copy of Tactical Urbanism, a book that lays out urban interventions like DIY bike lanes. Inspired, he "just decided to drop some cones in the buffer of the newly installed bike lane. In an instant, cars were no longer using the bike lane as a turning lane." 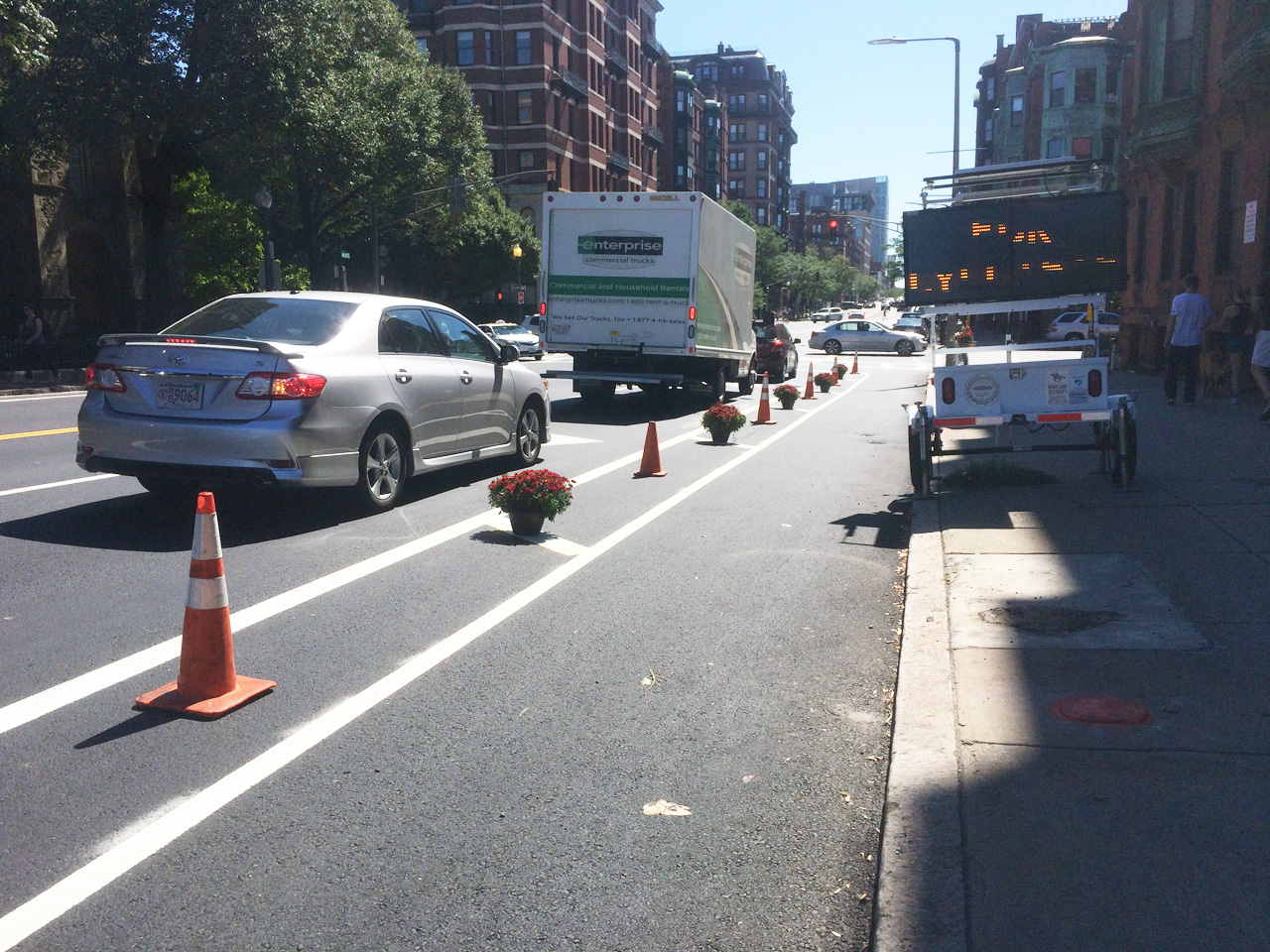