The Electoral Reform Society has just launched a campaign to ask for feedback across the country about the electorate's attitudes to local government:


Rotten Boroughs - Tell us your story

One Party States. Uncontested seats. There's something very wrong with local government in England and Wales. 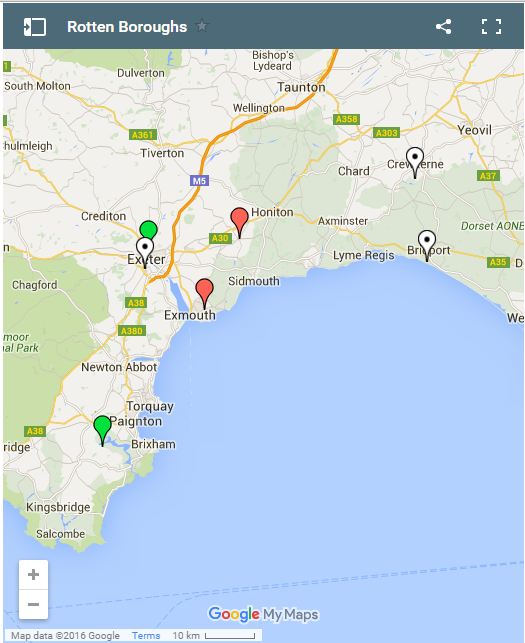 Good local government depends on decent local democracy. But many of us are now living in Rotten Boroughs - unaccountable and unresponsive, where our votes don't make a difference.
It doesn't have to be this way.
You can help us win the argument for fair votes in England and Wales. Have you been let down by local democracy? Do you live in a Rotten Borough?
More information

From one of the contributors in East Devon:

Jennifer
description
"East Devon District Council has never had anything other than a huge Tory majority since its inception in 1974. Our whole democracy relies on the elected recognising that they can be booted out by their voters. If this doesn't happen then complacency sets in - those who run the council become entrenched - it is quite easy to ignore what the electorate might want and do whatever works for those in power or, it is often felt, by those they are closely associated with. This impacts not only on the decisions made by those who have no fear of being voted out, but means that officers who are supposed to impartially represent whoever is in power also become 'tainted' and stop being independent. Voters who don't agree with decisions are powerless. Even if you live in a ward which can change hands it makes no difference to the overall strategy. Over time it impacts on every aspect of the areas covered by the council - innovation, efficiency, fresh thinking all suffer. And it leads to squabbles within the the majority party - coups and attempted coups, although tribalism tends ultimately to keep councillors in line. Couple that with Cabinet local government which effectively rewards those who are in with the leadership and only allows those who have a separate (pension) income realistically to work as a councillor and the whole system falls into disrepute among the electorate - hence the low turnout - 'what difference does it make whether you vote or not? At a broader level it leads to more extremism where those who disagree with the direction of the council become more and more frustrated and more and more likely to see any changes as negative. In East Devon when a unitary authority was proposed a few years ago the then leader used the newsletter produced by the district council and paid for by public money to attack the idea in a very partisan way. I complained and the council was reminded of the rules on publicity. Nothing daunted another newsletter was exactly the same and the council then spent tax payers' money in fighting the proposal through the courts. The then leader was subsequently defeated in the polls but nothing has really changed as it is the system which is at fault. Publicity on the latest scandal over the possible conflict of interest of the activities of a councillor who has now resigned has been suppressed on the grounds that the police are investigating. The whole sorry impact is to bring local government into disrepute, mean that no one cares if it is controlled by central government, that people who would be good councillors cannot be bothered to stand - as they don't think they can do any good and leaves the electorate frustrated. This isn't party political. I worked for LB Lambeth in 1970s and when the Labour old guard was swept away it was like a breath of fresh air."