Towards the end of the month, the Otter Trail shared use path group will be holding its AGM:

The Otter Trail Group will be holding its AGM at 19:00 on Tuesday 23rd February 2016 at the Lamb and Flag, Batts Lane, Ottery St Mary, EX11 1EY. Below are copies of the draft Agenda and our current Constitution.
Events | Otter Trail

And from the Otter Trail's homepage:

Pupils at The King’s School, Ottery St Mary are proposing a new shared use cycleway which follows the old railway track starting at Feniton through to Ottery St Mary. This will eventually link up with a continuation through Tipton St John and onto Sidmouth.  This web site is used to help you access up-to-date information about progress. 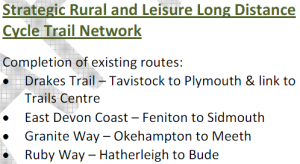 In January 2015 Devon County Council’s Place Scrutiny Committee reviewed the Council’s Transport Plans out to 2030.
Encouragingly a cycle route from Feniton to Sidmouth features in these plans. 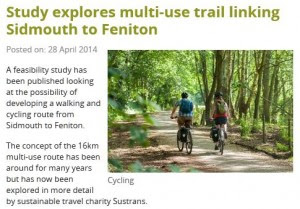 Sustrans have published a Feasibiliy Studyinto the Otter Valley Trail.  Paul Hawkins, the Devon Area Manager for Sustrans, writes:
“The East Devon countryside is a beautiful experience on foot and cycle, and the concept of linking up these communities with a safe route is very appealing and would provide both tourism and local commuting benefits. Delivery of a whole route would be complex, involve many stakeholders and take many years, but with careful planning sections of the route could be delivered to the benefit of local communities.”

If you would like to become involved or learn more about the Trail please contact us.
Otter Trail | Otter Shared Use Path
.
.
.
Posted by Jeremy Woodward at 15:22