Following on from an 'amicable critique'
Futures Forum: Transition Initiatives: a critical assessment

... here is another piece from the Green European Journal, which, although it might be about finding the right balance for a city, might have some lessons for a seaside town:


RECONCILING TOWN AND NATURE: AN EXPERIMENT IN PARIS

As Green Deputy Mayor of the 20th district of Paris from 2001 to 2014, Fabienne Giboudeaux, initiated an architectural complex of 47 social housing units, a gymnasium and a 600 m2 roof garden in one of the most densely populated district of Paris 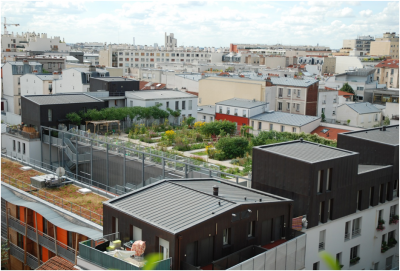 91 Rue des Haies, 20th district of Paris. Architects : Toa Architectes Associés. Developer: Paris Habitat. © Christophe Noël.
The contribution cities make to energy transition will probably be one of the targets assigned to urban development by the future French law on energy transition. Building projects and programmes in Paris are already required to consume less energy and reduce the part they play in the production of greenhouse gases. National regulations, and Parisian ones in particular, have introduced such objectives for the capital’s public buildings.
Although energy-saving efforts have begun, can the same be said of ecological transition? How can towns – whose ecological footprint keeps growing – respond to the destruction of the biosphere, its overexploitation, the exhaustion of biological resources and the collapse of biodiversity? Will it be possible to reverse this catastrophic tendency for living things, which include ourselves, and can doing so become one of the objectives of urban development planning?
Through green spaces, urban planning does allow space for living things, but that is not enough. Everything a city contains could play a part in ecological transition and help protect living things and ecological functions. It is true that such objectives do exist, but they are sporadic, experimental and isolated. This complex includes a gymnasium, social housing units and a roof garden.
As Deputy Mayor in charge of the development planning of the 20th district of Paris from 2001 to 2008, I wanted to create something local that would combine public welfare and social solidarity while reviving a link with nature by means of buildings which, theoretically, separate us from it. What interested me was moving from the paradox to the link. That is the real reason why this remarkable and renowned architectural operation is above all a political project. It is intended to demonstrate that the reconciliation between town and nature may not be so utopian after all.
A town can be transformed with buildings which offer a complete response to needs that are properly human and social while making a positive contribution to ecological functions. As part of the green and blue threads that form the texture of our policies, they redefine a territory in which they become a link in the continuous ecological cycle. We can thus begin to consider how development planning could overcome the paradoxes between city and country, nature and artificiality, what is mineral and what is living, the desire to dominate nature and the desire to rediscover it.
This architectural complex, designed by TOA Architectes Associés, consists of 47 social housing units, a gymnasium and a roof garden. It stands within a densely populated district of eastern Paris (more than 50,000 inhabitants per km²) and was delivered in early 2008. The 600 m² roof garden is cared for during the week by an integration association, on Wednesdays by children and at the weekend by local residents. A beekeeper has installed hives there. The gymnasium welcomes local secondary schoolchildren and local sports associations. When this down-at-heel district was being renovated, we took care to preserve the local population and the 47 social housing units enabled some of those people to be rehoused.

See also:
Futures Forum: Neighbourhood planning @ Frome Town Council >>>
Futures Forum: Toxteth and Turner: "It has taken the Turner prize to highlight that there is an alternative to replacing low-income housing with expensive flats."
Futures Forum: Sweden, Denmark and Norway have been voted the happiest countries in the world...

And:
Aldo Leopold: Reconciling Ecology and Economics | Center for Humans & Nature
Simplifying the argument | The Economist
Taking a de-binarised envirosocial approach to reconciling the environment vs economy debate: lessons from climate change litigation for planning in NSW, Australia: Town Planning Review: Vol 85, No 1
.
.
.
Posted by Jeremy Woodward at 01:00