The promises of technological innovation >>> >>> >>> >>> "So, if networked communication and cybernetic technologies are so potentially liberating, why are they so authoritarian in the forms they currently take?"

Google would like to be a little freer from paying tax:
Futures Forum: Corporation tax, small towns and small businesses >>> giving SMEs the same 'level playing field' as multinationals >>> from Google to Crickhowell and back again


"There is also a libertarian streak in parts of Silicon Valley that allows some to believe they can spend their tax dollars better than the government ever will."
Silicon Valley’s New Philanthropy - The New York Times 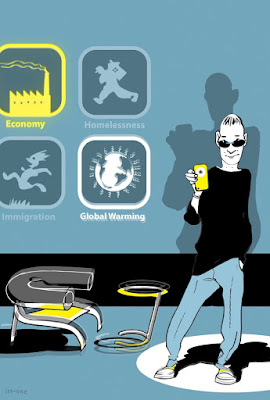 "In Silicon Valley, government is considered slow, staffed by mediocrities, and ridden with obsolete rules and inefficiencies."
Change the World - The New Yorker

This is called 'the Californian Ideology': "the rise of networking technologies in Silicon Valley in the 1990s was linked to American neoliberalism and a paradoxical hybridization of beliefs from the political left and right in the form of hopeful technological determinism."
The Californian Ideology - Wikipedia, the free encyclopedia
Corporate Hippies Own The Future - Spook Magazine

How 'successful' has this really been?
Futures Forum: The promises of technological innovation >>> "The rise of the techno-libertarians: the five most socially-destructive aspects of Silicon Valley"

And yet many of these 'entrepreneurs' have benefitted from the 'innovations' coming from the state:

5 libertarian oligarchs who made fortunes off the government they want to destroy - Salon.com
The Government Created The Internet: So, Who Cares? - Forbes
Government Did Invent the Internet, But the Market Made It Glorious | Mises Daily

Much of what was promised as 'glorious' has in fact ended up as disappointment anyway:
Futures Forum: Techno-promises unfulfilled >>> Where did the future go?
Futures Forum: "Where are the flying cars?" or, "What happened to derail so many credible ideas and prospects?"

Technology is struggling to be free:


A New World, Struggling to be Born

In an article at Alternet a while back Richard Eskow (“Rise of the techno-Libertarians,” April 12, 2015) made some excellent criticisms of the capitalist model of “techno-libertarianism” centered on Silicon Valley. Most of his points relate in some way to the profit-driven business model of the tech industry, which treats products primarily as a source of revenue — or more accurately rents — rather than an end in themselves. This primary evil carries with it a number of secondary symptoms, like the pathological culture of motivation-speak and buzzwords and the cult of “Great Men” like Bill Gates, Steve Jobs and Peter Thiel. Monopolies transfer income from workers and consumers to rentiers. And the authoritarian form taken by the technologies, as they are developed under a proprietary information regime, regards users less as the ultimate reason for the technologies than as a revenue stream to be permanently locked in via user agreements and licensing.

So if networked communication and cybernetic technologies are so potentially liberating, why are they so authoritarian in the forms they currently take? The Italian Marxist Antonio Gramsci, who died in Mussolini’s prisons in the 1930s, once wrote that “the old world is dying, and the new one struggles to be born; now is the time of monsters.” In the case of the new world offered by liberatory technologies, most of the birth struggle results from the principalities and powers of the old world fighting to imprison the forces of the new world in their old institutional framework.

Lewis Mumford borrowed a term from geology — “cultural pseudo-morph” — to describe the process by which new, potentially liberating technologies were instead incorporated into the institutional forms of the old world, like new mineral deposits that gradually formed a fossil in the shape of buried organic matter. He was referring in particular to the technologies of what he called the neo-technic age, like the electric motor, which by nature were low-overhead and decentralizing. The optimal use of such technologies would have been to replace the paleotechnic order (in which large factories were built to economize on steam power by running as many machines as possible off a prime mover) with a new model of manufacturing where a motor of any size could be built into a machine wherever it was used, the machine could be scaled to production flow, production flow could be scaled to immediate demand, and the site of production could be located close to the point of consumption.

Instead, the forces of the old paleotechnic world were strong enough to put the new wine of electrical power into the old institutional framework of Dark Satanic Mills, in the form of mass production (which threw away all the special advantages of electric power for decentralized, lean production).

Although Mumford didn’t live to see it, the internal crisis tendencies and inefficiencies of mass production eventually led, from the ’70s on, to the outsourcing of actual production to small job-shops owned by independent contractors. The new technological wine still remained in the old corporate bottles, thanks to the use of patents and trademarks to enforce a corporate monopoly on the distribution of a product they didn’t actually make. But the rapid implosion in cost and scale of tabletop CNC machinery, especially open-source versions, are unleashing productive forces that are making “intellectual property” unenforceable. It’s only a matter of time before garage factories using small-scale general-purpose machinery to produce on a craft model are ignoring patents and trademarks and making goods for local neighborhood markets all over the world.

The same is true of network communications and digital culture. Libertarian Marxists like the Oekonux group in Germany and the autonomists Negri and Hardt see “commons-based peer production” as the kernel of a post-capitalist society that will gradually emerge from within the interstices of the present system, coalesce into a new system, and supplant the old one.

These new technologies of abundance are still held captive within proprietary frameworks like Windows and OSX operating systems, corporate-owned sharing apps like Uber and AirBNB, and the like — enclosed in a neo-feudal “intellectual property” framework to enable the extraction of rents.

But the days of this intermediate stage are numbered. The productive forces unleashed by these new technologies cannot be contained by the old authoritarian class relations. Proprietary “sharing” apps like Uber, which create no value beyond interposing themselves as toll-gates between providers and users, are eminently vulnerable to replacement by hacked, open-source versions. And when communications technology enables horizontal networks to coordinate their projects more efficiently than corporate hierarchies, and open-source micro-manufacturing technology is so cheap that six months skilled blue collar pay can stock a garage factory with tabletop machinery, there’s nothing to stop producers and consumers from “Exodus” (Negri’s and Hardt’s word) from the system, to deal with each other as human beings and treat the technologies as means for their own dignity and empowerment.

Center for a Stateless Society » A New World, Struggling to be Born

“The old world is dying and the new world struggles to be born. Now is the time of monsters.”

Orwell, Huxley and America’s Plunge into Authoritarianism
Austerity UK. A time of monsters. | Academic Anonymous
ZCommunications » Self-Organization In A Time Of Monsters

Meanwhile, Silicon Valley is facing a couple of problems:

Technology giant Apple may face legal action over the alleged practice of disabling updated iPhone 6 devices that have been repaired by third parties, with one U.S. law firm investigating the possibility of a class-action lawsuit.

Who is paying for all of this?
Futures Forum: Planned Obsolescence: and The Men Who Made Us Spend
Futures Forum: VW... and making 'wholly opaque disposable vehicles' >>> rather than making vehicles which 'run for a long time and are easy to fix' .
.
.
Posted by Jeremy Woodward at 14:23