It seems that many of the 'best places to live' are also the most expensive:

Is Winchester really the 'best place to live' in Britain? 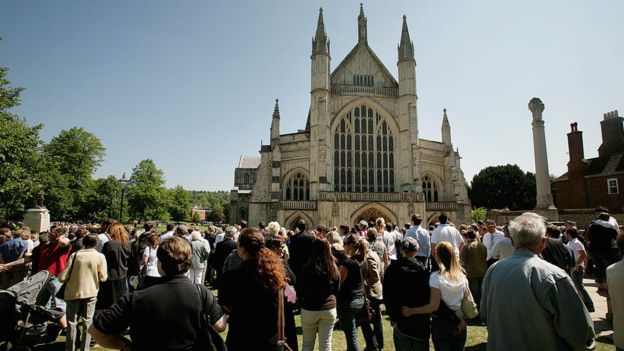 Winchester has been named the best place to live in Britain, but what makes it stand out?
The Hampshire city was praised by the Sunday Times for its "food, festivals and feel-good factor" and described as "a tasty slice of authentic history".
And for the last three years Visit Winchester has been promoting it as "the perfect English city" with good schools, low crime and a range of tourist attractions.

The city, which is home to about 45,000 people, could also be a desirable place to live because it is only an hour from London on the train, and has an unemployment rate of just 0.6%.
But if you're strapped for cash affording to live in Winchester could pose a challenge, with some people completely priced out of renting or buying.
The city dates from 150 BC and not only was it chosen as England's capital by King Alfred the Great, it has also been suggested it could have been the real site of King Arthur's legendary Camelot.
It also boasts the largest farmers' market in the UK, one of Europe's largest cathedrals, the restored Edwardian Theatre Royal Winchester, and dozens of upmarket shops and restaurants.
Mayor Angela Clear said the city's history and lively modern atmosphere are both part of what makes it special. She said: "It has so much tradition and that is what people love. We have the lovely cathedral, and fantastic restaurants. All the year round there is something going on for people to take an interest in, with markets and festivals and all sorts of lovely things. And of course the people are so nice and friendly."
On Facebook people echoed Mrs Clear's view, calling the city "very beautiful" and "a really lovely place".
But it hasn't always been regarded quite so highly, making a surprise appearance in the first Crap Towns book in 2003 and placing fifth behind Hythe and ahead of Liverpool.
And on Facebook not everyone agreed about the choice, Helen Streeter said it was "one of the most polarised places in the country in terms of wealth and poverty".
Lindy Loo expressed a common view when she said said: "It is a lovely place but it's expensive... I wouldn't recommend it if you're on a budget."
Which is an impression borne out by house buying website Zoopla.co.uk, which lists the average house price over the last years as £520,314, and the average rent for a one-bedroom property as £821 per month. It also shows that house prices have increased 10% in 12 months, and 30% over the last five years. And the site lists Sleepers Hill as Winchester's most expensive street, where the average house costs an eye-watering £1,530,938
Sue McKenna is the general manager of homelessness charity Trinity Winchester and said rising house prices have led to problems for anyone on a low income looking to buy or rent a home. And she added that she did not think the city being dubbed Britain's best would help her clients. She said: "The people we work with are completely priced out of the market, even renting a private house is out of reach. For our clients this is not going to help, it is going to make it much more difficult for them." She added that in recent years house prices and rents have increased hugely and what the city really needs is more social housing.