Ecological Communication... and building trust for a Sustainable Society

We cannot separate ourselves from our environment:
Futures Forum: Slavoj Žižek: on there being "no metaphysical 'beyond' to put our waste" ..... on "the crisis of late capitalism" ..... and on "the comforting mythology of the recycling industry."

An influential study of 'ecology' and 'the environment' came out in the late 1980s, looking at these relationships: 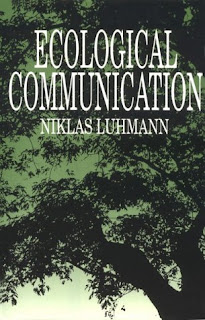 Niklas Luhmann is widely recognized as one of the most original thinkers in the social sciences today. This major new work further develops the theories of the author by offering a challenging analysis of the relationship between society and the environment.

Luhmann extends the concept of "ecology" to refer to any analysis that looks at connections between social systems and the surrounding environment. He traces the development of the notion of "environment" from the medieval idea—which encompasses both human and natural systems—to our modern definition, which separates social systems from the external environment.

In Luhmann's thought, human beings form part of the environment, while social systems consist only of communications. Utilizing this distinctive theoretical perspective, Luhmann presents a comprehensive catalog of society's reactions to environmental problems. He investigates the spheres of the economy, law, science, politics, religion, and education to show how these areas relate to environmental issues.

Ecological Communication is an important work that critically examines claims central to our society—claims to modernity and rationality.

Here is a video in Italian - with English subtitles - on the theory:
ecological communication - YouTube

And here is a critique of Luhmann's ideas:
Ecological Communication | Niklas Luhmann

Which takes us to this video:

I was really pleased to see a video presentation of my favourite approach to sustainability¹ talking more openly about building trust as a necessity for social sustainable societies.

Even though I remember trust being mentioned within the community, I’ve always had a sense that they could be entertaining the idea that we should find universal social principles for too long.

Why I think generic social principles are an illusion

I was really impressed when I read the work of the Chilean economist Manfred Max-Neef² and what is behind his list of basic human needs.
His work makes interesting points on Self-reliance at the Center of Development and the economic use of satisfiers. He claims that we can identify a taxonomy of fundamental human needs. For some people those fundamental human needs could be a starting point for setting up universal needs and generic social principles.
Although a research on human needs might bring a great set of topics to inform the dimensions of being human for group conversation, basic human needs in bullet points do not work as principles of social sustainability in the same way natural principles do³. I argue that the way we relate to the natural world and our social world is different when we are talking about design and intervention.

Universal human needs might provide a framework for conversations but are not a strong base for systematic decision-making. This is because social principles need to be explored in community conversation (and in some cases, agreed upon by the community) for the sake of both process and content:
For social sustainability our social systems should be designed in participatory ways³.

As a species we have never designed a natural system. The most we have done was try to manage natural systems, although without success as a broad perspective have been showing. Nothing that we have ever designed shows, for instance,  intelligence and adaptation like a living organism does.
It is understandable that we use living-organism metaphors to inform systems that we can design. By doing that we can emulate resilience and adaptation shown in natural systems, but also these metaphor can be misleading in taking us to believe we design living systems.
As an example, people really want to connect concepts like autopoiesis to the organisational context. While autopoiesis can support us to create another narrative of how we would like to organise ourselves, no system designed by humans is autopoietic, even though their creators, people, are autopoietic systems⁵.

A social system can be a purposeful agreement made for people or between people to live and act together.

We can design social systems to be supportive of our collective needs and ask natural system to inspire us, but there is no ‘self-creation’ of human-made systems, only replication of a story that we have previously created. Participation in creating this story is key in designing social systems.
It is important to notice that the word design can also be misleading. Design is commonly understood as creation, but social systems require recursive participation, a system that contains space for re-design.
Re-design is key to check both context and purpose of a system over time. Spaces of design and re-design build trust among people and between people and their systems. Many institutions and organisations are examples of social systems that have lost track of its end purpose or are trapped into a now out-of-context initial design/story. Some that are made to be at service and support people end up becoming means of authority over people.
If we feel coerced or alienated from a system we are part of, we obviously do not trust it. Trust is what makes social systems work and realise their potential as instruments of collective human aspiration. Trust can only be created and sustained if we have spaces of participation.

¹ Learn more about The Natural Step Framework.
² Read about Human Needs in the works of Manfred Max-Neef et al. and other social psychology studies.
³ Read Participatory Backcasting from Principles.
⁴ What’s the meaning of the Universal Declaration of Human Rights? Watch [～30min] Escaping the Universal Declaration of Human Rights>.
⁵ My claims seem to be against what Niklas Luhmann understood from social systems theory and more towards the work of Jürgen Habermas.  My brief exploration of Luhmann’s work in here.


Building Trust for a Sustainable Society
.
.
.
Posted by Jeremy Woodward at 14:54