Devolution and the budget >>> “Would it not be easier to dissolve the people, and elect another?”

The misgivings about proposals for devolution are gathering pace:
Futures Forum: Devolution, LEPs and today's budget

As pointed out by the East Devon Watch blog, the mainstream press is voicing these concerns more and more loudly:
Daily Telegraph works out that devolution is undemocratic and unaccountable | East Devon Watch

Here is the piece from yesterday's Telegraph:

Voters don't want them, but the march of the mayors is now unstoppable

Comment
In Bertolt Brecht’s poem The Solution, he imagines the fury of a Soviet commissar when a vote goes the wrong way. “Would it not be easier,” he muses, “to dissolve the people, and elect another?” George Osborne must have had similar thoughts four years ago when he asked 10 cities, in a referendum, if they’d like a directly-elected mayor. Nine said “no”. It was the wrong answer – as they are now finding out.
"The unwritten rule of this Government: if you're good to Georgie, Georgie's good to you"
In his Budget this week, the Chancellor told us more about his plan to correct the misguided souls of Birmingham, Coventry, Manchester and Sheffield. Local authority chieftains are being offered more powers (and, doubtless, accompanying pay rises) on the condition that they accept a mayor. The Chancellor has promised that he, personally, will “not impose this model on anyone” because his new municipal friends will do the imposing. But he has said he will not “settle for less” than the mayors which the voters so ungratefully rejected. More local democracy is coming, whether the public want it or not.
It’s hard not to admire his audacity. Soon, all nine of the cities which rejected the offer of a mayor in referendum will have one anyway. Groups of councils are given extra powers – over areas like housing and policing – in return for accepting Osborne’s mayor. When a deal is struck, it allows him to say that “Greater Manchester has agreed to have a mayor” – when the people of Manchester have had no say in the matter whatsoever. He is referring to local politicians. In this way, the Chancellor has been able to force regional devolution upon an England that really doesn’t want it – and bring fundamental change in our democracy with no real debate. 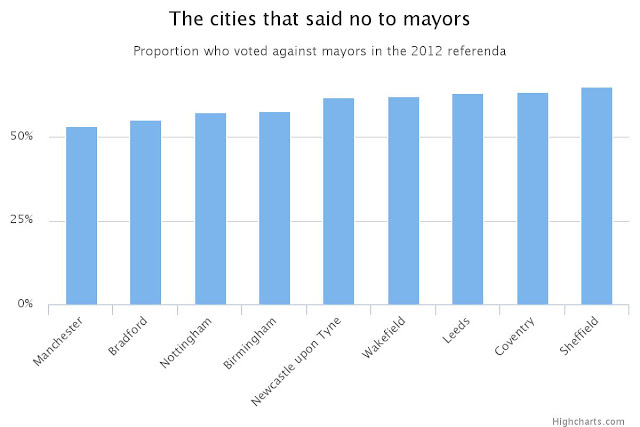 As ever, with George Osborne, there is a political agenda. The Tories are weak in the north of England and he wants to reverse this by positioning himself as the creator of a “Northern Powerhouse” and striking alliances with Labour mayors. Then come the cuts: his Budget earmarks 2019 as a year of fiscal terror with more austerity than any year so far. Devolution means that local authorities will help him swing the axe; the more they control, the more cuts they’ll make. But they don’t protest. We’re seeing the emergence of Osborne’s Law: that no local government ever refuses the offer of more power.
The Chancellor has a great love of US politics, and is beginning to apply it to Britain. We are seeing US-style city mayors even in places like Lincolnshire and the West of England, which aren’t cities. We’re also seeing US-style pork barrel politics, a practice whereby the Chancellor rewards his allies by granting public money to their pet projects. The appendix of his Budget book yesterday listed the gifts from the new Court of King George. For Birmingham (whose council has agreed to a mayor) a £14 million “innovation centre”. To Bristol, similarly compliant, a new junction on the M4 and £620,000 for a “Brunel Project”. It all underlines the unwritten rule of this Government: if you’re good to Georgie, Georgie’s good to you.
As Nigel Lawson once observed, the worst mistakes in politics are made when there is a cross-party consensus: it means the ideas are not being properly probed, and sloppy thinking can become sloppy policy. So it is with mayors. It was a Labour idea, later adopted by the Tories and also endorsed by the Liberal Democrats – so instead of debates, we have had an orgy of mutual congratulation. Aside from a few caustic remarks from the Communities Select Committee, no one has pointed out the flaws in this radical remake of English local government.
Which is odd, because the flaws are perfectly evident to the voters who tried to stop all this when given the chance. Since 2001, there have been 50 mayoral referendums, of which just 15 agreed to mayors. Many have come to regret it. The characters who scrape through are seldom adverts for the project. Mayors have ended up embroiled in scandals ranging from electoral fraud (Tower Hamlets) to the theft of ladies’ underwear (Scunthorpe). The Tories fantasise about populating the provinces with little Boris Johnsons. But the experience of local government tends to be less than encouraging. No matter how beautiful the political theory, decent mayors are hard to find in practice.
There are, of course, examples of brilliant local government leadership – chiefly in Manchester, upon which Mr Osborne’s plan is based. But there’s a limit to how far the Manchester template can be replicated. The Chancellor’s latest idea this week was a Mayor for East Anglia, a wildly and gloriously disparate region. Businesses in Cambridge have tried to point out the flaw: they compete on a global, not a regional, stage. They don’t need or want a new regional bureaucracy. But the Chancellor wants it, and other parties want it, so it’s happening.
Then comes the problem of accountability: every councillor in Manchester City Council is a Labour one; every councillor in Mid Sussex Council is Tory. There are other huge political imbalances in town halls across the country, because every party struggles to keep a genuinely national presence. Then there’s the decline of the local press, which also raises questions about scrutiny: there is now just one dedicated education correspondent left in Scotland, for example. There’s all too much to write about: the rise of educational inequality has been one of Scotland’s worst national scandals.
"The march of the mayors is, now, unstoppable. England’s only option is to hope that they work"
Not so long ago, Scots and the Welsh were being told what England is being told now: that UK government is broken, power needs to be devolved, local is always better. Almost two decades later, you can search in vain for any public service that is better than in England. NHS Wales has been a disaster. New politicians tend to hoard the powers which have been passed down to them. So when Tony Blair was granting voters the choice of schools and hospitals they used, politicians in Edinburgh and Wales kept the power for themselves. This is the paradox: Scottish parents and patients have less power, because of devolution.
At least, before all of this, the Scots and the Welsh had a proper debate and a referendum. England has been denied a debate, and the results of its referendums have been ignored. The march of the mayors is, now, unstoppable. England’s only option is to hope that they work.

Voters don't want them, but the march of the mayors is now unstoppable - Telegraph
.
.
.
Posted by Jeremy Woodward at 01:00