Here is the latest from Rob Hopkins' blog: 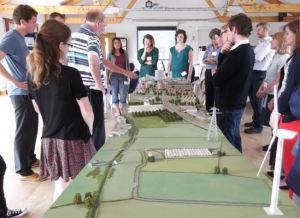 A number of significant changes have happened since October 2014.  Not least comes an unprecedented global commitment to tackle climate change under the CoP in Paris last December.  The Paris Climate Change Agreement sees consensus from 196 countries around the world on the need to take action on climate change.  The agreement commits nations to keep global average temperatures “well below 2°C above pre-industrial levels, [and] to pursue efforts to limit the temperature increase to 1.5 °C”, leading to no net increases in carbon emissions in the second half of this century. This agreement and the pledges from individual countries promise massive investment in renewable energy technology and huge increases in renewable energy capacity worldwide.

However, here on the homefront, Government action on low-carbon development is seriously at odds with the emerging global consensus.
Since the general election in May 2015 where the Conservatives achieved a minority government we are seeing the Conservative ideology permeate our social, economic, environmental and political terrain.  Environmental policy has taken a particular battering.

In terms of Energy, the rise of community energy encouraged by the Coalition government’s Community Energy Strategy has seen the creation of over 450 such groups, according to Community Energy England.  However, the current government has withdrawn tax relief on investments for community energy, which was a great financial incentive for support for such schemes.  The Feed-in-Tariffs have also been reduced for different renewable technologies – up to 87% for solar PV, though there have been some recent meager concessions by the Government as a response to industry lobbying.

The government argued that these schemes were too much of a good deal for investors.  However, these changes have cut the lifeline to groups that have only just started to develop projects in their communities. In fact, an estimated 1m fewer homes, schools and businesses will be powered by renewables because of these changes. Meanwhile the government shows continued support and subsidies for fracking and fossil fuels. Wind has been cut asunder, with on-shore wind no longer permitted, unless areas have been specifically allocated for this purpose in Local Plans or Neighbourhood Plans, and evidence is demonstrated of support from the wider community. This has played out in appeal decisions as a virtual veto on wind proposals.  Given the time to achieve such evidence it is unlikely that a Neighbourhood Plan could produce this before the subsidies for wind are cut in 2016, making them unviable requirements to implement anyway.

In terms of Planning, there have been massive changes to policy on low-carbon new homes.  We did have a target of meeting zero-carbon homes by 2016 (and non-domestic by 2019), but with 2016 just around the corner the government has deemed this too stringent.  Two key things revoked this commitment. Firstly as a result of a government consultation – the Housing Standards Review - theCode for Sustainable Homes has been scrapped as the government’s standard for domestic dwellings. A number of draft Neighbourhood Plans, many of which supported by Transition Initiatives, such as Felpham, Kirdford and Chapel-en-le-Frith, had hoped to stipulate higher codes 5 and even 6 (i.e. above the mandatory requirements).

Instead, the government sees that increasing the energy efficiency standard of Building Regulations by 20% from 2010 building regulations (or equivalent to Code for Sustainable Homes level 4) helps the housing sector – e.g. developers – to build more by simplifying and making the planning system more ‘efficient’.  As a result Neighbourhood Plans can no longer stipulate technical standards higher than building regulations, but they can indicate a preference for such measures in statements of intent, e.g. this community will look favourably upon new dwellings that exceed building regulations.
There is a hint from a Neighbourhood Plan Inspector (advising Calne, Wiltshire) that where a Neighbourhood Plan identifies additional housing (i.e. beyond that needed to meet the 5 year supply set out by Councils), higher sustainability standards can be insisted upon. Following the same logic, it might be possible, where additional housing is allocated in a Neighbourhood Plan, to set other pre-conditions, for example requiring new developments to meet specific local housing needs in that particular neighbourhood.  This is detailed in the new iteration of CSE’s Guidebook, which can be viewed here.

Commercial buildings have been largely unaffected by the policy changes as the government did not formally adopt a technical standard for commercial buildings (e.g. as they did for the Code for Sustainable Homes). Neighbourhood Plans can still have a policy of using BREEAM ‘Very Good’ or “Excellent” for commercial properties, for instance.  Individual developments can use BREEAM Communities on mixed development sites (e.g. commercial and residential), which insists on high community engagement and environmental standards.  However, such standards are generally used on individual mixed-use sites and cannot be applied to residential-only dwellings through the Neighbourhood Plan process.

Sustainable transport has been largely unaffected by the recent policy changes (other than taking out road tax reductions for low-polluting vehicles – see table below).

With the success of the Paris talks, the world is questioning why Britain is acting in a way which is at odds with the general trend to incentivise low-carbon action.  In this changed policy context what can grassroots actors such as Transition Initiatives do to respond to the need for low-carbon development?   The following table sets out the key changes and scope for action:

CSE is midway through a two year project to encourage Neighbourhood Plans to tackle climate change and sustainability issues.  Inspired by theResilient Cities initiative, CSE has been encouraging Neighbourhood Planning groups to examine the resilience challenges their communities face.

Many resilience issues (for example, energy affordability, vulnerability to flooding) are universal and apply to all communities, but how these play out locally will vary from community to community.  The issues that might affect a rural market town (typically enforced car dependence, lack of local employment options, poor cycling / walking infrastructure) will be very different to those affecting an inner-city suburb, and different strategies may be appropriate. Consequently Neighbourhood Plans are a good vehicle for assessing resilience issues at this fine-grained level, leading to appropriate strategies, and are a good mechanism for normalising and localising discussions of the consequences and responses to climate change.

Planning as a vehicle to demand low-carbon action from below

These policy changes cast doubt on whether the UK can meet the challenge of responding to existing domestic and EU commitments (if Britain remains in Europe, that is…), and the emerging global drive to take action on climate change. The government’s attack on renewables threatens to waste the potential of the UK economy to capitalise on the opportunities offered by the Paris agreement - DECC’s own figures suggest that the solar FIT reduction could slash jobs in the solar sector by approximately 60%[1]

What we can hope is that in the wake of Paris that grassroots actors - including Transition Initiatives, Neighbourhood Planning groups and Local Authorities - can show their commitment to these issues from below in their determination to achieve low-carbon communities. The creation of a low-carbon Neighbourhood Plan is just the beginning – implementing, sustaining and consolidating the dialogue on low-carbon action that has begun through the Neighbourhood Plan process is vital.

To contact Amy or Dan with any questions relating to the issues raised in this article,
Amy Burnett a.burnett@pgr.reading.ac.uk or Dan.Stone@cse.org.uk

Amy Burnett is a PhD Researcher at the Real Estate and Planning Department at the Henley Business School, University of Reading.  Her current research focuses on the role of communities in influencing low-carbon Planning in the context of Neighbourhood Plans.  Amy has worked on a number of community development projects with a particular emphasis on monitoring and evaluation.  Amy's work aims to promote creative and inclusive engagement between community groups and their local government.

Daniel Stone is a chartered Town Planner working for the Centre for Sustainable Energy on their Neighbourhood Planning project, helping neighbourhood planning groups embed climate change and fuel poverty objectives in their plans.  Prior to joining CSE, Dan had 14 years’ experience as a local authority Town Planner in a range of rural and urban authorities, with experience of negotiating and determining a wide range of developments including significant housing, retail and commercial schemes and renewable energy projects.  Dan also had a brief stint working in a consultancy, working on feasibility studies and seeking planning permission for wind farms.