Climate change "poses the single greatest long-term threat to birds and other wildlife, and the RSPB recognises the essential role of renewable energy in addressing this problem."

One controversy over solar farms is whether it is detrimental or not to the environment:
Futures Forum: What are the arguments for and against solar farms?

The RSBP has come out in favour:
The RSPB: Advice for farmers: Solar farms
Anesco and RSPB shine light on solar farm biodiversity - Anesco

The project will see the 'unused' margins around solar panels used to encourage butterflies and bees, and provide nesting areas and food for threatened birds such as the skylark

Threatened wildlife including turtle doves and skylarks could benefit from a scheme which has been launched to create natural habitats at solar farm sites.

The project by wildlife charity RSPB and clean tech company Anesco aims to boost wildlife at the firm's solar farms across England and Wales.

Wild flower meadow areas and seed-rich planting in the "unused" margins of the farms and where tracks go between the panels will help boost insects such as bees and butterflies and provide food and nesting areas for birds, the RSPB said.

The scheme will reinstate habitats which have been lost in the face of agricultural intensification, hitting farmland bird species.

The project will see the RSPB advising Anesco on providing for "priority" species – those in most need of help – at its existing solar farms, in places ranging from Cornwall to Suffolk, Yorkshire and the Isle of Anglesey, with the advice also helping to form plans at new sites.

Darren Moorcroft, RSPB head of species and habitats conservation, said: "It is an excellent opportunity to develop habitats for nature in need of our help, showcasing how a renewable energy business and wildlife conservation can be delivered in unison. While providing clean energy and sustainable development, we can still continue to give nature a home."

He added: "We're interested in renewable energy because the threat of climate change is the biggest threat to nature and to people. The opportunity of this partnership is both mitigation and adaptation. The panels are helping us to reduce our carbon emissions and the habitat within the solar farms can create the places for priority species to live and survive and thrive."

Adrian Pike, chief executive of Anesco, said: "Encouraging biodiversity has always been a priority for us and we're thrilled to be working with such a respected and knowledgeable organisation as the RSPB to build on our existing commitment.

"We will be maximising the positive impact that our sites have for local wildlife, while focusing on supporting those species that really need it."


We insist that wind farm proposals are subject to rigorous environmental assessment before development is permitted.

Climate change poses the single greatest long-term threat to birds and other wildlife, and the RSPB recognises the essential role of renewable energy in addressing this problem.

To meet these targets, the RSPB favours energy efficiency together with a broad mix of renewables, including solar, wind, biomass (for heat and power) and marine power; used in ways that minimise damage to the natural environment.

We support local solutions that enable individuals and communities to generate their own power close to their homes and businesses. But we will also need large-scale deployment of renewables to meet our ambitious climate and renewables targets.

The RSPB: Wind farms
The RSPB: The Lodge: Why is the RSPB erecting a wind turbine?

As recently reported in the Independent: 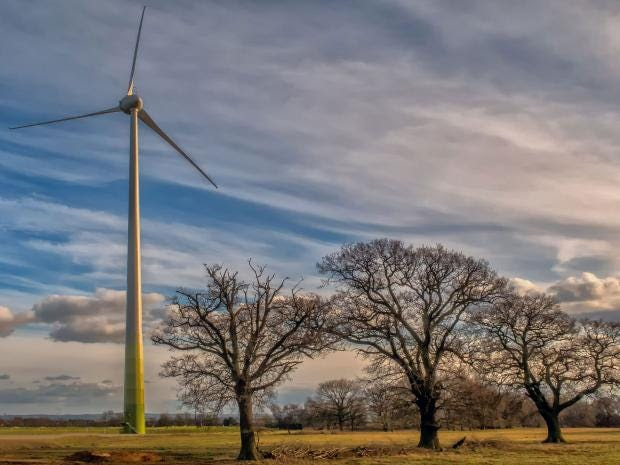 An artist’s impression of the RSPB’s wind turbine PA

A 100-metre high wind turbine is set to start generating power at the headquarters of the Royal Society for the Protection of Birds, powering almost 500 homes.

Construction of the turbine has been completed at the RSPB’s Lodge headquarters near Sandy, Bedfordshire, by energy company Ecotricity.

The turbine, which will save an estimated 800 tons of carbon emissions a year as it generates the equivalent of half the electricity the RSPB uses across its 127 sites, is part of moves by Europe’s largest nature conservation charity to make its operations greener. 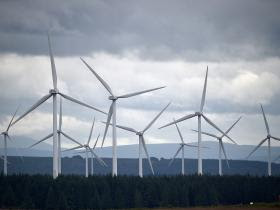 Pursuing wind power is not without controversy for the RSPB, as critics of the technology warn that turbines pose a threat to birds, particularly rare species that are already suffering from low numbers or migratory species, as well as to bats.

But an article in the journal Nature a few years ago pointed out that turbines killed far fewer birds than other human causes such as buildings, cars, power lines, pesticides and pet cats.

The RSPB warns climate change is the “single biggest threat” to birds and other wildlife and says it has been involved in hundreds of wind-farm applications to make sure local bird nesting activity, migratory patterns and flight paths are taken into account.

The charity said it had worked in partnership with Ecotricity on three years of detailed ecological and environmental research to confirm the location at its headquarters was suitable for a turbine.

RSPB director of conservation Martin Harper said: “Climate change is the single biggest threat to our planet. This is about our birds and wildlife as well as our way of life.

“Around the world, and even in the UK, we can already see how these changes are affecting wildlife, the places where they live as well as [causing] damage to our homes and disruptions to the economy.

“It is down to everyone to play their part. In the UK we have the potential to generate a significant portion, if not all, of our electricity from sustainable sources.”

He added: “Using wind energy is a proven and reliable technology that reduces greenhouse-gas emissions. But turbines must be located where they are sympathetic to our natural environment.”

Ecotricity has financed and installed the wind turbine, which will produce power at a discounted cost to the charity. Any excess electricity that is generated is then sold by the energy company in a scheme which also powers operations by Sainsbury’s, Ford and B&Q.

Ecotricity founder Dale Vince said the partnership allowed the company to work with customers to make green energy where they needed it and to share the benefits.

“Green energy puts power in the hands of the people; the technology allows us to democratise and decentralise energy in Britain. Green energy is also a strong economic and an environmental choice. It is about jobs and the new industrial revolution – about building a truly sustainable economy in Britain.”

And:
Futures Forum: The solar-powered smart grid
Futures Forum: The New Oil Order: & the rise of alternative energy sources
Futures Forum: Devolution for Devon and Somerset? >>> nuclear vs solar >>> centralism vs localism
Futures Forum: SidEnergy latest: the impact of energy policy changes
Futures Forum: Planning application for solar farms at Clyst St Mary >>> >>> update
Futures Forum: Britain's boom-and-bust in solar power >>> cutting the Feed-in-Tariff and cutting investment in community energy schemes
Futures Forum: Sunshine revolution: the age of solar power
Futures Forum: “Solar energy has a very broad implication. It falls over the entire earth. It’s very decentralized. If energy can be picked up from any point on the Earth, it suggests to you that you don’t need central mechanisms; that you can produce important things at a local level.” Thus “the Sun says ‘freedom.’ ”
Futures Forum: What are the most efficient forms of energy?
.
.
.
Posted by Jeremy Woodward at 15:29

This is all nonsense, created by anti-wind liars. There is a miniscule number of birds harmed by turbines which are far too big and slow moving to pose a threat to fast flying agile birds and bats.
anyway, there are no windfarms in the UK, just clusters. America is the plave where wind farms with thousands of turbines exist, and these probably do pose some risk to slow flying burds like gees and eagles. So best not to site them on migration routes. Windows on the other hand kill millions of birds.

It's a non issue drummed up from time to time by the anti-climate change gang of paid shills and very stupid followers. Best ignored.