Sidmouth: a sense of place

What gives somewhere its own 'sense of place'?
Futures Forum: "Sense of Place" >>> from Bury to Sidmouth

The District Council would call East Devon an 'outstanding place':

The first section looks at a range of issues related to Place, including location and geography, transport, housing and environment. East Devon is a good place to live with a rich natural environment with two thirds of the district being designated as Areas of Outstanding Natural Beauty. We have good transport links including the main airport for the south west region with Exeter International Airport based in the district. We have high levels of car ownership and a large out flow of workers leaving the district to work in places such as Exeter, Mid Devon and South Somerset. Levels of home ownership are high with the highest proportion of houses in the top three most expensive council tax bands.
Affordability of homes is an issue in the district with East Devon being in the top 25% of all Local Authority areas for house prices but one of the lowest nationally in terms of wages. The natural environment also makes East Devon a wonderful place to visit and our natural economy brings significant employment and business opportunity to East Devon.

The TourFish initiative puts 'sense of place' at the centre:

“The Taste of Place: A curious journey to the province of Zeeland in the Netherlands” was led by the Municipality of Middelburg with Dr Gerard van Keken. Place branding is more than just a brand, it deals with culture, distinctiveness, sense of place and history.

Of course, Devon has lots of special places with a clear sense of identity:
BBC - Devon - Wish You Were Here - your favourite place in Devon

Here is a perspective on Sidmouth which still works today:

In 1870-72, John Marius Wilson's Imperial Gazetteer of England and Wales described Sidmouth like this:
... enjoys a remarkably pure and mild but moist and relaxing climate; enjoys also picturesque and romantic environs, replete with objects interesting to loungers, artists, botanists, mineralogists, and geologists...

History of Sidmouth in East Devon | Map and description 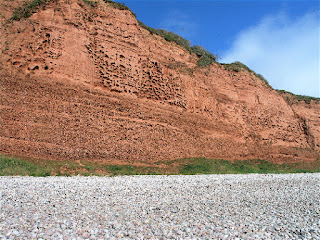 There is always a story to tell, sense to be made out of the places and the land on which we dwell.

And talking of red cliffs:

Finally, from the Telegraph to the Guardian, a sense of place:

Therapy as it used to be

Sunk deep in a deckchair on the sea front at Sidmouth, Devon, I begin to reflect that there are essentially two kinds of English seaside resort: Sidmouth, and all the rest. The rest, of course, have a huge diversity: the high and the low, the grey and the garish, the cosy and the cosmopolitan, the piered and unpiered. But no resort I know gives one quite the same sense that one gets in the sun at Sidmouth that basically all's right with the world.

Illusion, of course; yet somehow within 10 minutes Alastair Campbell and Andrew Gilligan and all their attendant cacophony are fading into the middle distance, and even that spat between Tracey Emin and Philip Hensher seems of little significance.

This therapy is worked in a modest space. The length of the esplanade, running between the red mudstone rocks which close it off at each end like a pair of exotic bookends, is less than a mile. Behind, a thicket of gentle wandering streets stretch back for perhaps half a mile. At the very heart of the town, occupying a site framed by Regency terraces and the parish church of St Giles and St Nicholas, for which I imagine salivating developers might gladly pay Abramovichian sums, are the grounds of the Sidmouth Cricket, Tennis, Croquet and Hockey Club (Visitors Welcome). The cricket, with its attached pavilion, may be the grandest, but the other games too are played with appropriate decorum, their participants all dressed in whites. Sidmouth, they seem to be saying, is a place where we do things properly. That's also the sense with the seafront hotels. In so many other seaside towns outside the premier league, once celebrated hotels with names like the Queen's and the Grand are now mere blocks of apartments. But Sidmouth's are still on parade, and as smartly turned out as ever: the Royal York; the Kingswood, on the site of what was once the hot and cold brine baths; the Bedford, which began as a library; the gorgeous many-balconied Belmont, a private house until 1921; and the heavy, stately Victoria, the only one to be purpose-built, which looks like the sort of place where once you might have expected to meet a man who had recently been on a shooting party with Edward VII.

Small though it is, almost all you'd expect in a self-respecting resort is packed into Sidmouth. A sequence of floreate public gardens, named for the Duke of Connnaught, third son of the Queen-Em press, who opened it in his 85th year; complete with a bandstand where the Ottery St Mary Silver Band were due to play on Tuesday night. The parks and the putting greens, the family picnics, the solid citizens nodding off in their deck chairs (80p per session, £1.40 a day) behind their Daily Telegraphs, the market selling newly caught crabs and lobsters, the little boats with names like White Lightning and Bella, the ice cream parlours where you can choose between Rockbeare rum and raisin and Cotleigh coffee and hazelnut, the lobster pots, the Charles Vance repertory theatre company (17th season) in Crystal Clear, the hysterical holiday comedy by Falkland Cary. There is even the odd opportunity for such old curmudgeons as might visit to complain that even Sidmouth is not what it was: no elderly men reading the Daily Mail in their deck chairs with improvised hats made of handkerchiefs; no men, fully dressed except for socks and shoes, with their trousers rolled up, paddling at the very edge of the water. But miraculously Fields, Sidmouth's department store, founded 1809, which boasts on its shopping bags of "service as it used to be" is still there, not absorbed into Debenhams, or carved up, as such old family businesses often are, into burger restaurants and card shops.

Though Sidmouth doesn't flaunt its self-restraint, in the manner of Frinton, there's nothing garish or strident, except perhaps for the early afternoon sun. Yet I've long had a sense of guilt about finding it so endearing. Isn't it just that little bit smug and self-satisfied? (There is even one street in the town named Elysian Fields). Could it not be, for some people's tastes, unforgiveably middle class? That John Betjeman should have adored it may alone be enough alone to condemn it now in the eyes of progressive people. But since the death of Roy Jenkins I have put aside my doubts on this score. In a tribute in the Telegraph, the novelist Robert Harris said the great man had recalled for him a chance encounter on the esplanade at Sidmouth with the famously rough and ready Transport and General Workers Union leader and subsequent Labour foreign secretary, Ernest Bevin. "I'm 'ere on 'oliday with Flo," Bevin had told him. If Sidmouth, even as it was then, was Bevin's resort of choice, then all accusations of snootiness are hereby struck from the record.

Therapy as it used to be | Guardian daily comment | guardian.co.uk
.
.
.
Posted by Jeremy Woodward at 15:58