Knowle relocation project: SAVE Britain's Heritage >>> "The loss of the Knowle and the additional development of the park’s upper lawns and car park as proposed represent a devastating blow to the history and character of Sidmouth."

The Express & Echo carries the story in its latest edition on its front page:

With the piece available on-line - together with a graphic depiction of the impact of the proposed development: 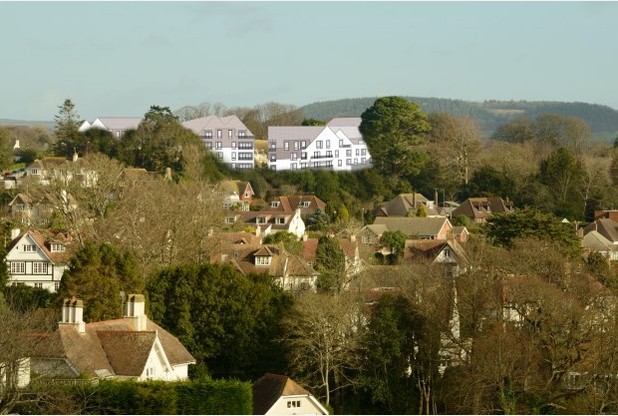 Campaign group Save Britain’s Heritage has objected to plans to demolish the 19th-century council offices and build on the Knowle Park in Sidmouth.
East Devon District Council has agreed to sell its Knowle headquarters to Pegasus Life Ltd, which specialises in providing living and care facilities for older people.
The sale is subject to a successful planning application which is due to be considered the authority’s development management committee in July.
Pegasus Life is proposing to build 115 one and two-bed homes for older people on the site, along with staff accommodation and facilities including a wellness suite, restaurant, residents’ lounge, cinema and function room, an orangery and public garden.
The council has agreed that 86 per cent – some 3.5 hectares – of the parkland at Knowle will be offered to Sidmouth Town Council to own and manage in perpetuity with a covenant over future development of this land.
Pegasus Life submitted its plans for the Knowle to East Devon District Council in March. Consultation on the planning application closes on Wednesday, June 15.
In the group’s submission to the council’s planning department, Liz Fuller, buildings at risk officer for Save Britain’s Heritage, said: “The Knowle is an important local landmark building in Sidmouth standing in attractive landscaped grounds.
“In our view, the loss of the Knowle and the additional development of the park’s upper lawns and car park as proposed represent a devastating blow to the history and character of Sidmouth, a remarkably well-preserved Regency town in a beautiful setting on the Jurassic coast.
“The long-term benefits of retaining this building should be properly considered as it would serve to secure an important local landmark.”
She added: “The Knowle, which dates back to 1810, has played an important part in the history of Sidmouth and the lives of its residents and visitors.
“The consequences of the loss of this building and the extensive development proposed will impact significantly on the site and the surrounding area which comprise two conservation areas.
“In particular, the proposed development of 115 new homes constitutes clear over-development of the site; the East Devon Local Plan only recommends 50 homes on this site.”
The campaign group concludes by urging East Devon District Council to reject the application and “require a revised design for the site that preserves the historic buildings and better protects the character of the park which is such an important amenity for the community and wider public”.
Pegasus Life has said its plans will help to meet Sidmouth’s housing need, adding that it has reduced the amount of proposed accommodation in response to comments from local residents at a consultation event in November last year.
The company said: “In its draft Local Plan, East Devon District Council has allocated 50 new homes for the site. This allocation was not based on any detailed study of the capacity of the site to accommodate new housing.
“We are proposing 115 apartments. One and two-bed apartments are much smaller than a typical house, therefore they take up much less space than a typical home.
“We have also ensured that our proposed buildings are carefully located on parts of the site that are currently developed. This means our buildings will fit in to the landscape and allow us to retain the important trees and open spaces in the parkland.”
East Devon District Council decided to relocate its headquarters in March last year.
The council will move out of its current premises in Sidmouth to purpose built offices in Honiton and to Exmouth Town Hall, which will be refurbished.
The relocation to Exmouth is due to take place during the latter part of next year, with relocation to the new purpose built offices in Honiton to follow by spring 2018.

Save Britain’s Heritage objects to plans for 115 retirement apartments at the Knowle in Sidmouth | Exeter Express and Echo
.
.
.
Posted by Jeremy Woodward at 01:00