Britain’s new environment and farming minister is a master of the political dark arts.

As a leading proponent of quitting the EU, Michael Gove will now have to sell Brexit to some of the country's most prickly political constituencies

As a leading proponent of leaving the EU, Michael Gove now has the job of selling Brexit to some of the U.K.’s prickliest constituencies: farmers and environmentalists.

Appointed to one of the most toxic jobs in Prime Minister Theresa May’s cabinet — environment and agriculture minister — the 49-year-old Scot will need all the skills that earned him a reputation as one of the Conservative Party’s wiliest operators.

As head of the sprawling Department for Environment, Food and Rural Affairs, he will have to chart a shake-up of the country’s model of agricultural subsidies after the EU’s Common Agricultural Policy ceases to apply. George Eustice, Gove’s junior minister, has already suggested that big subsidies based on acreage will have to be phased out.

In addition to taking an ax to farm payments, green groups fear that environmental regulation will also be for the chop. Gove has already been clear about his distaste for some of the EU’s environmental rules.

Farmers are themselves rather pessimistic:
English farmers downbeat on Brexit ‘despite voting leave’ - Agriland

As for the sellers of UK farm produce, Lidl's advertising at its Sidmouth supermarket stresses that its strawberries are 'British': 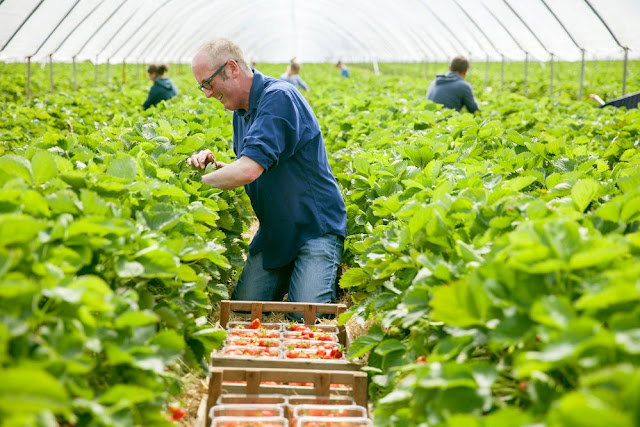 Restricting access to migrant workers once the UK leaves the EU would negatively impact the profitability, efficiency and viability of more than half of rural businesses, according a new survey by the CLA.
Revealing the results at the South of England Show today (8 June), the CLA which represents landowners, farmers and rural businesses said Brexit had already caused problems for rural employers, with 44% of CLA members surveyed saying they had experienced a reduction in the availability of migrant labour over the past year. Almost 90% of respondents tried to recruit locally but the majority found it difficult to fill positions with British workers.
One in ten CLA members employ migrant workers in managerial positions, with almost a quarter of respondents saying they worked in skilled roles, such as training horses or operating complex machinery. The survey revealed that although overseas labour peaks during harvest months, workers are employed all year round within rural businesses.
CLA Senior Economics Adviser Dr Charles Trotman said: “Our survey shows that rural businesses employ thousands of migrant workers who are vital to the rural economy. Most CLA members employ fewer than 10 migrant workers per business although others employ many more.
“The Government must provide certainty that after Brexit there will still be a flexible, skilled and secure workforce in order for rural businesses to plan for the future. To support the already acute shortage of labour a new seasonal agricultural workers scheme must be introduced immediately, not after the UK has left the EU and the Government must also confirm the status of EU migrant workers in sectors such as food processing, horticulture and tourism already resident in the UK.”
Marion Regan, Managing Director of soft fruit growers Hugh Lowe Farms in Kent said: ‘Like all growers of fantastic fresh British produce, we rely on a sustainable seasonal workforce to grow and harvest our fruit. I am confident that we will continue to have great people from other countries helping us with our harvest if the Government understands the importance of reintroducing a Seasonal Agricultural Workers Scheme.”
To see the results, click here
Access to migrant workers vital to more than half of rural businesses | CLA
.
.
.
Posted by Jeremy Woodward at 01:00