Plans for Port Royal: the dangers of turning a 'remarkable opportunity' into an 'embarrassment'

The consultants for the Port Royal Scoping Study have put together a 'concept idea' for Eastern Town - to be considered by residents later this month:
Futures Forum: Plans for Port Royal: anticipating a Regeneration Board >> "Initial concept proposals for Sidmouth’s Port Royal available to view at consultation days later this month >> Come along and have your say at Kennaway House on June 26 and 27"

It is hoped that the high expectations and grand designs will not end up in the way this showcase development has:

'An embarrassment to the city': what went wrong with the £725m gateway to Cambridge?

Initially planned by Richard Rogers, CB1 was to be a world-class arrival point, with park, piazza, heritage centre and affordable homes. Instead, it’s ‘a future slum’ plagued by antisocial behaviour and sex-trafficking 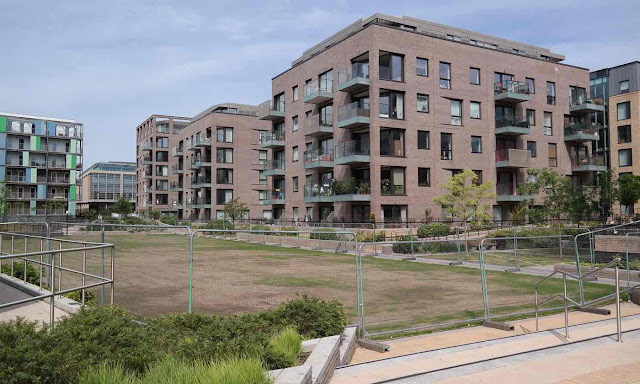 “A remarkable opportunity,” is how architect Richard Rogers described his £725m vision to design an entirely new gateway to Cambridge. Twelve years on, the result has been called “rubbish”, “unfit” and “soulless” by local residents, not to mention being accused of “designing in crime”, after a rise in antisocial behaviour and a wave of “pop-up brothels”.
Visitors arriving by train are now greeted with a generic clone-town scene more like a suburban retail park than an illustrious seat of learning. Reconstituted stone fins line the front of a broad, bland office building, presenting a beige frontage of Pret, Costa and Wasabi outlets to the new station square. The insipid facade of a squat Ibis hotel frames its other side, looking on to a public space seemingly designed more with cars than people in mind. For somewhere that markets itself as “the best small city in the world”, it is a disappointing welcome.
“It’s such a wasted opportunity,” says local resident and community activist Sam Davies. “We were promised a world-class development and a wonderful new public piazza, but we’ve ended up with identikit blocks set around a choked taxi rank. It’s an embarrassment to the city.”
A long slab of student flats stretches to the south along the railway line, next to a row of four brick apartment blocks looking on to a small lawn, which has been fenced off for the last two years, following a spate of problems. As the only open space provided for the joint use of the 1,000 student apartments and 350 homes – many occupied by young families – it became a contested spot, a single patch of grass catering to small children and student football matches, a place of late-night music and, according to a council report, dope-smoking until the early hours.

'An embarrassment to the city': what went wrong with the £725m gateway to Cambridge? | Art and design | The Guardian
.
.
.
Posted by Jeremy Woodward at 12:10