A new collection system is rolling out across these parts tomorrow:
Futures Forum: Recycling and refuse in East Devon >>> collecting more to recycle more >>> from 12th June

And the press are keenly reporting the event:
All you need to know about recycling changes for 50,000 East Devon homes that starts tomorrow | Devon Live 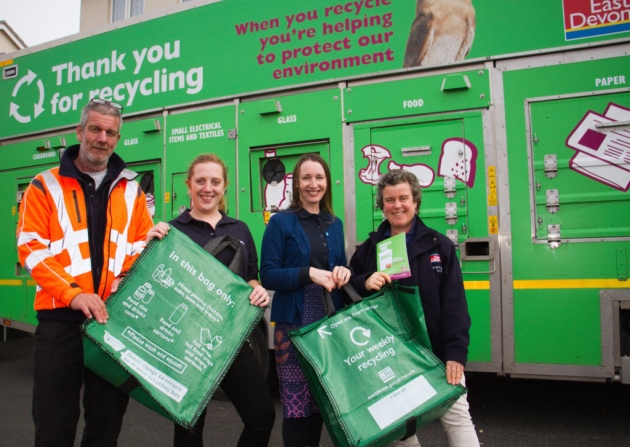 A new recycling service is being rolled out across East Devon next week from Monday, June 12.

Residents are now being reminded to refer to the information they have been sent by East Devon District Council, to ensure they are aware of their collection days, what they can recycle and how to separate the items between their box and new sack.
Cardboard, plastics, cartons and small electrical goods have been added to the number of items that residents can currently recycle, which includes food waste, paper, glass bottles and jars, tins and cans, textiles, shoes, foil and batteries.
More than 50,000 households have received a new green sack or container in which to collect their extra recyclables.
The new service, which has already started in Exmouth, means that all residents will be able to recycle more items than ever before and these will be collected every week from the kerbside.
As householders will be able to recycle more and throw away less bulky rubbish, grey wheeled waste bins will be collected every three weeks.
Almost 17,000 households in Exmouth started to use the new service in mid-February in the first phase of the roll-out.
Within the first nine weeks of the new service, residents were recycling almost 60 per cent of their waste – an increase in recycling of 15 per cent.
Mark Williams, EDDC’s chief executive, said: “Our message to our residents is that we’re here to help you through these changes and we hope that you have all the information you need.
“If you don’t, then please contact our dedicated team of recycling officers, who will be happy to advise you and can also come and meet you to try to help resolve any issues you may have.
“The new service will make it easier for our residents to recycle more and in order for us to achieve this we have had to make some major changes to our usual collection routes. This has meant some day and week changes to collections for some of our residents which may take a while to get used to.”
East Devon’s new recycling scheme is all set to be rolled out - Breaking news & sport in Devon | Midweek Herald
.
.
.
Posted by Jeremy Woodward at 14:34