Monterey Pines in the Sid Valley

The Sid Valley has some rather imposing Monterey Pines: 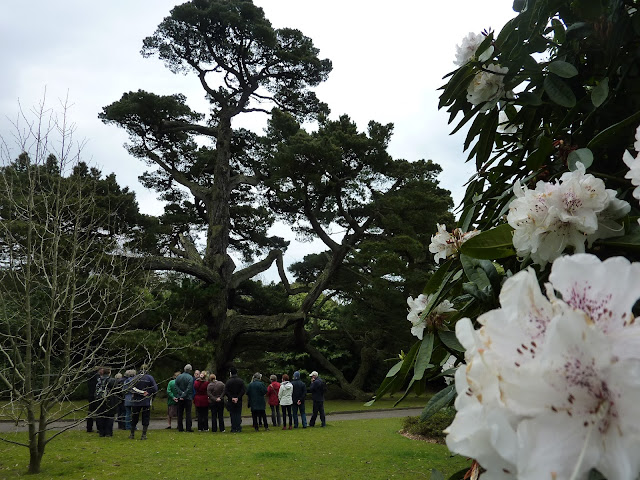 Everyone knows ‘Old Monty’ (with the thickest girth of its type in the UK) but may not know how to be sure it’s a Monterey Pine. Look for fist-sized cones growing directly from the bark.

There are also some new-comers: 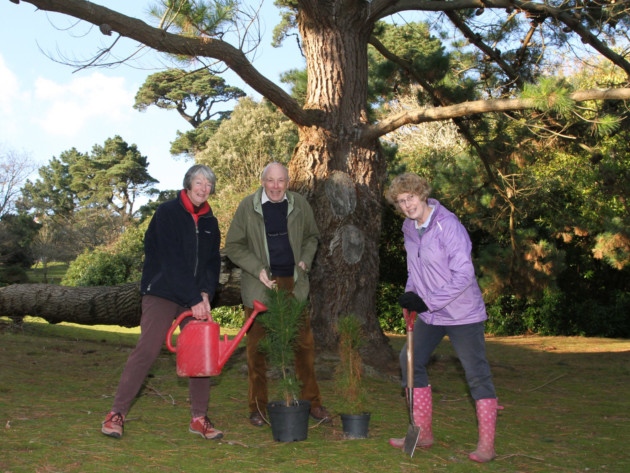 Sidmouth Arboretum's Diana East with local residents Martin McInerney and Sue Dent with two young Monterey pines that will be planted at Knowle in Sidmouth. They are pictured in front of one of the iconic Monterey pines believed to be around 150 years old and growing in the grounds of Knowle

There is a rather sad story about a threatened tree in the centre of Sidmouth - with several issues:

One of the historic curiosities of Sidmouth is that the parish of Salcombe Regis to the south of Salcombe Road includes bits and pieces on the west side of the River Sid.  There have been several disputes over land over the last two centuries, much to do with milling rights.

The land on which this particular tree sits was called Sidling Field and was an orchard. As so often happens, when Millfield Road was developed , the ownership of this sliver of ground was not transferred to anyone, and so is now ‘no man’s land’.   There are hundreds of similar examples all over Sidmouth.

The Arboretum has been contacted and comments that it is indeed a Monterey Pine.

It seems that the trimming of the tree was to keep overhead cables free - and this has caused much of the considerable listing.

Meanwhile, it is understood that Cllr Stuart Hughes has been in touch with the Environment Agency who may well be responsible; and Cllr David Barrett has visited the complainant and commissioned a visit from the District Council's arboriculturalist.

Here is the report from the Herald: 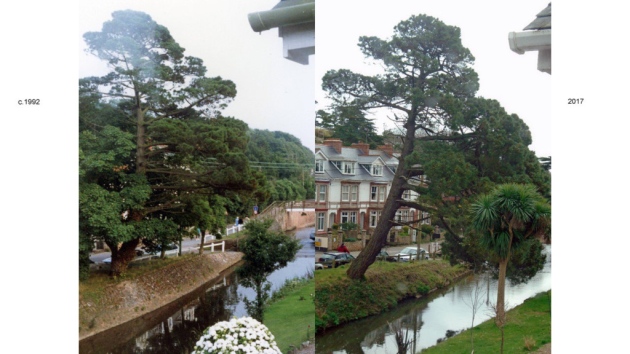 A century-old tree that threatens to block the River Sid and cause considerable damage to several homes could be removed with the necessary consent.

No one owns the strip of land where the Monterey pine is now listing at a steep angle over the water so residents are seeking reassurance.
It appears too heavy to be propped up and may need to be felled but Sidmouth Arboretum said it could be replaced with another that is being grown from seed.
Barrington Mead resident Julian King said: “When the tree does topple, over, the branches will block the River Sid like a dam and potentially put all 10 houses in Barrington Mead at the risk of flooding, and also some of those in Millfield Road. The tree roots would almost certainly disturb the bank and Millfield Road itself.”
He claimed that the pine has started leaning in recent years because it had only been pruned on one side to prevent damage to telephone cables.
Councillor Stuart Hughes said East Devon District Council (EDDC) had been contacted and its tree expert is set to investigate.
Cllr Cathy Gardner said she hoped it could be propped up as it would be ‘such a loss’ to that part of the river, but Sidmouth Arboretum president Diana East said it is probably too weighty for that to work. She added that work was done on other trees in the area in 2014, when the pine was considered safe.
“We’ve since had very dry weather and very wet weather,” said Mrs East. “It needs to be looked at again by tree experts. The pine is reaching maturity. The arboretum view is that trees have a lifespan. Branches will fall off or they will fall over – if it fell it would fall on the houses.”
She said it would be up to Sidmouth Town Council and EDDC to consider a planning application to remove the tree as it is in a conservation area, and it would be a costly operation – but Sidmouth Arboretum could fund its replacement with another Monterey pine that has been grown from seed.