These were also the grounds for refusing planning permission to housing in Sidford only this week:
13/2549/OUT | Demolition of existing buildings and construction of 5no. dwellings with associated access and garages (outline application with all matters reserved) | 1 Laundry Lane (land Adj Mill House) Sidford Sidmouth EX10 9QR

But another issue has been employment land.

On the one hand, there has been much opposition to the large 'business park' at Sidford:
Futures Forum: Developing the Sidford employment site: "A Local Plan is not set in stone. It can adapt to ‘material changes’."
Futures Forum: Seven alternative options to develop Sidford's AONB

Whilst planners need to be 'more nuanced' over these decisions...
Futures Forum: "Regeneration and economic development" in East Devon >>> looking beyond the conventional, the ideological and the heavyhanded

... a very interesting decision was made this week by the District Council's planning committee - where concerns about exactly these issues were raised:


Five-house bid in Sidford refused due to flood risk 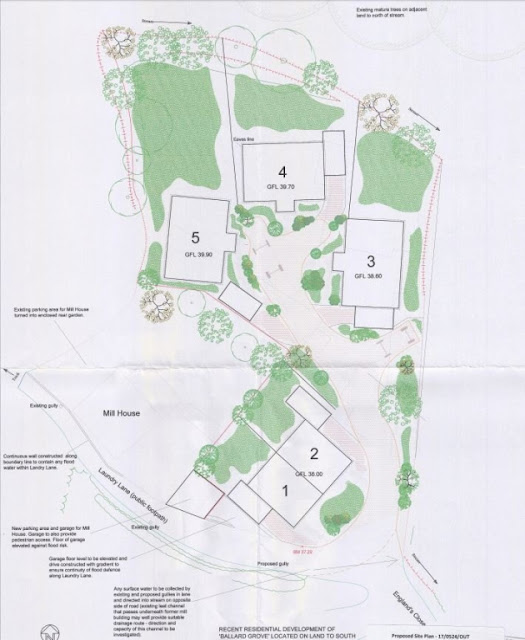 The site plan for Laundry Lane

Plans to demolish industrial buildings in Sidford and construct five homes have been refused due to the risk of flooding.

Members of East Devon District Council’s development management committee (DMC) also said there is healthy demand for small employment units and the applicant had not marketed the Laundry Lane site as a whole.
The outline application was to build a pair of three or four-bedroom semi-detached homes in place of the old sail laundry and the associated workshops, plus three larger detached four or five-bed houses, with associated parking.
It said there was ‘no genuine risk’ of flooding and agent Martin Lee told Monday’s meeting that the categorisation as flood zone three – the highest level – followed a single incident in 1968 that was caused by a blockage.
Planning rules state that sites at risk of flooding should only be developed if there is no alternative in a given area. The meeting heard that the site could be redeveloped for employment even if housing was not allowed, as the flood risk is more acceptable for business premises.
The application said the ‘dilapidated’ industrial buildings did not sell despite ‘continual marketing’ but DMC members said there may have been interest in the site as a whole.
Committee chairman Mike Howe said the site is not wholly brownfield and some of it is currently undeveloped.
There were 11 letters supporting the application saying the character of the area has changed from when the old sail laundry was active and it is now a residential neighbourhood. Sidmouth Town Council also supported the application.
Councillor David Barratt, the ward member, called for a site visit so his colleagues could properly appreciate its constraints, adding: “In no way is the road suited to industrial use any more.”
Cllr David Key said: “Previous applications for this site have been refused because it’s in flood zone three. I don’t see how a site visit is going to make any difference.”
Cllr Mark Williamson added: “We are desperately short of small-scale employment sites across East Devon and here we are taking one away, potentially. It needs to be properly marketed.”
Members voted to refuse planning permission.