Somebody seems to have had enough: 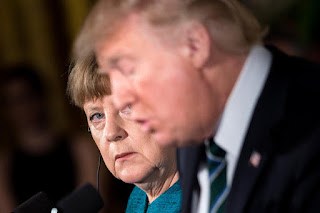 On Wednesday, at around the time that news outlets were reporting that President Donald Trump had decided to pull America out of the Paris climate accord, the German Chancellor, Angela Merkel, was at the Berlin airport, greeting Premier Li Keqiang, of China. As their national anthems played, Li and Merkel stood on a red carpet that had been cut to look like a giant arrow. It seemed to point definitively away from Trump. There was a connection between the two moments that was more than symbolic. China has made it clear that, with America’s abdication, it sees Paris as a vehicle for its efforts to assert itself as a leader of the international community. (Whether this means that it would also make sure that carbon emissions fell is another matter.) And Merkel, during the past few days, seemed to have had it with Trump, in some significant measure because of his flashy contempt for the climate deal and for his fellow world leaders.

That contempt was well on display on Thursday afternoon, when Trump confirmed America’s withdrawal from the Paris Agreement. In his remarks, delivered in the Rose Garden, Trump attacked not only the terms of the deal but also the goodwill of those who argued for it. He spoke like a man unravelling a conspiracy or a con job. The climate accord had been pushed by America’s economic rivals, whose real reason for wanting us to stay in was “so that we continue to suffer this self-inflicted major economic wound,” and by “global activists that have long sought to gain wealth at our country’s expense.” Paris was just a “scheme to redistribute wealth outside of the United States.” Only Trump really cared about the environment, and he would get a much better deal for it.

The American people seem to feel rather differently: 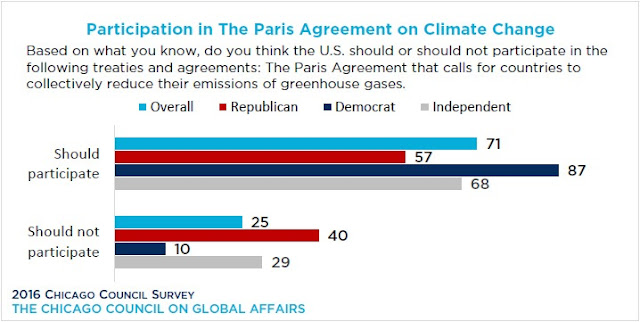 Trump wants to dump the Paris climate deal, but 71 percent of Americans support it, survey finds - The Washington Post

By a twist of Irony that will have passed him by, Trump announced the US’s withdrawal from the Paris Climate accord just a few days before Monday’s World Environment Day. #WorldEnvironmentDay. Still we keep trying and at least Trump’s lunacy will serve as a catalyst for those inside and outside the US who have, until now, been sitting on the fence

It's an annual event, promoted by the UN:

World Environment Day – which is observed on 5 June every year across the globe – is the largest annual event for positive environmental action. 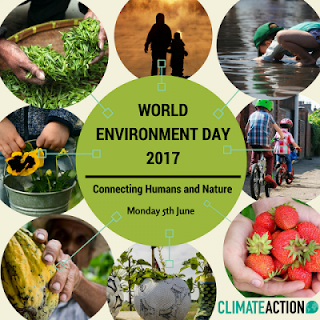 World Environment Day was inaugurated in 1972 following the United Nations Conference on the Human Environment in Stockholm, Sweden on 5-16 June – the first international conference on environmental issues.
Since its first celebration on 5 June 1974, millions of people across the world have taken part in thousands of events to raise awareness and generate political momentum around growing concerns such as the depletion of the ozone layer, toxic chemicals, desertification and global warming.
Events range from neighbourhood clean-ups, to action against wildlife crime, to replanting forests.
The Day has developed into a global platform for taking action on urgent environmental issues, driving change in our consumption habits as well as influencing national and international policy.
The host country for this year’s celebration is Canada, succeeding 2016 host Angola.
Canada has chosen the theme “Connecting People to Nature” for 2017, which invites people to enjoy the outdoors and to take forward the call to protect the Earth that we share.
World Environment Day 2017: Connecting People to Nature - Climate Action Programme
World Environment Day

Here's a nice piece with a UK perspective:
World Environment Day: Why nature is a co-operative issue - Co-operative News
.
.
.
Posted by Jeremy Woodward at 01:00

Thanks for giving great kind of information. So useful and practical for me. Thanks for your excellent blog, nice work keep it up thanks for sharing the knowledge.
Best Interior Designer in Noida

I feel happy about and learning more about this topic. keep sharing your information regularly for my future reference. This content creates a new hope and inspiration with in me. Thanks for sharing article like this. the information which you have provided is better then other blog.
Best IELTS training centre in Dwarka Delhi

Usually I never comment on blogs but your article is so convincing that I never stop myself to say something about it. You’re doing a great job Man,Keep it up.
canada education consultants in delhi

It is really nice to see such websites having such quality information.

wonderful article contains lot of valuable information. Very interesting to read this article.I would like to thank you for the efforts you had made for writing this awesome article.
This article resolved my all queries.good luck an best wishes to the team members.continue posting.learn digital marketing use these following link
Digital Marketing Course in Chennai