Regenerating Exmouth seafront: and Wildlife Refuges on the River Exe

Which is all part of the District Council's grand plans for 'regeneration':
Regeneration projects in Exmouth - East Devon
Futures Forum: Regenerating Exmouth seafront: "the council have not done anything to progress the development of the site"

On the other hand, there seem to be different plans for Exmouth's waterfront: 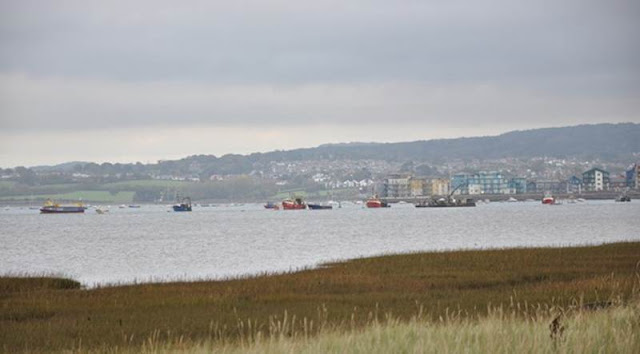 Proposals for Wildlife Refuges in the Exe Estuary have been approved by Councillors from three local authorities bordering the Estuary at a meeting of the South East Devon Habitat Regulations Executive Committee.

Councillors from local authorities surrounding the Exe Estuary approved proposals for Wildlife Refuges at a meeting of the South East Devon Habitat Regulations Executive Committee yesterday (23rd October 2017).
Following a comprehensive 9 month consultation, views including concerns about safety, from residents and the wide range of Exe Estuary users were taken into account in developing the voluntary areas.
Preparations to help people learn about the areas will now begin. Next year, the Wildlife Refuges will be marked by buoys and an education programme will include new signs, leaflets and in person from the Habitat Mitigation Officers who work on and around the Estuary. The areas will be monitored to see how effective they are at reducing disturbance to wildlife.
Exeter City Council’s Lead Councillor for City Development, Cllr Daniel Gottschalk, is chair of the committee. He said:


On behalf of all the members of the Committee, we would like to thank everyone who collaborated and helped develop these safe areas for birds to rest and feed. Some of these birds have travelled thousands of miles before coming to rest in the Exe Estuary and disturbing them can be life threatening because using scarce energy can reduce their ability to survive.

We are now calling on the wide range of Estuary users for their co-operation and support as we ask them to avoid a very small part of the Exe Estuary - all year round at Dawlish Warren’s refuge and from mid-September to end of December at Exmouth’s refuge.

The East Devon Watch blog points to an obvious question:

25 OCT 2017
Will this affect the watersports centre and, if so, will EDDC effect a covenant on its land to allow for it?
“… The Exmouth site covers an area on the east side of the River Exe, running from a point west of Exmouth Leisure Centre up to a point west of Lympstone Manor. …
“We are now calling on the wide range of Estuary users for their co-operation and support as we ask them to avoid a very small part of the Exe Estuary – all year round at Dawlish Warren’s refuge and from mid-September to end of December at Exmouth’s refuge.”
The refuges are part of the Exe Estuary Special Protection Area, which regularly provides space for 20,000 birds to rest and feed.
East Devon District Council, Teignbridge District Council and Exeter City Council must legally prevent disturbance to birds and deterioration of their habitats [though this may or may not continue after Brexit when the UK is freed from EU regulations].”
http://www.exmouthjournal.co.uk/news/wildlife-refuges-given-green-light-in-exmouth-and-dawlish-warren-1-5249723
Wildlife refuges on River Exe agreed – will it affect water sports? | East Devon Watch

Meanwhile, there is the promise of 'regeneration' for Sidmouth:
Regeneration projects in Sidmouth - East Devon

And a comparison with events in Exmouth does not bode well:
Futures Forum: Plans for Port Royal: anticipating a Regeneration Board >> and plans for Exmouth: When "nothing's been decided" means "something's been decided"
.
.
.
Posted by Jeremy Woodward at 14:19