Brexit: and Exeter's MP's demanding that the government 'comes clean'

On Friday he provided this comment on the latest developments:


Speaking to openDemocracy today, Labour MP Ben Bradshaw said: “We have seen this week the extent to which Cambridge Analytica sought to distort and manipulate the democratic process around the world."

"Now we learn that a major shareholder in the company that created Cambridge Analytica is directly connected to a senior pro-Brexit Northern Irish unionist – who is himself linked to some of Vladimir Putin’s associates. This poses serious questions about who is funding our politics and how."

“The Tories are being propped up by a party which refuses to say where it got a £435,000 Brexit donation. If the DUP won't come clean about these questions, the government should make them."

Is there a link between Cambridge Analytica and the DUP’s secret Brexit donors? | openDemocracy

Today, he called for the sacking of the Prime Minister's aide over the latest scandal:

On Saturday, he had spoken at a rally in Exeter:
'March for Europe' to demand a vote on Brexit deal | CommonSpace
The South West March & Rally for Europe
Photographs from the marches against Brexit across Britain | Latest Brexit news and top stories - The New European
Thousands march against Brexit last weekend | News | Teignmouth Post

There was some tweeting to be had:
Katie Hopkins and Exeter MP Ben Bradshaw in Twitter spat over Brexit marches - Devon Live

And a provocative banner: 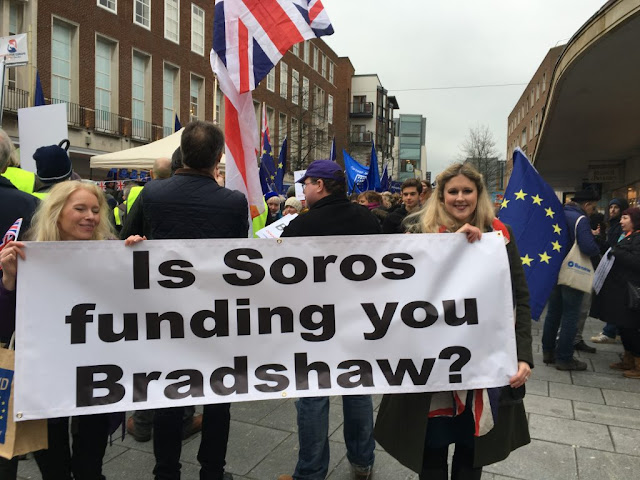 We now have a much clearer idea of the dubious forces behind the Brexit campaign – an alliance of far-right ideologues, climate change deniers, tax-dodging foreign billionaires and specialists in voter manipulation. Details about this unholy alliance can be found on my Bad Boys of Brexit website.

With a piece published today:

The allegations of illegal behaviour and electoral manipulation swirling around the EU referendum have become complex.

The allegations fall under three main headings:
> Theft of data from Facebook to enable creation of individual voter profiles
> Micro-targeting with fear-based messages and military-informed psyops
> Breach of spending limits

Facebook allowed Cambridge academic Aleksandr Kogan to use a personality questionnaire delivered via an app to harvest personal data of 50 million Facebook users. He claimed it was for research use only but passed the data onto Cambridge Analytica. When Facebook discovered the breach in 2015 they failed to alert users and took only limited steps to recover and secure the private information of more than 50 million individuals.

Whistleblower, Christopher Wylie, who worked with Kogan to obtain the data, explains how Cambridge Analytica used this information to build profiles and algorithms for social media micro-targeting, designing messages specifically to respond to voters ‘inner demons’.

The use of psychologically driven propaganda

Expertise in psychographics – the use of personal data to enable micro-targeting of messages – is the main selling point of Cambridge Analytica, a subsidiary of SCL Elections (formerly known as Strategic Communications Laboratories). This company has a disturbing track-record of being employed to undertake brainwashing (more technically known as Psyops) for the military and security services and undermine free and fair elections in a number of countries. It has also emerged that the UK government has had six contracts in the past with the SCL Group.

In the lead-up to the Brexit refrendum, the law limited spending by the official campaign on each side to £7m. Other independent campaigns could spend up to £700,000. Campaigns had to keep funding separate and were legally prohibited from cooperating over strategy or tactics or sharing personnel.

What we now know is that Vote Leave channelled a £625,000 “donation” to Aggregate IQ (AIQ) via BeLeave, which was not fully independent from Vote Leave. AggregateIQ was hired by Vote Leave and shares close ties to Cambridge Analytica, both subsidiaries of SCL Elections. This makes the use of closely related firms AIQ and CA extremely dubious.

Before these recent revelations we knew that these two companies were closely linked through their history, their personnel and through ownership of their Intellectual Property by the Canadian hedge-fund billionaire Robert Mercer. The smoking gun though, confirming the close relationship, is a shared Google drive. Victoria Woodcock, the operations director for Vote Leave, deleted herself, campaign director Dominic Cummings and Vote Leave’s digital director, Henry de Zoete, from dozens of files on the drive Vote Leave shared with BeLeave to hide the fact of co-ordination following the launch of an investigation by the Electoral Commission.

The links between Vote Leave and BeLeave as revealed by whistleblower Shahmir Sanni demonstrate prime facie evidence of illegal activity. In total, AggregateIQ received £3.9m by Leave campaigners, a full 10% of all the money spent by both sides. It is a very small company working out of a tiny office in Victoria, Canada. Christopher Wylie, who helped set up both Cambridge Analytica and AggregateIQ, explains that the connection to Cambridge Analytica was a personal one – he is also from Victoria – and the company had no online presence when it began working for the Vote Leave campaign.

This scandal goes to the highest levels of government, as cabinet ministers Michael Gove and Boris Johnson fronted the Vote Leave campaign.

So, in summary, Vote Leave spent more than 50% of its official campaign budget on the activity of AggregateIQ, whose services were also used by BeLeave, Veterans for Britain and the Democratic Unionist Party. In addition, AIQ has ties to SCL Elections and CA, whose expertise is in distorting electoral processes. There is also strong evidence that spending limits were broken. This suggests that the narrow victory for the Leave side is not robust and greatly strengthens our case for a people’s poll on the final deal.