Plans for Port Royal: national support for the Drill Hall

There are all sorts of things which can be done with an old drill hall:
Futures Forum: Plans for Port Royal: the art of restoring Drill Halls: part 2

Looking at this fine specimen - which has not changed much since 1913 - anything's possible: 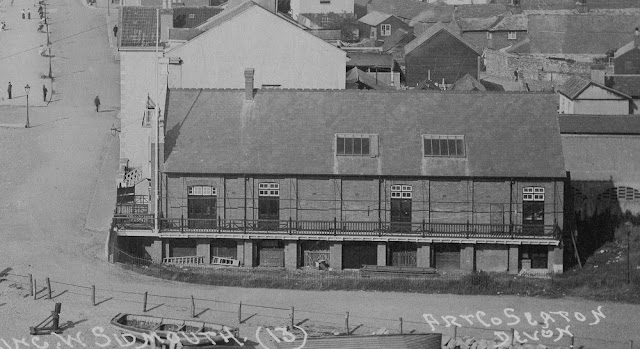 Here's a report on who is behind the campaign to do something with the current building:

Who supports the campaign?

The most important people who support the campaign are those who live in or regularly visit Sidmouth, but East Devon District Council has a track record for rejecting the views of such people as being uninformed; they also tend to label them with ‘bad’ motives of some description in order further belittle them.

So, in order to be taken seriously we need to look for experts of some sort outside the town. The people who were experts in their fields before they came to Sidmouth have obviously had to surrender their expertise in order to be accepted.


People and organisations who have expressed a belief that the Drill hall should be retained.

Historic England, who say it is an asset to the Conservation Area.

He says: "The hall is undoubtedly an important building, not only for its potential social uses but also because of its historic fabric. In particular, it has a wonderful hammerbeam roof. Jerman produced a number of fine roofs of this sort, with iron tie rods, turned pendants and other elaborate details. I particularly remember the roof of the great hall at the Episcopal School for girls in Pennsylvania Road, Exeter, which I use to admire before it was destroyed in a terrible fire in about 1979. These kind of roofs are increasingly rare and this is a very fine example, referencing 14th and 15th-century roofs such as Westminster Hall and the Law library in Exeter in the form of its hammerbeams."

The New Economics Foundation: it used the Hall as one of only 4 regeneration choices when it bid for Lottery funding through the Blue New Deal , unfortunately the bid was not successful.

Jericho Road, Jess Steele OBE has expressed her opinion to Matt Booth that retaining the Drill Hall is a project which would work.

Organisations which believe that Drill Halls in general are important are

Who supports the campaign? - Sidmouth Drill Hall Rescue
.
.
.
Posted by Jeremy Woodward at 16:24