There have been demonstrations over closing community hospitals:
Futures Forum: Protest rally in Exeter over hospital closures across Devon > further reports

Tomorrow, there will be a demonstration over the integration of health care in Devon:
Our NHS: Demo at DCC HQ Thursday 22 March from mid-day | East Devon Watch

DEVON TO DESCEND ON COUNTY HALL,
Thurs 22nd March at 12.00DCC are determined to quietly force through their ICS plans PRIOR to Parliamentary Scrutiny, TWO JUDICIAL Reviews and CORNWALL REJECTING the whole idea!

We are opposing the attempt to introduce an ICS by demonstrating at County Hall in Exeter on this Thursday 22nd June at 12 noon, and you may also like to attend1) The CCG board meeting at 1pm where they will try to press on with plans 2) The Adult Health and Well-being Scrutiny committee at 2.15pm where there are some councillors who plan to approve the ICS3) Another action will also be taking place on Thursday morning, before the county hall event. This is an independent action not associated with SOHS Devon, but is also designed to put pressure on decision makers who are destroying our NHS. Your presence would be most warmly welcomed. If you would like to join in this action e mail me at johnwardman@hotmail.com

But nobody seems to understand what's being offered:
New Devon care system agreed even though 'no-one understands it' - Devon Live 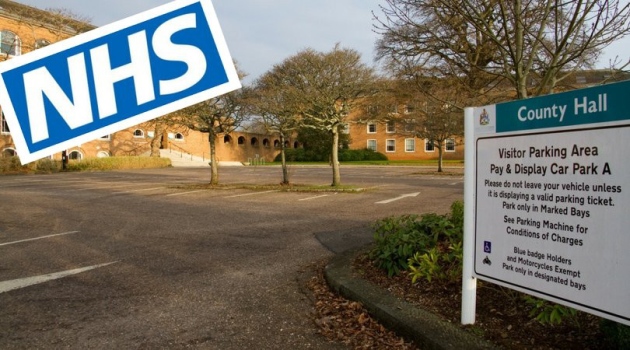 A row over a proposed new system of merging health and social care for Devon is set to break out at County Hall tomorrow (Thursday).

An integrated care system (ICS) is supposed to start in the county on April 1, brought in by North, East and West Devon Clinical Commissioning Group (NEW Devon CCG) and Devon County Council. The idea behind it is for the NHS and social care providers to work together to provide better ‘joined up’ health care for patients.
But there are fears for what the new system will mean, with opponents saying there has been no information about ICS – formerly known as accountable care systems (ACSs) – and no public consultation.
Liberal Democrat county councillors have called it in to an emergency meeting of the council’s health scrutiny committee tomorrow after it appeared the DCC cabinet would pass it.
They will put their questions to a CCG representative who will be at the meeting, together with members of Save Our Hospital Services who are travelling to Exeter by coach to add their voices.
Barnstaple county councillor Brian Greenslade said they had been ‘starved of information’ about the plans and there had been no time to properly scrutinise them.
He added: “I am troubled by the way this project appears to being rushed through the council. The principle of integrated health and social care is something that I can endorse. However the way opposition councillors have been starved of information is of concern.”
Nationally there are fears proposed ACOs (accountable care organisations) that hold budgets for a population, could lead to an American style health system or privatisation.
SOHS campaigners fear the same for Devon, with an ICS system being brought in without consultation.
But a statement on the CCG website says it is ‘when organisations work together in a shared way; sharing budgets, staff, resources where appropriate, to best meet people’s needs. ‘What it’s not is a creation of a new organisation or ‘privatisation by the back door’.
Spokesperson Sue Matthews said: “ICSs will still have to operate under the conditions of austerity and cost-cutting, but the public have not been given a clue about their legal structure and obligations, about leadership or about how the funding system might work. From what we do know, it is beginning to look as if they could be run along the lines of a private business, protected from public scrutiny and without the accountability to central government which has been a cornerstone of the NHS.”
Fears for Devon under new ‘integrated care system’ | Barnstaple, Bideford and Ilfracombe News - North Devon Gazette

Monday, 19 March 2018 0 Comments by Claire
Save Our Hospital Services (SOHS) Devon demonstrate their opposition to Devon County Council who are determined to quietly force through NHS England’s Integrated Care System (ICS) plans without Parliamentary Scrutiny, despite two judicial reviews and the neighbouring local council in Cornwall who have rejected the NHS England’s alternative to the unpopular AccountableCare Systems and Accountable Care Organisations(ACOs) which were seen by health service campaigners as a further budgetary restriction on provision of a consistent level of access to all health service across Devon leading to a post code lottery on patient access to urgently needed medical operations.
The demonstration is scheduled for 12.00 midday at County Hall, Exeter
SOHS Devon are calling for these ICS plans to be fully scrutinised to ensure that the Healthcare of the County is not put into further crisis as seen to reach a peak particularly in A&E in recent weeks.
In an extraordinary move, DCC Health & Adult Care Scrutiny Committee has been forced to allow an urgent item on the agenda about the subject at 2.00pm on Thursday 22nd March at County Hall, Exeter, after a challenge by Councillors to a DCC Cabinet decision to allow the introduction of ICS without any consultation or scrutiny.
SOHS Devon are concerned that the Scrutiny Committee were not aware of the plan to introduce Integrated Care Systems across Devon and have raised 12 questions in a letter to Dr Tim Burke, Chair of the NEW Clinical Commissioning Group and SOHS campaigners will address the Committee at 2.00pm on Thursday raising these same questions which cover governance, accountability, and seek clarity as to how the NHS principle of providing a comprehensive health service for everyone who needs it, free at the point of need, is going to survivewhen merged into this cash-strapped, means tested, largely privatised system.
All Devon residents are invited to join under the SOHS banner to demand answers to questions that will impact on everyone’s healthcare in the future.
North Devon campaigners are arranging a coach to join the protest while South, East and mid Devon campaigners are expected to join the protest at 12.00 outside.
Presentations will be made to the Clinical Commissioning Group meeting at 1.00pm and to the DCC Health & Adult Care Scrutiny Committee at 2.00pm as both meetings are being held at County Hall on Thursday.

Protest to kick off on Thursday over Devon’s looming shady accountable care system - Claire Wright.
.
.
Posted by Jeremy Woodward at 07:23