Brexit: and fishing rights >>>> "When Britain first joined the EU, the wholesale sell-out was a British choice – not an EU dictat."

Perhaps it's the UK government, rather than the EU, who is to blame for all our woes:
Westminster, not Brussels, is to blame for UK over-regulation - Telegraph
A Brexit myth of Brussels (mis)rule - Financial Times

The only problem is that once we're out, then who will we then blame?
Gina Miller: Westminster will inherit EU's 'place to blame' title after Brexit - ibtimes
If not the EU, who will Britain blame for its democratic deficit? | openDemocracy

And so it is with fishing.

But it has always been so:

'We have been hijacked': fishermen feel used over Brexit

As the reality of leaving the EU takes shape, UK fishermen are bleak about their industry’s future 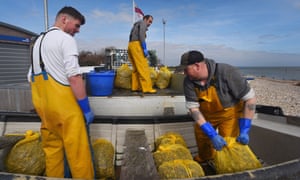 On a clear day, the fishermen who dreamed of Brexit can still glimpse their imagined future on the horizon. Just six miles out at sea from ports such as Selsey, in Sussex, they track the progress of larger European vessels whose preferential rights to fish in British waters have long been a source of envy.

“It’s sickening to see them from here while we are tied up,” says Tony Delahunty, who finally sold his family boat two weeks ago after 43 years scratching a living along the south coast. His son has gone into landscape gardening, and hopes of keeping others in the industry with the promise of change are receding fast.

For Delahunty’s entire career, a lopsided system of quotas has granted up to 84% of the rights to fish some local species, such as English Channel cod, to the French, and left as little as 9% to British boats. Add on a new system that bans fishermen from throwing away unwanted catch and it becomes almost impossible to haul in a net of mixed fish without quickly exhausting more limited quotas of “choke” species such as cod.

Leaving the EU was meant to change all that. Slowly recovering fish stocks would still need to be carefully managed, but the British industry became the poster child for those who argued that quotas could be rebalanced and rules drawn up more pragmatically to suit local conditions. The tiny domestic industry was held up as the one unambiguous beneficiary of Brexit, a symbol of everything that “taking back control” would be about.

Instead, growing numbers of British fishermen feel they have been part of a bait-and-switch exercise – a shiny lure used to help reel in a gullible public. Despite only recently promising full fisheries independence as soon as Brexit day on 29 March 2019, the UK government this week capitulated to Brussels’ demand for it to remain part of the common fisheries system until at least 2021, when a transition phase is due to end. Industry lobbyists fear that further cave-ins are now inevitable in the long run as the EU insists on continued access to British waters as the price of a wider post-Brexit trade deal.

“The perception is we have been hijacked,” says Delahunty. “That’s the anger on the coast. We have been lied to.”

With Nigel Farage and Jacob Rees-Mogg already exploiting this sense of betrayal to stage new fish-dumping protests on the Thames, pressure is growing on coastal MPs to vote against the Brexit deal when it goes before parliament in the autumn. Whether this eventually leads to an unholy alliance of leavers and remainers blocking departure entirely is a speculative calculus far beyond the raw emotion prevailing in coastal communities such as Selsey.

The problem is complicated by the fact that much of what these men catch is exported back to Europe. From the 90 lobster pots and 300 whelk pots that Harvey has laboriously hauled to the surface that morning, some of the catch will get to London but the rest is either too expensive or out of step with local taste to find a British market.

“I don’t eat them,” admits his brother Chris as they pick over a bucket of whelks, which are said to taste of rubber if you don’t cook them right. With lobsters fetching a tenner each on the quayside and up to £50-£60 by the time they reach London restaurants, Chris says he prefers a steak if he wants to treat the family.

This makes walking away from the EU without a deal for ongoing access to its consumer markets another worry for what is left of the British industry.

Some would still like to see UK fishing cut loose regardless. A rebalancing of British consumer tastes away from imported white fish and toward shellfish and other locally-caught produce could yet see this cottage industry grow into an artisanal success story.

But for now, fisheries leaders are gloomy. An extended spell in Brexit purgatory agreed by political leaders means even less say over EU policy in the short term. After that, the country faces the threat of losing not just its market for fish, but much else besides, if it does not bow to demand for continued access rights.

“It’s what we always feared,” says Barrie Deas, NFFO chief executive. “When you get to the endgame in the negotiations it becomes a binary choice and economics prevail over the politics. I think that’s what’s happened and it’s really not good news.” 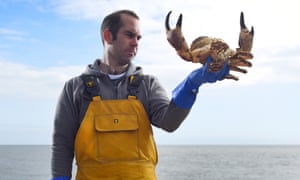 “We are in an asymmetrical and exploitative relationship with the EU,” he adds. “We want out of it and they want it to continue. It’s not difficult to see why. The danger is a very brutal endgame in which the trade deal is made contingent on sacrificing fishing.”

For the industry this would be a repeat of history. After the British long-distance fishing fleet lost its access to waters around Iceland during the so-called cod wars, there was little inshore activity to replace it because the nation had grown used to plentiful white fish from the cold seas to the north. This meant that when the government belatedly negotiated European membership in 1973, much of the inshore quota rights in British waters went to French, Dutch, Belgian and Danish fishermen.

But the continuing power imbalance is as much a result of Britain’s co-dependence on the EU for access to its markets – for fish, cars, financial services and much else besides.

Back in Selsey, industry representatives such as Delahunty with most experience of EU negotiations point out that shared management of fish stocks will always be necessary because shoals swim across national waters.

Away from the anger on the quayside, he quietly admits to having voted remain in the Brexit referendum because he could he see the promise of taking back control was not as simple as it appeared. “It was mis-sold,” he confides.

'We have been hijacked': fishermen feel used over Brexit | Politics | The Guardian

A piece in the Scotsman today looks at the blame game in the fishing industry. Here are some excerpts relevant to the South West and the UK:

A haddock caught by the trawler Carina in the Atlantic about 70 miles off Scotland's north coast (Picture: Getty)

Fishermen are angry, Tories outraged, SNP contemptuous but many more, like me, are more just saddened by what has befallen the Scottish fishing industry. As commentators said, it’s totemic in Scotland and whilst not the powerhouse it once was, it’s still a sector that resonates within the national soul. It’s part of our identity, stories and songs – many people have family links, even if much of the industry has been consigned to our history.

But, the problem has always been that whilst it’s important in Scottish political waters, it is peripheral in UK ones. There are pockets of England from the South West to the North Sea coast where it’s significant, but in the overall national ‘catch’ it’s marginal. It’s been ever thus as the sell-out of the British, never mind Scottish, fishing fleet came about long before the most recent announcement landed.

When Britain first joined the EU, representations were made about the consequences of what was being signed up to. After all, it was primarily that which saw Norway vote no in their referendum. But, the UK signed regardless and chose to blame the EU. Some restriction of powers and ceding of rights was inevitable with membership and would have happened regardless.

The wholesale sell-out, though, was a British choice – not an EU dictat. The extent of the sell-out wasn’t the fault of any EU bureaucrats or even the negotiators from other lands seeking access to our prized fishing waters. The culpability rests fully and squarely with British representation, which traded it away for more lucrative trade deals or other markets that were sought by them. Then, as now, fishing and especially Scottish fishing was marginal and dispensable.

But, the British largely avoided the blame and deftly let that fall on the big bad EU. Bitterness understandably grew in fishing communities as stocks and boats declined. The visible manifestation of their woe was the foreign trawlers that were hoovering up the catch and sinking the competition from often smaller Scottish boats, sometimes compounded by net sizes being used that devasted fish stocks that had sustained communities for centuries. The Scottish fleet was battered by the elements through many years until they thought they could see a safe harbour in Brexit.

But it was never going to be and in that they were lied to and that’s why their anger is understandable. Assurances were given and clear steers made of what might be possible with a Leave vote; but it was never to be.

It’s understandable why many in the fishing community backed it, it was any port in a storm. The bitterness and anger they felt had a target and it appeared that hope, if not salvation, was at hand. What’s inexplicable though is why some senior fishing industry leaders believed the promises made.

They should have known better and stand, if not culpable, then most certainly exposed as patsies.

The days of the great herring fleets are never coming back. Not just foreign boats but foreign crews now often operate. Some who plied their trade in inshore waters are now in fish farming or shell fish. Others have given up the trade and who can blame them, for despite the songs and tales it was cold, hard and dangerous work.

Unlike mining it’s not entirely disappeared but as with that great sector, I can’t help think of the phrase “lions led by donkeys”.