Earlier in the year, another book came out, in English, from the radical Swedish researcher who influenced Naomi Klein:

The Progress of This Storm

Nature and Society in a Warming World

“Andreas Malm’s new masterpiece The Progress of This Storm fills an urgent need, as did his seminal Fossil Capital in 2016. In his earlier book, he demonstrated that the fossil capitalism was not preordained by God or Nature or Technology, and that the answer is system change not climate change.

In his new study, he teaches us how we can transcend those fashionable, ecological philosophies, clouding our understanding, that stand in the way of the unity of environmental theory and practice. No more definitive work of its kind exists today.”

With a recent interview here: 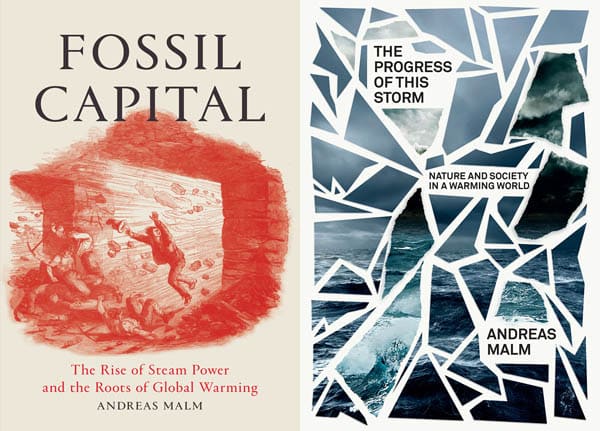 The author of Fossil Capital and The Progress of This Storm says there are reasons to be hopeful, but success depends on building a global movement of unprecedented scale

Malm presented his dissertation Fossil Capital in 2014, at Swedens’ Lund University. The book is a tome of 797 pages in total, and a breakthrough in the debate on climate change. I read it myself when it was newly published, and it gave me an epiphany. In it Malm claims that, even by the mid 19th century it was far from given that the global economy would come to be dominated by fossil fuel. Based on a massive amount of empirical data, Malm showed that the eventual breakthrough of coal power was not due to its efficacy as a power source, but because it made controlling the workforce much easier. While hydro power — which at the time was both cheaper and more energy-efficient — was tied to certain locations of rivers in open landscapes, steam engines could be set up in towns and cities, where there an infrastructure of schools, poor houses and police forces was already in place. This in the long run made it easier for capitalists to exploit the work force and guarantee their profits.

The conclusions of the dissertation were revolutionizing: capitalism and the fossil economy are much more intertwined than we had hitherto imagined. Thus Malm’s worked opened for research within the field now known as Capitalocene — his research inspired Naomi Klein in her writing This Changes Everything.

"Without a Popular Movement We Don’t Stand a Chance” - Verso

He is working with the Mayor of New York to make a legal challenge to the oil companies:

A growing movement against climate change

Not since the 1950s have as many pipeline projects been under construction as today, Malm underscores. At the same time there are reasons to be hopeful. The movement against climate change is growing. In Germany large protests against coal power plants are held every year. In the US activists are blockading the building of new pipelines. Malm gets enthusiastic as he talks about how Bill de Blasio, the mayor of New York City, recently announced that the city is planning to sue five giant oil companies for contributing to the hurricanes that have recently hit the city.

“At the press conference he sat flanked by Bill McKibben and Naomi Klein. The message couldn’t have been any clearer: this only came about as a result from the pressure mounted by the climate movement. We have to appreciate the symbolic power of something like that.”

Then he turns pessimistic again.

“But the movement still needs to grow so much bigger, and the different groups all over the world have to be linked up on a scale we have not seen so far. Otherwise we don’t stand a chance against fossil capital.”

Andreas Malm: 'Without a mass movement we don't stand a chance against fossil capital' - Climate and capitalism

Book Review: Fossil Capital: The Rise of Steam Power and the Roots of Global Warming by Andreas Malm

This is a superbly written, measured and rigorous book, finds John Tomaney, which should be read by anyone interested in the history of fossil capital.

Early industrialisation relied on flow and animate energy, especially the water mill. Eighteenth and early nineteenth-century innovations, such as Arkwright’s water frame and Crompton’s mule, were attached to water mills mainly located in the deep valleys of the west of Scotland and north of England, most notably in Lancashire where it powered the rise of the cotton industry.

Growing interest in the use of steam power for industry occurred following the waves of industrial militancy during the crisis of overproduction in the 1820s. Ure promoted mechanisation to liberate production from reliance on the worker. The self-acting mule was developed to be driven by steam power.

As spinning was mechanised, weaving remained a scattered cottage industry powered by low-cost animate power – workers – who masters found hard to discipline. The invention of the steam-driven power loom allowed the creation of the ‘combined factory’: a new generation of mills that integrated the production process under one roof, thereby ending the role of the unruly cottage weavers. Steam power was therefore a critical manifestation of class power.