This is British Science Week > help map plastic on our beaches

One such project is using the latest technology to map out plastic pollution on our beaches:

- as reported in the press over the weekend:
Scientists seek public's help to map plastic on UK beaches | Environment | The Guardian


Drones are helping to clear up Britain's beaches: Scientists recruit members of the public to spot plastic litter in aerial footage of our shores

Scientists are recruiting members of the public to help clean up the shores of Great Britain. Plastic waste is scattered across the beaches of the UK and a computer programme is being developed to help spot the litter. The charity campaign needs human volunteers to help train an artificial intelligence algorithm that will automatically spot plastic in pictures taken by drones.
Scroll down for video 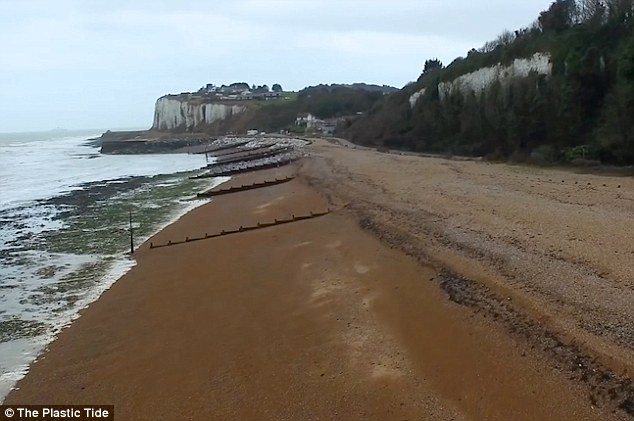 +8
The Plastic Tide is a charity that is recruiting members of the public to spot plastic litter in drone-footage to train a computer algorithm
Plastic Tide, the charity behind the project, hopes to harness cutting edge drone and algorithm technology to create an open source map of the plastic pollution problem. Peter Kohler, founder and director of The Plastic Tide, said: 'Marine creatures die each year through starvation due to eating plastic that stays in their stomach, making them feel full. It is estimated that we eat up to 11,000 pieces of microplastics a year and, if nothing is done to tackle the issue of plastic in our oceans, it's estimated that there will be 80 million metric tonnes of plastic going in to the sea a year by 2025.
'The good thing though is everyone has the opportunity to be part of the solution. Helping identify rubbish on The Plastic Tide site will be one invaluable way of helping to keep our beaches clean.'
The citizen science initiative is being launched in line with the British Science Association, based in London, and British Science Week. Ivvet Modinou, head of engagement at the British Science Association, said: 'Everyone can get involved in science, and British Science Week is the perfect way for people of all backgrounds, ages and interests to take part in a project like The Plastic Tide and make a difference. 'We encourage everyone to put their scientist hat on today and start tagging.' 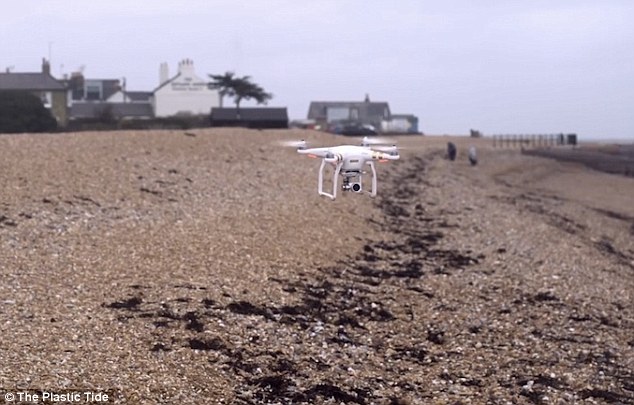 +8
The Plastic Tide has used drones to fly over beaches, taking thousands of images which are then uploaded to a website. Here, people can browse the pictures and tag bits of litter they see 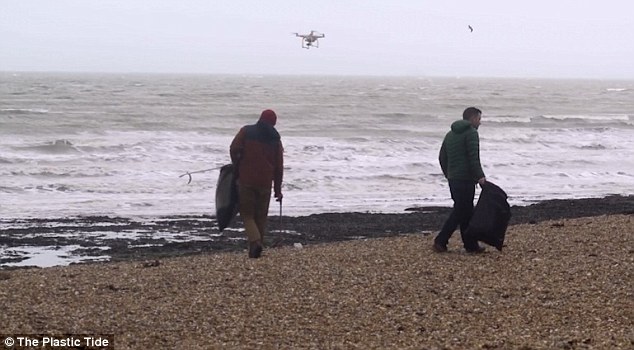 +8
Volunteers are being recruited to help rid the shores of the UK from plastic waste. Drones and citizen science are being combined to help spot the litter 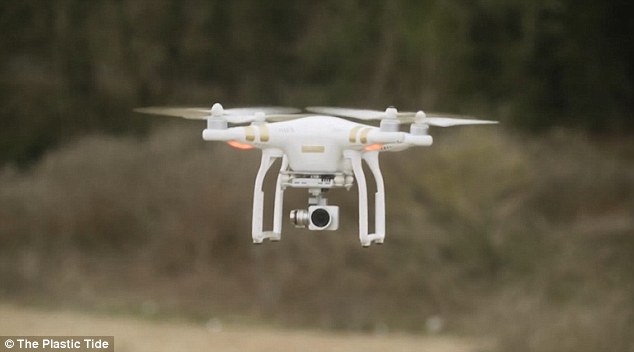 +8
Drone footage of the UK beaches are being uploaded to a website where the images can be trawled through by volunteers who pick out any plastic waste
The Plastic Tide used drones to fly over beaches, taking thousands of images which are then uploaded to a website. Here, people can browse the pictures and tag bits of litter they see.
The information from the public is used to teach a machine-learning algorithm how to spot litter from the drone images, to build a much clearer picture of how bad plastic pollution is. According to the new project, the most common items of rubbish found on UK beaches are plastic rope and pieces of net.

HOW DAMAGING ARE PLASTIC BOTTLES?

Of 30 billion plastic bottles used by UK households each year, only 57 per cent are currently recycled.
With half of these going to landfill, half of all plastic bottles that are recycled go to waste.
Around 700,000 plastic bottles a day end up as litter.
This is largely due to plastic wrapping around bottles that are non-recyclable.
Bottles are a major contributor to the increasing amount of plastic waste in the world's oceans.
Researchers warned eight million tonnes of plastics currently find their way into the ocean every year - the equivalent of one truckload every minute.
The amount of plastic rubbish in the world's oceans will outweigh fish by 2050 unless the world takes drastic action to further recycle, a report released in 2016 revealed.
At current rates, this will worsen to four truckloads per minute in 2050 and outstrip native life to become the largest mass inhabiting the oceans.
An overwhelming 95 per cent of plastic packaging - worth £65 - £92billion - is lost to the economy after a single use, the Ellen MacArthur Foundation report stated.
And available research estimates that there are more than 150 million tonnes of plastics in the ocean today.

+8
Plastic pollution is ruining the ecosystems of the world, both marine and terrestrial. It litters shorelines, snags animals and suffocates entire populations of animals
So much plastic is dumped into the sea each year that it would fill five carrier bags for every foot of coastline on the planet, scientists have warned.
More than half of the plastic waste that flows into the oceans comes from just five countries: China, Indonesia, Philippines, Vietnam and Sri Lanka.
The only industrialized western country on the list of top 20 plastic polluters is the United States at No. 20.
The US and Europe are not mismanaging their collected waste, so the plastic trash coming from those countries is due to litter, researchers said.
While China is responsible for 2.4 million tons of plastic that makes its way into the ocean, nearly 28 percent of the world total, the United States contributes just 77,000 tons, which is less than one percent, according to the study published in the journal Science.


Drone technology used to track plastic washing up on our beaches 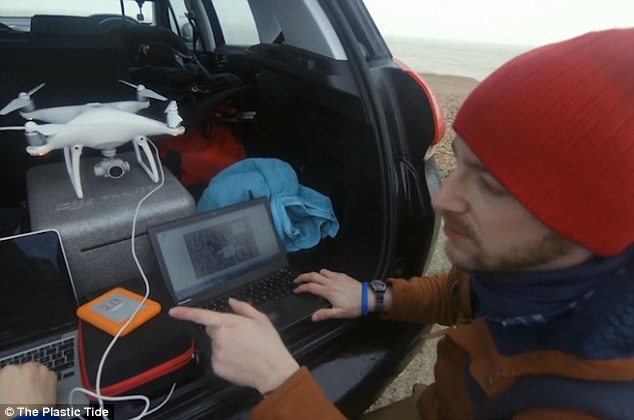 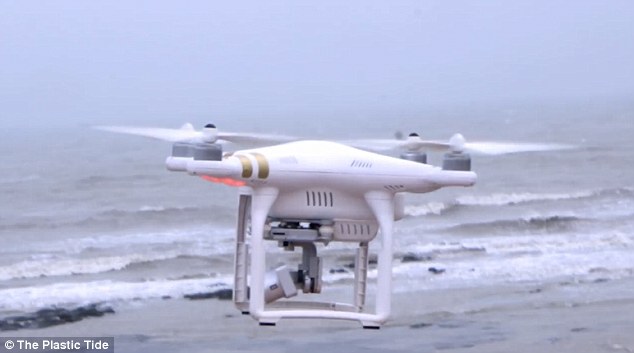 +8
According to the new project, the most common items of rubbish found on UK beaches are plastic rope and pieces of net 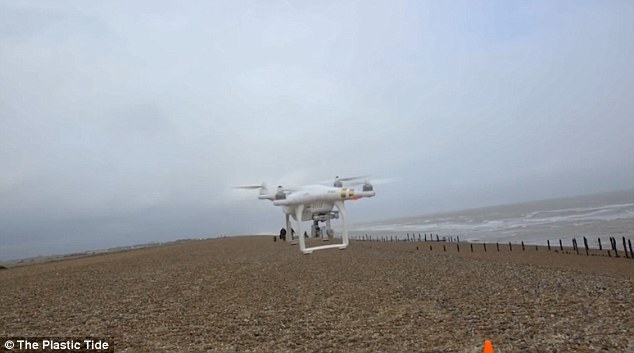 WHAT ARE THE TOP 10 MOST COMMON PIECES OF LITTER FOUND ON UK BEACHES?

Drones are helping to clear up Britain's beaches | Daily Mail Online
.
.
.
Posted by Jeremy Woodward at 01:30