Last month, we had our first fracking martyrs:
Anti-fracking activists jailed for 'causing a public nuisance' during four-day protest | The Independent

Nobody seems to like fracking:
From green activists to Tory MPs, why does everyone hate fracking so much? | The Independent

However, the current government has made it a much easier thing to do:
Futures Forum: The system is rigged against onshore wind ... and is about to be rigged in favour of fracking
Futures Forum: The new National Planning Policy Framework has been "illegally adopted because the government failed to assess its environmental impact"

As reported this week:
The Tories have made fracking as easy as building a garden wall | The Independent
Fracking earthquake laws could be relaxed as government aims to encourage gas extraction | The Independent

There have been developments in the last twenty-four hours though...

And tomorrow, the courts will decide whether to stop the first drilling:
High Court to rule on bid to temporarily halt Cuadrilla fracking | Somerset County Gazette
Energy Voice | Cuadrilla to find out fracking fate tomorrow - News for the Oil and Gas Sector

It takes an outsider to give some perspective: here's the view from the New York Times: 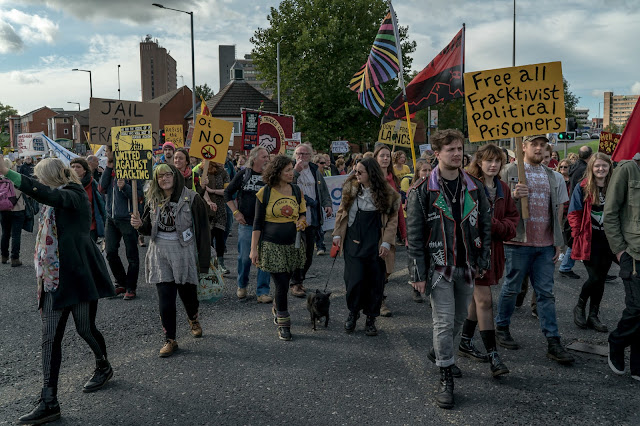 Demonstrators took to the street last week outside Preston Prison in Britain to support three activists who were jailed for blocking Cuadrilla’s fracking site. Credit Andrew Testa for The New York Times

LITTLE PLUMPTON, England — In a farmer’s field in northwestern England, a decade-old energy company hopes to overcome its decidedly rocky history of shale drilling in the United Kingdom.

Seven years after earthquakes followed its first attempt at hydraulic fracturing, that company, Cuadrilla Resources, has returned with a government-enforced go-slow approach. It has set up a chain of seismic monitors three miles beyond its dig to gauge tremors. Contractors from Schlumberger, the oil field services firm, plan to pace themselves and spend up to three months stimulating the wells using the process known as fracking. In the United States, a similar effort would take just a few days.

Francis Egan, the chief executive of Cuadrilla, will be monitoring closely when the first gush of water, sand and chemicals cracks the shale bed called the Bowland basin. So will wary homeowners and environmentalists who have battled Cuadrilla in court. They were in court on Thursday in the latest effort to delay the project.

This plot of land outside the city of Blackpool, where cows graze and anti-fracking activists have set up camp nearby, may decide the future of fracking in Britain and other parts of Europe. Mr. Egan, in an interview last week, said his own business calculation could be reduced to a simple truth: “It’s all down to the rocks.” 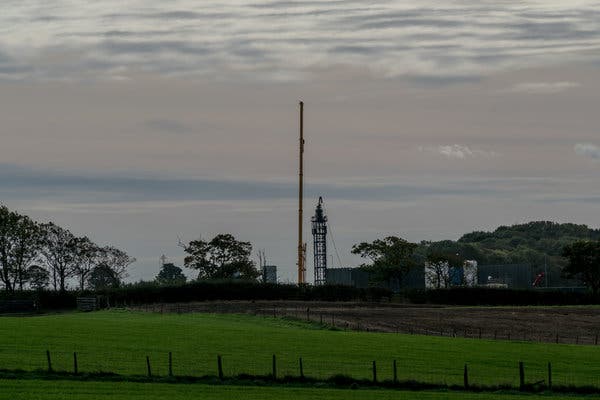 The Cuadrilla site on Preston New Road near Blackpool. The company is taking a slow approach, imposed by the government, after its last efforts triggered tremors. Credit Andrew Testa for The New York Times

In a country that has long valued a robust oil industry, fracking has been an exercise in frustration for energy explorers. Britain has been ambivalent about the innovative water-blasting method even as it has transformed the United States into a major petroleum exporter.

The central government of Prime Minister Theresa May has supported shale exploration, in part because of the declining output from oil and gas fields in the North Sea. But local councils have been far more critical of possible environmental and community costs.

Their skepticism matters because they have a large sway over land use. A series of small earthquakes in 2011, when Cuadrilla drilled in another site, was documented by the British Geological Survey and stoked discontent with fracking. The controversy stirred demands for more stringent safety measures as well as debate over the risk to water and green space in the English countryside.

“I used to fish these ponds and walk these little lanes,” said John Norcross, a groundskeeper from the nearby village of Marston, who supports the protesters. “I don’t want this insidious thing anywhere in our county.” 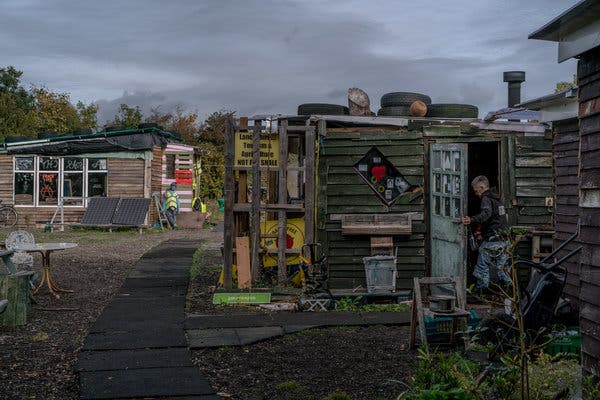 A protest camp near Cuadrilla’s fracking site. The company estimates that the northern district of Lancashire holds 200 trillion cubic feet of natural gas just in its license area. Credit Andrew Testa for The New York Times

What happens in this northern district of Lancashire — which Cuadrilla estimates holds 200 trillion cubic feet of natural gas just in its license area — could embolden both sides. Yet, a safe and unremarkable dig where Cuadrilla has prepared two wells is essential for the company.

“I think it will be absolutely critical,” said Peter Styles, a professor emeritus of geophysics at Keele University in Newcastle who has studied shale and concerns over this site, called Preston New Road.

Antipathy often arises in discussions about shale drilling across Europe. Environmental fears have led to some bans, de facto or de jure, in France and Germany. Poland and Romania, where coal remains a vital energy source, were receptive, but interest from big energy companies soon melted. Chevron, among others, has not found sufficient resources to justify the expense of drilling.

Much of Europe relies on imports from Russia or the Middle East. Still, analysts forecast that Britain and Europe will have to find new energy sources, and that has pried an opening for Cuadrilla and other explorers. 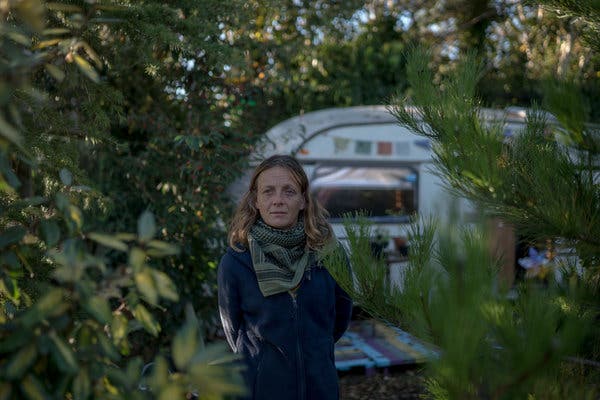 Katrina Lawrie has spent the last 18 months living on a farm near the Cuadrilla site, monitoring traffic and attending protests. “I truly believe that fracking is absolutely disastrous not only for the environment and the water but to communities, too,” she said. Credit Andrew Testa for The New York Times

Mr. Egan, who spent decades working in the international oil and gas industry, was brought into Cuadrilla after the earthquakes. He was hired to upgrade the company’s procedures and shore up credibility with the British regulators.

In an interview last week, Mr. Egan stressed that the company was cautious in its approach and adding some high-end technological help. Cuadrilla has built a seismic warning system to a degree of sensitivity set by the government; any slight tremor of 0.5 on the Richter scale means shutting down the operation for at least 18 hours, he said.

Mr. Egan remains optimistic about the market possibilities because extensive core samples of rock from the site show the energy that could be unbound. The rock fractures easily, and “we know there is a lot of gas in it.” Still, until the company runs what are called flow tests, late this year or early in 2019, “we won’t know what rate it’s going to come out,” he said.

Surveys show Britain has potentially large shale gas resources, but more drilling needs to be done to assess how much, if any, can be produced economically. A quick calculation of its potential, though, reveals that big profits are possible. If just 10 percent of the 200 trillion cubic feet believed to be under Cuadrilla’s license area in Lancashire can be recovered, that would equal about seven years of current British gas consumption. 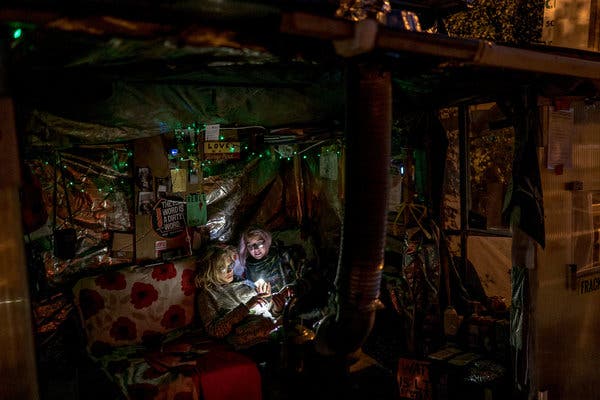 Protesters keep a 24-hour vigil in a shack almost directly across from Cuadrilla’s gate. Credit Andrew Testa for The New York Times

Mr. Egan said that exploration had been expensive but that Cuadrilla would eventually push costs down to $15 million or less for a well. He estimates a well might produce as much as $30 million in revenue — using the average price of gas in recent years — over its life span. There is “absolutely no doubt” that Cuadrilla could make money if gas can be extracted from the shale, he said.

Ownership of Cuadrilla is now roughly split between Riverstone Holdings, an American private equity firm focused on energy, and A. J. Lucas, an Australian company.

Industry executives believe that although Britain may be a decade or two behind the United States, these companies are clearing a path to a viable shale gas business.

Cuadrilla and another company have successfully appealed when local governments rejected applications. Lancashire, for instance, turned down Cuadrilla’s plans in 2015. Cuadrilla won an appeal from a higher planning agency a year later. Cuadrilla has also gone to court to protest the protesters and obtained an injunction in July barring them from obstructing its work site. In September, a judge in nearby Preston jailed three protesters for blocking the site and climbing on trucks there. 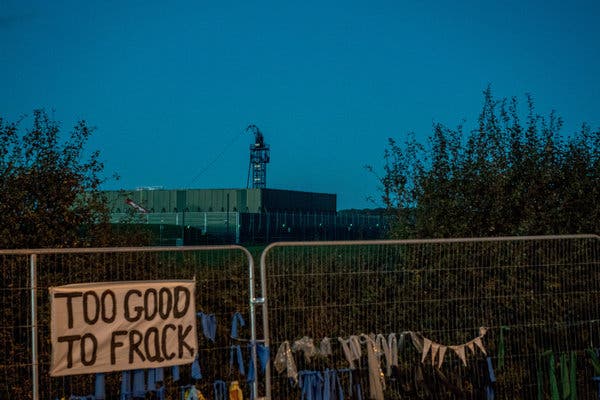 Industry executives believe that although Britain may be a decade or two behind the United States, companies there are on the way to a viable shale gas business. Credit Andrew Testa for The New York Times

“It’s painful, obviously, in terms of time and costs, but what is actually happening is establishing precedent and, almost, case law,” said John Blaymires, chief operating officer of Igas Energy, another shale company.

The optimistic view of executives like Mr. Egan and Mr. Blaymires is that what looks like near-paralysis to outsiders is actually the trials and errors of a fledgling industry. Artem Abramov, who follows shale for Rystad Energy, an Oslo-based market research firm, forecasts that by 2040 shale drilling could account for half of British gas production. That would mean thousands of wells must be drilled, an engineering and training challenge.

The political side may be more difficult.

Unlike in the United States, where shale abounds in more remote areas, shale drilling in Britain has been pursued near some residential areas. Truck traffic and the movement of heavy machinery have spurred complaints, and a survey in July by YouGov found that 42 percent of respondents said Britain should not extract gas from shale rock by fracking; 29 percent approved.

Katrina Lawrie, 40, has spent the last 18 months living at a farm near the Cuadrilla site, monitoring traffic in and out and routinely attending protests. “I truly believe that fracking is absolutely disastrous not only for the environment and the water but to communities, too,” she said in an interview.

Protesters keep a 24-hour vigil in a makeshift shack almost directly across from Cuadrilla’s gate. A retired university professor, Celia Briar, was among those who said they were motivated by local and global concerns about fracking. Ms. Briar said she feared gas from New Preston could seep into the groundwater supply, affecting milk and vegetables.

“To contaminate a major food-growing area for a little bit of gas is insane,” she said.

For those who favor the industry, time is the enemy.

That so little has been accomplished in a decade could make investors reluctant to spend years pursuing shale resources — as well as fighting bouts of controversy. “We are a lot less likely now to see shale gas play a major role in U.K. supply than we were six years ago,” said John Williams, senior principal at Pöyry Management Consulting, an Oxford firm that has studied the economics of shale gas for clients, including Cuadrilla.

Fracking in Britain? A Driller Tries Again 7 Years After Triggering Earthquakes - The New York Times
.
.
.
Posted by Jeremy Woodward at 14:38