Brexit: and "everyone’s out for their own as far as meat and dairy go: trade negotiations sink or swim on these issues"

As noted over the weekend:

The reality is that when it comes to agriculture, special relationships mean little in practice. Everyone’s out for their own as far as meat and dairy go, and trade negotiations sink or swim on these issues.

Which will be a worry for the farming industry: 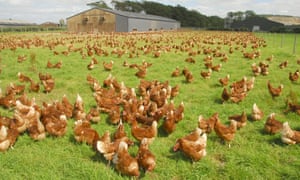 Free-range hens in Cumbria. The NFU says the agriculture bill is being speeded through parliament without sufficient scrutiny. Photograph: FLP/imageBroker/Rex/Shutterstock

The National Farmers’ Union has told Theresa May she must treat the food industry as being of equal importance as the car sector, with special protections enshrined in new laws covering standards and production.

The NFU president, Minette Batters, said she had raised concerns in a phone call to the prime minister that food production was not at the heart of a new agriculture bill, the first major overhaul of legislation in the sector since the second world war.

There have been warnings of possible food shortages in Britain in the event of a no-deal Brexit.

“We told her food is no different to the car industry. Even if the production is safe, we need to protect our food production and our jobs,” Batters said. “Why should the shopper who has only £80 a week to feed a family of four be disadvantaged and not have the same quality of food as others as a result of Brexit?”

Speaking at an NFU event in London on Thursday, Batters said the bill would give the government unprecedented powers that could lead to a lowering of standards.

The NFU argues that the bill is being speeded through parliament without sufficient scrutiny.

The NFU’s main concerns are that the emphasis is on the future of the environment rather than food production, and that the bill contains sweeping powers to change policy on agriculture.

“It’s fair to say there is a lot of what we asked for in the bill, but what if another secretary of state or government decides that food production isn’t actually that important?” Batters said. “It has been a long-held belief of some politicians that food doesn’t matter. Remember Margaret Beckett once said: ‘We are a wealthy nation, we can import our foods.’ It is imperative that we have this fight with the government.”

Batters said that of the 36 clauses in the bill, 28 were non-committal, stating the government “may” act in a certain way rather than “will” or “shall”, leaving wriggle room for future governments. The NFU is demanding a series of amendments changing the “mays” to “will” or “shall”.

“If they don’t do this in legislation then they are not being honest. This bill will expose the honesty or dishonesty of the government,” Batters said.

After a foot and mouth outbreak in 2007 when exports to the EU were banned, only the top 25% of lamb producers survived, and that was because of government financial support. “If there is market failure like this again, the government just saying it ‘may’ or ‘might’ intervene is not good enough,” Batters said.

Other clauses in the bill could be used to change farming practices unless the language was strengthened, she said. For example, it would be possible under the current bill for the government to deviate on standards such as the quantity of antibiotics in poultry.

The bill is designed to provide a framework for after Britain leaves the European common agriculture policy as part of Brexit.


NFU urges May to put food production at heart of agriculture bill | Environment | The Guardian
.
.
.
Posted by Jeremy Woodward at 01:00