The Greens in Bavaria: “Saving the world pragmatically, one step at a time.”

The elections in Germany's biggest state could look like a win for liberalism:
The Bavaria election results show that Merkel's liberal, centrist approach is appealing to German voters | The Independent

Or not:
German voters have turned right — and left | Financial Times

What's clear is that the Greens have done very well:
Merkel′s sister conservatives battered in Bavaria, Greens gain big | Germany| News and in-depth reporting from Berlin and beyond | DW | 14.10.2018

As the weekend FT anticipated:

Katharina Schulze, the woman leading the Green surge in Germany 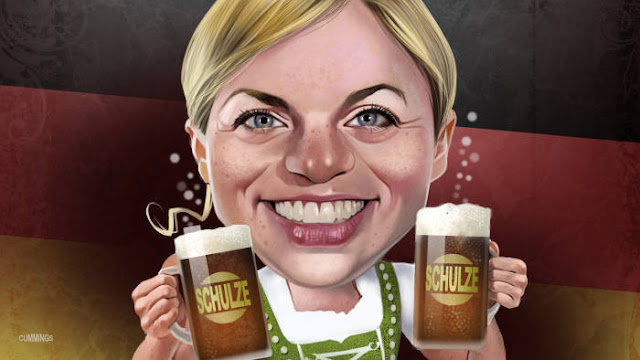 Tobias Buck
OCTOBER 12, 2018
Print this page39
It has been a long day on the campaign trail, but Katharina Schulze’s smile never falters.
The co-leader of the Bavarian Green party works the crowd in Holzkirchen, a small town south of Munich, with all the enthusiasm one might expect from a 33-year-old political newcomer on the cusp of a great electoral victory. Ms Schulze’s responses to questions are thorough but also relentlessly upbeat, and seem infused by her personal political motto: “Saving the world pragmatically, one step at a time.”
If the polls are right, Ms Schulze and her party will get their chance to save the world — starting with Bavaria — after Sunday’s regional election in the German state. The latest surveys predict the Greens will win 18 per cent of the vote, more than double the party’s share five years ago. If confirmed, that result would make the Greens the second-biggest party in the state, and could turn Ms Schulze and her fellow party leader, Ludwig Hartmann, into the kingmakers of Bavarian politics.
The Green surge in one of Germany’s largest and most prosperous Länder — home to business giants such as Siemens, Allianz and BMW — is likely to resonate far beyond the borders of Bavaria. It presents a fiendish political challenge not just to the state’s ruling Christian Social Union, the conservative sister party of Angela Merkel’s Christian Democrats, but also to the Greens’ former allies on the left. Germany’s beleaguered Social Democrats are now at serious risk of being eclipsed by the Greens. In Bavaria, the baton appears to have passed already: polls predict the SPD will plummet to just 11 per cent on Sunday.
According to Ms Schulze, the recent success of the Green party is a sign of the deep political unease felt by many mainstream voters in Germany. “Many people have a desire for a new political home. They have a feeling that things are shifting and turning, and that the old way of doing politics has changed,” she said recently.
The Greens stood out, she argued, because they continued to defend progressive causes such as open borders, European integration, and stringent environmental rules at a time when other leftwing parties were under pressure to bend to populist rhetoric. “We don’t play bullshit bingo. We have a clear line,” she said.
Raised on the banks of the Ammersee, a lake in the conservative Bavarian heartlands south of Munich, Ms Schulze discovered her flair for politics early on. She served as student representative at her local high school, in part because, in her own words, “I can never keep my mouth shut”.
Ms Schulze gained wider attention a few years later, when she became the spokeswoman of the successful grassroots campaign against Munich’s bid to host the Winter Olympics in 2022. Aged only 28, she stood for a seat in the Bavarian regional parliament in 2013 — and won. Unusually for a budding Green politician, she showed a keen interest in police and security matters, joining night patrols and organising conferences aimed at bringing together police and security officials with Green activists.
That bridge-building experience could yet stand Ms Schulze in good stead if, as seems possible, the CSU will have to turn to the Greens to form a coalition government after Sunday. For Markus Söder, the CSU prime minister of Bavaria, a tie-up with the environmentalists would be a political calamity of the first order: it would dilute his party’s conservative brand at home, and weaken the CSU’s influence in Berlin, where it has traditionally punched above its electoral weight. Ms Schulze, in turn, has signalled that the Greens are ready to discuss a coalition with the CSU — but also made clear that her party will demand a steep political price from the incumbents.
Her own electoral appeal is beyond doubt. “She is the very opposite of a grouchy Green,” said Ursula Münch, director of the academy for political education in Tutzing, Bavaria.
Both Ms Schulze and her co-leader, Mr Hartmann, belong to the centrist wing of the Green party. They are happy to talk about the need to save the bees, but their pragmatic streak has also allowed the party to broaden its appeal beyond traditional Green strongholds in affluent and well-educated urban districts. “The Greens have managed to occupy the theme of Heimat [homeland],” says Prof Münch. “In the past this was a theme that was exclusive to the CSU . . . But now the Greens have come and laid claim to the term Heimat themselves.”
Indeed, the Green desire to wrest “Bavarianness” from the exclusive domain of the CSU has been clear throughout the campaign. Bavarians are famously protective of their state’s natural beauty, a sentiment that sits well with the Greens’ plea for curbing construction. Many Bavarians also remain closely attached to the Roman Catholic Church, which has played an important role in organising help for refugees. According to Ms Schulze, it is precisely among conservative Christian value voters — once a bastion of CSU support — that the Greens are gaining ground.
The party’s attempt to challenge the CSU’s role as the party of Bavaria even extends to fashion. Ms Schulze appears regularly at campaign events dressed in a dirndl, the traditional costume worn by women in the Bavarian and Austrian Alps. The habit, she suggested, was both a political and aesthetic statement: “The dirndl does not belong to the CSU. Besides, I like wearing it.”
The writer is the FT’s Berlin correspondent
Katharina Schulze, the woman leading the Green surge in Germany | Financial Times
.
.
.
Posted by Jeremy Woodward at 07:34