There is the perception that this part of the UK is not doing very well when it comes to rail infrastructure:
Futures Forum: The SouthWest continues to get a bad deal for its railways

The notion of reopening the Sidmouth branch line caught the imagination last year:
Futures Forum: "If Chris Grayling is reopening railway stations closed by #Beeching he should start with the one at Sidmouth, whose beautiful seafront promenade and shopping area are ruined by a continuous traffic jam of lazy people in 1980s cars who seem to be unable to walk more than 25 yards."

Here's the national Railway Blogger, which looks at Sidmouth as an example of what was done and what could be done:

The need to restore railway branch lines is greater than ever.  I have touched on the destruction of railway lines in the 1960’s in my post on conspiracies and railway closures.  Clearly the railway was losing money due to many factors. There remains the view that uneconomic branch lines should remain closed simply because they lost money 50 years ago. I don’t support this outdated and VERY simplistic view. The propensity for people to travel has increased considerably over the past half century since lines were closed. There are many who remember when a branch line was running in their area and deeply regret it closing. This is partly due to crowded and less safe mode of transport of the roads of today. Such a situation was predicted 50 years ago by people such as John Betjamin.

If a railway timetable does not meet passenger needs then they unlikely to use the railway. If a passenger cannot make the connections they want then they are going to choose another method of travel. Many 1960’s railway timetables are littered with examples of really poor timetable planning and deliberately missed connections. Branch lines simply didn’t stand a chance. People were not prepared to travel on the railway when, for example, they had to wait longer for a connecting service than the actual total travelling time.

A prime example, in the 1960’s when the line to Sidmouth, Devon was open, there was never a decent connecting service between Sidmouth and Exeter at Sidmouth Junction (now Feniton). British Rail refused to improve connection times or to put on a direct service from Sidmouth all the way to Exeter despite public pressure at the time. As a result, the Sidmouth branch line was under utilised and closed as part of the Beeching cuts. This situation was replicated across the country. Indeed in magazines from the 1960’s we can read reports that the rail service was poor on branch lines with few viable connections.
restore railway branch lines

And campaigns do work:
Network Rail to consider plans to reopen the Newton Abbot to Heathfield railway line - Devon Live

Here's the latest campaign to reopen the line:


Reopening Sidmouth station is a vision for a cleaner Devon, support jobs and boost economy 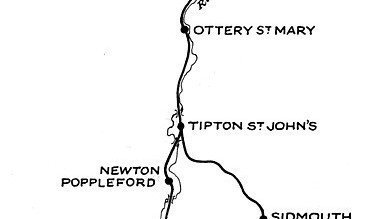 For over fifty years, the railway route from Sidmouth Junction (at Feniton), through Ottery St Mary and Tipton St John to Sidmouth, has been closed and forgotten. The track was lifted, and only footpaths remain.  The line closure was recommended as part of the infamous country-wide cost-saving scheme recommended by Dr Richard Beeching in 1965.  The railway had opened in 1874, bringing more visitors to the area, to support the expanding hospitality trade, as well as goods services providing agricultural supplies, building materials, and coal both for domestic heating and for the local gas-works.
Sidmouth has been a popular seaside resort in East Devon for over two hundred years.  Every year since 1955 the Sidmouth Folk Festival has attracted tens of thousands of international visitors and traditional music and dance lovers every year, contributing to traffic snarl-ups in and around the town in early August.  The founding of the Festival was recognised by a commemorative blue plaque located at the open space called The Ham on BBC Music Day in 2017, a true symbol of our national heritage. Restoring the rail service would help to ease the unwelcome traffic congestion during the Festival.
There is no doubt that the local communities in Ottery St Mary, Sidmouth and neighbouring villages would benefit from a restored local train service. If the stations at Ottery St Mary and Sidmouth were re-opened, there would be an increase in demand from visitors and business investors, supporting jobs and businesses, encouraging new local investment, and boosting the economy of the area.  There would be an extra bonus from the easing of road traffic congestion and a reduction of environmental pollution from carbon emissions by petrol and diesel emissions in the town centres.  As a direct comparison, the recently re-opened Borders Railway line in Scotland has been linked with increased visitor numbers, while the construction phase supported extra jobs, and acted as a catalyst to increase business development with a doubling of new housing schemes throughout Midlothian.
Sidmouth has high air pollution, and according to a recent report of East Devon District Council about Air quality, the air quality in Sidmouth is getting worse, the pollution comes from diesel alone. Reopening a railway and reducing car exhaust could save thousands of lives. Reopening the Sidmouth railway will not only help to improve the environment and traffic congestion in the area, but also ensure that your children and grandchildren have fresh air to breathe.
Reopening the Sidmouth railway line offers a clear vision for a cleaner Devon, with the opportunity to improve the livelihood of East Devon.  On a personal note, I currently run a nail-care salon in Honiton, and hope to expand to Sidmouth quite soon.  As I do not drive, the restoration of a rail link from Honiton to Sidmouth would greatly assist my own business expansion plans.
Support for the restored railway line has already attracted over 300 supporters within serveral days, demonstrating that there is a genuine demand to improve transport links in the area.
Please help reopening Sidmouth station by signing my petition calling on our Prime Minister Theresa May and Transport Secretary Chris Grayling to use their power to act and intervene.
I appeal to the Transport Secretary Chris Grayling to reopen Sidmouth station and Ottery St Mary station for future economic prosperity.