Climate change: "there is a sense of a new consciousness abroad concerning the future of our planet"

A seasonal message from Sustainable Crediton:

As the year turns, there is a sense of a new consciousness abroad concerning the future of our planet. In Australia, school children are protesting at what they see as an inadequate response to climate change by their government. Their Prime Minister's response that 'what we want is more learning in schools and less activism in schools' raises an interesting question about the learning value of activism.

At home, the widespread actions of the Extinction Rebellion movement have been little reported, but may be poised to take more centre stage in the year to come.

In Sweden, a fifteen year old schoolgirl, Greta Thunberg, is conducting a one person protest about climate change which is inspiring others across the globe.

It is heartening to see so many young people galvanised into action and no longer prepared to settle for warm words from our leaders. They surely deserve our respect and support.

And what's been happening in Australia meanwhile has caught the imagination worldwide:


Thousands to take part in the nationwide Big School Walk Out for Climate Action
Organisers encourage students to abandon classes to attend the demonstration
PM urged pupils not to attend, saying he didn't want to see 'activism in schools'
Some teachers advised students on how to avoid being punished for truancy

Teachers have been caught urging students to skip school so they can take to the streets for an organised protest.

Thousands of people are expected to take part in the nationwide Big School Walk Out for Climate Action on Friday, which will start in Sydney outside the NSW Parliament House at 12pm. Events are planned in all capital cities, along with 20 regional areas. Organisers have encouraged primary and high school students across the country to abandon classes and attend.

The Sydney protest will start outside NSW Parliament House at midday on Friday. Demonstrations are planned on the day nationwide

A union-affiliated group praised the group for its 'heroics'.

'Your heroic example is an ­inspiration to us all and we wish to convey our sincere support for you all on this vital issue,' secretary of the Inner City Teachers Association, John Gauci, wrote, The Daily Telegraph reported.

Students told the publication some teachers have advised them of a loophole that can help them avoid punishment for truancy...

Hundreds of students are planning to leave school this Friday to protest government inaction on climate change.

Hundreds of students are vowing to put the books away and converge on MP offices and parliaments around the country in the Big School Walk Out for Climate Action.

On Monday, Mr Morrison implored children to stay in class rather than protesting things that "can be dealt with outside of school. What we want is more learning in schools and less activism in schools," he said.

But students aren't happy with the response. Melbourne student Jagveer Singh, who will take part in the protest, said Mr Morrison's broadside made him "want to go on strike even more"...

Student protests show Australian education does get some things right

Australia’s education system often suffers a barrage of criticism – claims of stagnant or declining NAPLAN results, slippage in international comparisons and rankings, and an irrelevant curriculum, tend to draw the attention of politicians, the media, and the Australian public.

It’s not often we are able to celebrate what’s right in Australia’s education system. But yesterday’s student presence at Parliament house and Friday’s protests where more than 15,OOO Australian students skipped class to demand greater action on climate change should be cause for celebration.

Far from being concerned about an afternoon off school, parents should feel satisfied schools and teachers are doing their job. Participation in these protests meets many of the key goals of our current education system, including students’ capacity to engage in, and strengthen, democracy. Rather than proof of a flawed education system, politically active and engaged students are evidence many aspects of our education system are working well...

With the planet burning, we need to take control ourselves

Our representatives seem to be incapable of a serious response. Schools and workplaces should become parliaments 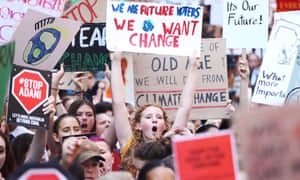 ‘Across Australia, students marched for action on what Kevin Rudd called, all those years ago, the “greatest moral challenge of a generation” – and politicians responded with adolescent trolling’ Photograph: Mark Metcalfe/Getty Images

If the conservative resistance to marriage reform taught the high school students of 2017 not to trust the Liberals, Scott Morrison seems now determined to repeat the lesson for their slightly younger brothers and sisters.

“We do not support our schools being turned into parliaments,” the prime minister explained. “What we want is more learning in schools and less activism in schools.”

“Parliament” derives from the old French word for talk – and the walkouts brought the conversation about climate change into every school. 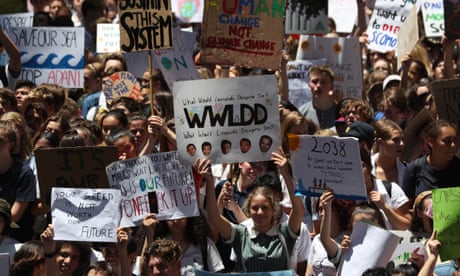 That was what made them so powerful.

In the past, many mainstream campaigns about climate relied on a top-down approach in which some celebrity or another lectured the great unwashed about the need to replace lightbulbs regularly. That method provided rich material for denialists to exploit – and they duly painted environmental crusaders as finger-waving elitists telling everyday folk what to do.

But you can’t go on strike by yourself (at least, not with any success). To build protests of the scale we saw last week, activists needed to persuade their classmates. Like any manifestation of direct politics, the walkout meant ordinary people talking together: about the climate but also about tactics, strategy, and related issues.

Those face-to-face debates (so rare in contemporary life) gave the students their remarkable confidence.

“We are in a period of abrupt climate breakdown,” says the British civil disobedience group Extinction Rebellion. “We have to start acting like the adults we are. We are children no longer.”

Ironically, it’s the youth showing what that maturity means. Across Australia, students marched for action on what Kevin Rudd called, all those years ago, the “greatest moral challenge of a generation” – and politicians responded with adolescent trolling.

“If they’re really serious,” said Liberal MP Craig Kelly (a member of the House of Representatives’ environment and energy committee, no less), “they should make a commitment – no ice-cream, no hamburgers and no trips to the Gold Coast for schoolies, because of all the emissions from the airplanes.”

With the planet burning, we need to take control ourselves | Jeff Sparrow | Opinion | The Guardian
.
.
.
Posted by Jeremy Woodward at 01:51