As in the Christmas carol...

... turtle doves were given the spotlight during a nice little interview on Radio 4 with Isabella Tree of Knepp:

According to the RSPB, Turtle Doves are the most likely bird to go extinct within our shores by 2020. The decline in this lovely species over the past few decades has been catastrophic. In the 1960s there were an estimated 125,000 pairs of Turtle Doves in Britain. That number has declined 96%. In Sussex, considered one of its last strongholds, we probably have fewer than 200 pairs.
Trouble on its long migration route from sub-Saharan Africa is undoubtedly partly responsible for its steep decline: periodic droughts, changes in land use, loss of roosting sites, increasing desertification and hunting in Africa - and then there's the stupendous hazard of crossing the firing squads of the Mediterranean. In Malta alone, the slaughter claims 100,000 turtle doves every season. Around 800,000 are killed in Spain.
But while Turtle Dove numbers are declining across Europe, by far the steepest descent has been in Britain - where we do not shoot them. Here, the decline is almost entirely to do with loss of habitat and food resources.
16 singing males were recorded on 1,100 acres of the southern estate in 2017, compared with three on the whole estate in 1999.

Here's a nice little piece from the Guardian from the summer:

Knepp, West Sussex: A 3,500-acre estate has been transformed from intensively farmed land to a rich natural environment, luring back a bird we are close to losing
Alex Preston 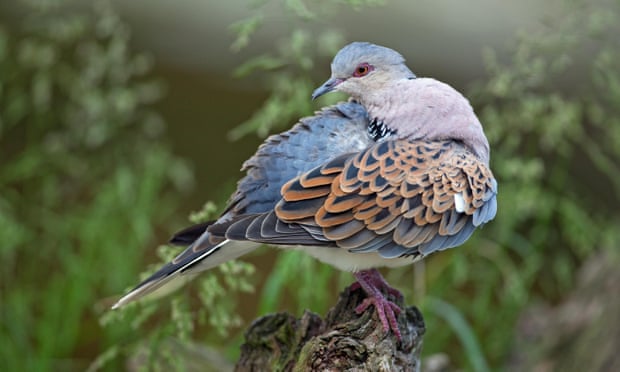 It’s 4.30am and the sky is already light above Knepp, the Sussex estate whose 3,500 acres have been transformed from intensively farmed agricultural land to one of the richest natural environments in the country. I’m with Penny Green, the estate’s resident ecologist, and here to see turtle doves, birds whose mellifluous purring once played a starring role in the soundscape of British summers, but whose numbers have fallen by 93% since 1994.
Streptopelia turtur’s devastating decline is largely down to exactly the sort of commercial farming that Knepp’s owners, Charlie Burrell and Isabella Tree, have set themselves against. It’s fitting, then, that one of the largest populations of nesting doves in the country – 16 pairs – is found right here.
We walk out towards the setting strawberry moon, hanging huge and milky over meadows in which thickets of oak, sallow and hawthorn rise. We walk long diagonals through fleabane and ragwort, the clay beneath our feet baked hard. In the corner of one field, we hear a strange croaking, then spy its source: a nightingale fledgling newly emerged from its nest.
It’s only as we head back that we see him, the turtle dove breasting the air, tawny in the sun, and then a flash of the scalloped intricacy of his back. He takes up residence in a nearby tree and begins to call. I didn’t hear turtle doves in my own childhood, but the sound is so powerfully evocative that it summons visions of old hot summers, of a time before pesticides and decades of poor stewardship drove these birds from our land.
One of Knepp’s white storks rises in the background, and butterflies and dragonflies dart around us, but I’m wholly focused on that stream of notes, which you seem to feel as much as hear. In Tree’s beautiful book about Knepp, Wilding, she describes how hearing the turtle dove gives you the impression of being “caught in the crosshairs of time”. And that is how it is, standing in this new-formed wilderness, listening to a bird that we are so close to losing but that still feels a vital part of our world.
Country diary: wilding calls to the turtle dove | Environment | The Guardian
.
.
.
Posted by Jeremy Woodward at 15:28