Perhaps we need to be considering more than ever the view from Ireland:
Futures Forum: Brexit: and an Irishman walks into a Devon pub

Here's another book review from the Irish Times: 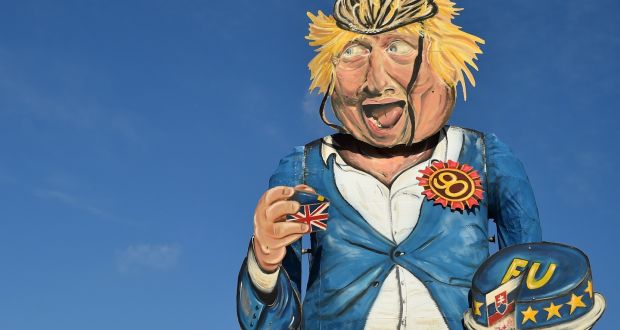 
Book Title:
Heroic Failure: Brexit and the Politics of Pain

Kermit the Frog once memorably sang that “It’s not easy bein’ green”. The contemporary version of his lament – for me and many others – would be that “It’s not easy bein’ English”. Not these days, at any rate.
A few years ago, when England was guest of honour at the Brussels Book Fair, the English invitees were asked to pose alongside an actor representing one of our great national heroes, James Bond. Setting aside the fact that Ian Fleming’s Bond looks increasingly, from today’s perspective, like a violent, racist sociopath (who, despite being quintessentially English, has been portrayed on screen mostly by Scottish, Irish, Welsh and Australian actors), we were not in the least unwilling to be put on stage beside this icon of suave masculine charm and brutal sexual energy. Nowadays, sadly, we would probably be asked to pose alongside Mr Bean.
The English sense of humour, once allegedly admired all over the world, has been turned back against us and in recent years, instead of making the joke, we find that we are its butt: for instance, the German satirical TV host, Oliver Welke, regularly features a sock puppet of Boris Johnson who has to have the basics of EU membership explained to him by his patient “Auntie Angela” Merkel. Wherever I travel in continental Europe, friends and colleagues with desperate concern in their eyes ask me what on earth has happened to us. And now, to add final insult to bitter injury, we have to endure Fintan O’Toole forensically exploring the psychopathology of Brexit in this wounding book-length essay, in which he excludes the Scottish and the Welsh from discussion almost entirely on the grounds that “Brexit is essentially an English phenomenon”.
O’Toole of course is well known (even in England) as both a political and a cultural commentator, and what gives this book its distinction is the fact that, as a critic of drama and literature, he is as adept at analysing character (as revealed by language) as he is at marshalling statistics. The dominant personality of the Leave campaign was Boris Johnson, and O’Toole delivers a piercing critique of his use of irony, which was instrumental in winning the affection of his English audience. “Johnson is not a politician who is humorous,” he writes. “The humour, however laboured, is the politics.” He identifies Johnson as the most skilled and visible proponent of “Brexit camp”. Quoting at length a Johnson speech about being unable to pay for extra toast on an NHS hospital ward – the point of the story being that the NHS ought to be open to injections of private cash – O’Toole observes that the anecdote “conforms precisely to [Susan] Sontag’s definition of camp as the love of the exaggerated, the ‘off’, of things-being-what-they-are-not. It is openly theatrical: the layers of self-parody and mock-heroic bathos are not hidden – they are part of the performance. But it propels these campy exaggerations into the realms of public policy.” Johnson’s spiritual successor, Jacob Rees-Mogg, is viewed in similar terms, as a flipping of the well-loved figure of the English “harmless eccentric” into something closely related but far more lethal: the harmful eccentric, the indulgence of whom has ‘brought clownish absurdity and self-centred recklessness into the heart of political power.’
Besides our campy, irresponsible love of eccentricity - and our bathetic mythologizing of the second World War – the English have also been laid low, in O’Toole’s analysis, by our peculiar sexual pathologies. He is fascinated by the success of EL James’s Fifty Shades of Grey trilogy (when demand was at its height a few years ago, I remember an English publisher telling me that it threatened a national paper shortage) and sees in its story of sado-masochistic contract-signing a metaphor for England’s tortured relationship with the EU: “The political erotics of imaginary domination and imaginary submission are the deep pulse of the Brexit psychodrama,” he maintains. “Wherein lies the vicarious thrill of imagining a wealthy, relatively successful twenty-first-century European country as a marionette controlled by a continental puppeteer?”
There is, I would venture, a camp – even Johnsonian – twinkle in O’Toole’s eye as he pens this analysis, but this should not stop us, in the end, from taking it seriously. He is quite right that the fantasy of Brussels as a domineering, enslaving, colonising power has insinuated itself into the darkest corners of the English imagination in the last few decades (not least because of the drip-drip effect of Boris Johnson’s journalism), and it’s the contemporary English imagination which is the real subject of this book. O’Toole uncovers and dissects it with the deliberate, affectless skill of a virtuoso surgeon. The result, for me, is a wildly entertaining but uncomfortable read. In short, he has nailed us. He has nailed us to the floor with a nine-inch nail. It’s certainly not easy bein’ English these days, and O’Toole, with this pitilessly brilliant book, has just made it at least fifty shades harder.
Jonathan Coe’s latest novel is Middle England; you can read an exclusive extract from Heroic Failure here
‘Fintan O’Toole has nailed us to the floor with a nine-inch nail’
.
.
.
Posted by Jeremy Woodward at 01:00