A solution to our housing problems: inspiration from Holland and Bristol

This week, John Harris in the Guardian looks to some 'viable alternatives' to the lousy and expensive new housing we've been getting too much of:


Too many of the new houses being built in Britain are unaffordable or badly constructed. But viable alternatives exist

In the Netherlands, local authorities use the subtly titled Expropriation Act to buy land at current-use value, which avoids the economics suddenly becoming insane once planning permission is granted. In keeping with the fact that they have power that councils in Britain can only dream about, the same country’s local governments tend to have passionate and exacting planners and in-house architects who insist that their localities get sustainable, well-designed homes.
I spoke last week to an architect who had spent time in the suburbs of Amsterdam and Utrecht, and rejoiced in not just the “unique designs” used for the homes there, but their surrounding environment: “lots of waterways; lush, mature planting; streetscapes that aren’t car-dominated; even nice surface materials on the pavements and roads”. 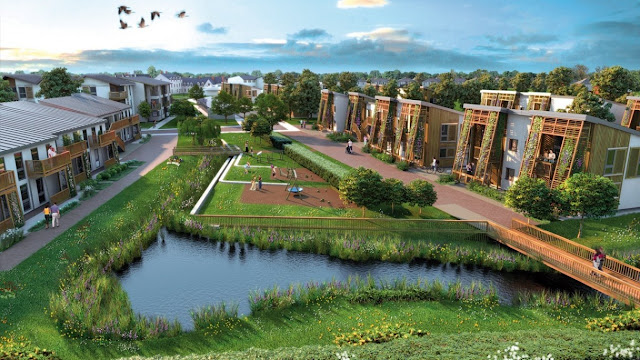 We could achieve such wonders here, if we tried. For the next couple of months, Bristol’s Architecture Centre is running a big season of exhibitions and events centred on the state of British housing and how to do things better. At the suggestion of the organisers, I recently spent a morning at the Hanham Hall development on the eastern edge of the city. This was built thanks to the Carbon Challenge eco-housing plan...
Designed by the award-winning architect Simon Bayliss according to stringent requirements, its homes – split between all types of tenure – are brazenly modern, but thanks to their human scale and inspired use of wood, they feel homely and familiar. Their interiors are intended to be flexible so as to accommodate the needs of families as they change and grow. There are allotments, greenhouses, a spacious park and even beehives. The people I talked to there spoke warmly about “a holiday villa-type environment”, an enduring sense of community spirit, and one unlikely aspect of the development’s story: the fact that it was built by the ubiquitous developer Barratt.
It was a cold, grey day, but it was obvious what all this represented: a small shaft of sunlight illuminating not just how badly things have gone wrong but the fact that, with a reasonable amount of effort and intelligence, one of our most vivid national failures could eventually be put right.

We can solve the UK’s housing crisis – with a little imagination | John Harris | Opinion | The Guardian
.
.
.
Posted by Jeremy Woodward at 12:12